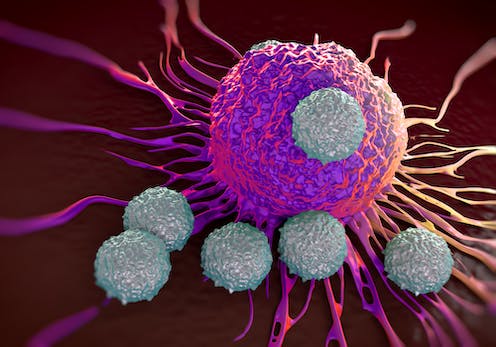 This article is part of a three-part package exploring immunity and infectious diseases around the world.

Human beings are large, complex, multicellular, multi-organ systems. We reproduce slowly and rely on a breadth of mechanisms that allow us to control the myriad of rapidly replicating, simple life forms that have evolved to live in or on us.

The system of defence is referred to collectively as immunity.

The word itself comes from the Latin immunis, describing the status of returned soldiers (Genio immunium) in the Roman state who were, for a time, exempt from paying taxes.

Our immunity protects us from many illnesses, including some forms of cancer. New cancer therapeutics, called immunotherapies, work by boosting our immune cells to fight cancer cells that have found ways to evade them.

The immune system is divided into two interactive spheres, the much older “innate” sphere, and the more recently evolved “adaptive” sphere. A primary challenge for the very specifically targeted cells that form the basis of adaptive immunity is to distinguish “self” (our own body cells and tissues) from “non-self” – the foreign invaders. When that goes wrong, we can develop autoimmune diseases such as multiple sclerosis or rheumatoid arthritis.

The organisms we carry around with us

The human body is host to many organisms over a lifetime. Some are dangerous to health (pathogens), some are benign, and some are necessary for proper functioning.

Most of the genetic material we carry around with us is “non-self”: principally harmless bacteria (called “commensals”) that live in the gastrointestinal tract.

Traditionally, studies focused on the “bad bugs” in our gut that cause diarrhoea and dysentery. But more recently, we’re learning there are also good guys. And there’s a general consensus we need to know more about the “microbiome”, the mass of bacteria in any “clinically normal” gut.

Gut bacteria provide essential vitamin B12 and when they die, release myriad proteins that will be broken down into amino acids, which the body needs. About 30% of our poo is comprised of dead bacteria.

Apart from our microbiome, normal human beings also have a substantial “virome”. Viruses differ from bacteria (which are cells in their own right) in that they are much simpler and can only replicate in living cells.

The greatest number of viruses we carry around are the “bacteriophages”, which infect the commensal bacteria in our gut. Not all “phages” are, however, benign. For example, the toxin that causes human diphtheria is encoded in the genome of a bacteriophage.

There’s also a spectrum of viruses that persistently infect our body tissues. The most familiar are herpes viruses, like those that cause cold sores (H. simplex) and shingles (H. zoster). Both viruses hide out in the nervous system and are normally under immune control. They re-emerge to cause problems as a consequence of tissue stress (such as a sunburnt lip) or as immunity declines with age (shingles). This is why a booster shingles vaccine is recommended for the elderly.

Our innate and adaptive immune systems

The innate system ranges from processes as basic as phagocytosis (ingestion of bacteria), to molecules like the interferons produced by any virus-infected cell that can limit replication. Such innate systems are found right across the evolutionary spectrum and don’t target specific pathogens.

The much younger adaptive immune system is what we stimulate with vaccines. A property of small white blood cells called lymphocytes, it divides broadly into two lineages: the B cells and T cells. These bear the extraordinarily diverse and very specific immunoglobulin (Ig) and T cell receptor (TCR) recognition molecules that detect invading pathogens (bacteria, virus, fungi and so on).

The immunoglobulins bind to “non-self” (foreign) proteins called “antigens”, while the T cell receptors are specifically targeted to “self” transplantation molecules.

The assassins of the immune system are then switched on; the killer T cells that eliminate virus-infected (or cancer) cells. Also activated are the “helper” T cells that secrete various molecules to “help” both the B cells and killer T cells differentiate and do their work.

How does our immune system learn and remember?

All lymphocyte responses work by massive cell division in the lymph nodes (the “glands” in our neck that swell when we get a sore throat). This process is started by small numbers of “naive” B and T cells that haven’t encountered the invader before, and only stops when the foreign invader is eliminated.

The B cells differentiate into large protein-secreting cells called plasma cells, which produce the protective antibodies (immunoglobulins) that circulate for years in our blood.

Most of the T cells die off after they’ve done their job, but some survive so they can remember how to target specific invaders. They can be rapidly recalled to their “killer” or “helper” function.

Prior infection or the administration of non-living or “attenuated” (to cause a very mild infection) vaccines sets up the memory so protective antibodies are immediately available to bind (and neutralise) pathogens like the polio or measles virus. While immune T cells are rapidly recalled to “assassin” status and eliminate pathogen-infected cells.

As you may have gathered from this very brief and far too simplified account, the immune system is extraordinarily complex. And it’s also very finely balanced with, for example, cross reactive responses to bacterial proteins sometimes setting us up for autoimmune diseases.

Another example of autoimmunity is rheumatoid arthritis, which can be triggered by blood-borne chemicals from tobacco smoke that modify “self” transplantation molecules in the joints.

And when we talk about the possible effects of the microbiome, or the “too clean” hypothesis, we’re discussing how exposure to bacteria and viruses can modify that immune balance in ways that directly affect our wellbeing. This is a very active area of research which, given the underlying complexity, presents scientists with big challenges as we seek to reach verifiable conclusions.