When it comes to bees, it seems that nothing really does matter.

As shown in a paper published today, our research demonstrates that the honeybee can understand the quantitative value of nothing, and place zero in the correct position along a line of sequential numbers.

This is the first evidence showing that an insect brain can understand the concept of zero, and has implications for our understanding of how complex number processing evolved. More broadly, it may help us design better artificial intelligence solutions for operating in complex environments.

Bee brains are tiny - but they do get that zero is a number.

There are four stages of understanding the concept of zero in human culture, history, psychology and animal learning.

Stage one: Understanding zero as the absence of something, such as no food on your plate. This first level is likely enabled at an early stage of visual processing. 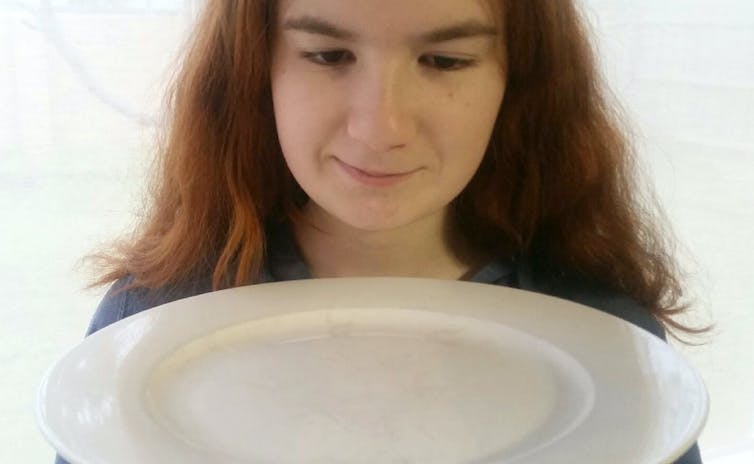 Perceiving nothing on your plate requires understanding the absence of information. 'Adrian Dyer/RMIT University'

Stage two: Understanding zero as “nothing” vs. “something”, such as the presence or absence of light in a room. “Nothing” is thus treated as a meaningful behavioural category.

Perceiving the absence of information relative to a stimulus like a light is the second stage of understanding zero. 'Adrian Dyer/RMIT University'

Stage three: Understanding that zero can have a numeric value and belongs at the low end of the positive number line. For example: 0 < 1 < 2 < 3 etc. (where < means “less than”). 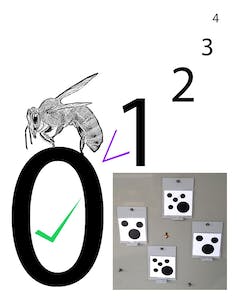 By learning to choose less than options, bees learnt over one day to be able to transfer information and place zero at the lower end of all previously experienced numbers. Scarlett Howard, Adrian Dyer and Jair Garcia/RMIT University

Stage four: Understanding that zero can be assigned a symbolic representation which can be used in modern mathematics and calculations, for example: 1 – 1 = 0.

Our new study shows honeybees have achieved stage three of understanding the concept of zero.

The honeybee now joins the elite few species which have demonstrated an understanding of zero to this advanced level. While rhesus monkeys, vervet monkeys, a single chimpanzee, and one African grey parrot have demonstrated the ability to learn or spontaneously understand the concept of zero, this is the first time that such a high level of cognitive number processing has been observed in an insect.

Why care about zero?

The importance of zero throughout human history is not to be underestimated.

Chinese counting rods used a blank space to help represent a place holder in values, however zero went unnoticed as a number with a quantitative value for centuries. For example, Roman numerals do not have a symbol for zero.

It was not until 628AD that zero had a written record which noted it as a number in its own right by Indian mathematician Brahma Gupta in his book Brahmasputha Siddhanta. This is the first written record to provide rules to use when doing calculations with zero.

The earliest record of the symbolic zero (0) we are familiar with today is from an Indian inscription on the wall of a temple in Gwalior, India (AD 876). Arabic numerals, along with the modern idea of zero, did not reach the West until 1200 AD.

Interestingly, while it took centuries for the concept of zero to be fully understood and utilised in human culture, honeybees have learnt to apply previous number knowledge to demonstrate an understanding of zero within a day when presented with training to promote numerical cognition.

How we asked bees about zero

Bees often forage in complex environments and have evolved visual processing solutions adapted to this life.

Read more: Which square is bigger? Honeybees see visual illusions like humans do

In our research, we tested number processing in bees by individually training them with special apparatus to collect a sugary reward, and learn the rules of “less than” considering the numbers 1 – 6.

An individual bee would need to choose between two numbers each time it returned to the experiment. For example, a bee would be presented with two new numbers (3 vs. 4; 1 vs. 2; 2 vs. 5, etc.) until it had reached, over many learning events, at least 80% accuracy for landing on and thus choosing the lowest number.

Once the bee achieved this, it would be presented with the previously unseen stimulus of “an empty set” representing zero. 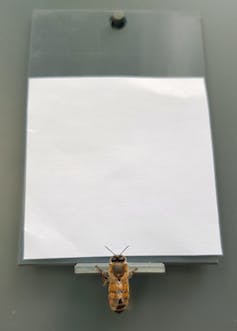 A honeybee chooses to land on the zero option. Scarlett Howard/RMIT University

Surprisingly, bees trained to the “less than” rule preferred to visit the empty set rather than any other higher value number. This means bees understood an empty set was lower in number than a set containing actual elements.

In further experiments, other bees were able to place zero at the low end of the numerical continuum and demonstrated numerical distance effects. Numerical distance effects are demonstrated when accuracy increases as the difference between two numbers increases. The study showed that while bees could differentiate between zero and one, they performed better when the numbers were further apart, such as in the case of zero vs. six.

The next step for research on the processing of zero is to understand how small and seemingly simple brains (like those of bees) represent zero in a neurological sense.

Read more: Plants use advertising-like strategies to attract bees with colour and scent

Andreas Nieder, an expert in numerical competency in animals from the University of Tübingen in Germany writes:

The advanced numerical skills of bees and other animals raise the question of how their brains transform “nothing” into an abstract concept of zero.

This new research on bees has created many new questions in the field and also makes it clear that brain size and complexity does not fully determine intelligence and, in particular, numerical ability.