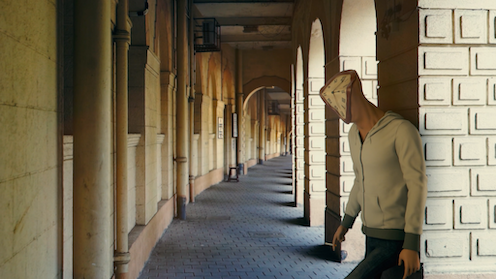 One of the wonderful things about science is that it makes us think about what we value, or what is meaningful to us. It’s not just an objective, dispassionate inquiry into the material world, it’s also a large part of the story about what it means to be human.

That dimension is often missing in science education, but it is brought home beautifully within the collection of films that represent the winners of the 2018 SCINEMA International Science Film Festival, to be screened at various capital cities across Australia this month.

I managed to catch up with the festival in Brisbane this week, so I’ll mention some films that do this exceptionally well.

Read more: Let me entertain you – that's how to get a science message across

The meaning of time

In a playful way, Ninaad Kulkarni gorgeously animates a variety of interviews with people who are asked what time means to them.

The film KCLOC brings out an amazing thing about time — it’s a physical quantity, sure, but it just doesn’t seem as interesting to ask people what they think about mass or distance. It’s a fascinating point that suggests something profound about the human experience with and in time.

More dramatically, in Timelapse writer and director Aleix Castro explores the idea of an implanted chip that blocks mundane work tasks from our consciousness, promising to free us from the daily grind.

Workers move around zombie-like until their work period (perhaps a month) ends. They then return to awareness and enjoy an extended leisure time. A month’s work seemingly passing in a second, and then a week off - and they are well paid for it!

It sounds like a win-win for employers and workers, but what about those periods during which we are working but our loved ones are not? And would we be happy losing large chunks of our lives from memory, even if those memories are boring? How would we learn perseverance, or recognise the exciting times if we have no contrasting experiences?

Maybe we’d want to extend those down times to household chores as well. How much of our lives would we end up living?

One of the most powerful impressions on me was made by iRony, Radheyda Jegatheva‘s adaptation of his poem Seven Billion.

Hand-animated (which adds to the film’s intensity) and extraordinarily creative, iRony explores our relationship with the technology that is meant to connect us, but can rob us of joy and purpose. It’s another call to focus on how we spend our time.

If you have a child or friend who seems to have lost themself in social media, iRony would be a superbly targeted intervention.

Among the shorter films, the significantly longer The Kingdom – How Fungi Made Our World sounds, to the uninitiated like me, a good opportunity to order another wine.

The Kingdom: How Fungi Made Our World trailer.

I just had no idea. Is there really fungus on everything we touch? Do we really breathe in fungi with every breath? (Yes, in case you were wondering.) And is the “g” hard or soft?

Fungi, it turns out, are the unifying evolutionary thread for all complex life on land. No fungi, no us.

Not only do they enable the proliferation of vascular plants over the world, creeping between and within their cells to provide essential nutrients, but they also connect them through giant networks of filaments (hyphae) to form — wait for it — the Wood Wide Web.

Unlike plants and cold-blooded animals, mammals seem to be generally fungus-free zones, as fungi do not like the higher core temperatures of our bodies. That exclusion gave mammals the advantage over other animals immediately after the Cretaceous–Tertiary mass extinction about 66 million years ago, resulting ultimately in the appearance of humans millions of years later.

But it’s not that we don’t get on with fungi at all. Not only did they gift us penicillin (and fungi might also be a solution to new resistant strains of bacteria - superbugs), but consider the yeast that gives us bread… and beer.

For the religiously inclined, it would not seem untoward to imagine that God at some stage said “Let there be fungi”, and all was good.

Grassroots, written and produced by Tegan Nock and directed by Frank Oly, is an outstanding example of how citizens can put scientific findings to use. They don’t always have to wait for a technology to be processed, packaged and delivered to their door by others.

Farmer Guy Webb became convinced of the ability of fungi (is there nothing they can’t do?) to sequester carbon in very significant amounts when added to crops, potentially reducing the impact of global warming.

Rather than wishing “they” would do something about it, one of the agriculturalists straightforwardly says, “we are the they”. It’s an exciting story of one person’s belief - growing into a group’s belief - that individual action based on existing science can have huge consequences.

There was enormous aesthetic value evident in the preview of Planet Earth II – Grasslands, produced and directed by Chadden Hunter. A beautifully filmed and written piece that is breathtaking in how it uses the newest camera technology to make the audience feel they are moving along with the organisms rather than seeing them from afar.

A supercomputer creates a virtual copy of a body that could allow medical treatments and physical therapies to be tailored to an individual’s exact requirements. All done in the safe confines of cyberspace.

It was also thought-provoking to realise how far away we are from being able to model a mind.

The fun of it all

The mindbogglingly mathematical Lily Serna takes us through a Catalyst episode, produced and directed by David Symonds and Nicholas Searle, about using mathematics in decision-making.

Read more: Trust Me, I'm An Expert: The explainer episode

Serna’s lack of pretension around her abilities and her joy in sharing the benefits of it is admirable, and she explains some very sophisticated mathematics with simplicity and clarity.

I wonder if we all have the confidence in mathematics to live by the decision-making algorithm she provides. It’s well worth a try, I reckon.

The festival is a great expression of why science matters, not just in the utility it provides but in the values and meaning it highlights. Facts and values don’t just make good entertainment, together they make good science.