This is the seventh article in our series, Moving the Masses, about managing the flow of crowds of individuals, be they drivers or pedestrians, shoppers or commuters, birds or ants.

Shopping is something we all do, albeit some more reluctantly than others. It is the modern version of hunting and gathering – how we provide essentials and food for our families. We seem to do it effortlessly, moving from aisle to aisle, from store to store, paying little attention to the process. Indeed, many shop on auto-pilot, while their minds are occupied with other things.

As shoppers, we take for granted the shopping landscape. Yet, unlike the natural landscape where our ancestors hunted, our modern shopping centres have been purposefully designed.

But does the purpose-built environment really control everything shoppers do? Research paints a different picture.

What about the power of marketing?

In Ancient Greece, shopping revolved around the agora (a market and meeting place) where merchants sold their wares from small specialist stores or stands. Much has changed since then; we have refrigeration, plastic packaging, cars and the ability to store food for longer, which means we buy more at once. In response, retailers got bigger and bigger, moving from small corner stores to larger supermarkets, hypermarkets and malls.

The shopping mall might seem like the very icon of consumerism, a nefarious attempt to capture shoppers’ money. The mall was actually an attempt to return to the concept of the agora as a public space that invited people to gather together and socialise.

In late 1930s, Victor Gruen, the designer of the first shopping malls, envisaged urban spaces where people would gather and a community could form. This was the first Gruen Transfer, where old-world architectural forms were transferred to modern commercial spaces.

Jon Jerde, who followed Gruen to becoming an influential mall designer, has his own transfer named after him – the Jerde Transfer. This is about transferring a real urban experience into a sanitised and safe “theme park” to shop in.

Somewhere between the first idealistic malls and the later behemoths, the current concept of the Gruen Transfer kicked in: shoppers’ movements shifted from a determined stride (to a particular store) to an aimless wander in an almighty mall. And the concept of impulse buying was born. Perhaps the concept was given currency in the 1980s, where the idea of all-powerful marketers driving desire came to the fore thanks to Rosser Reeves.

Store owners liked to think that by having the perfect shop window, outfitted just so, they could influence customers so much that they’d have no choice but to walk in and buy, buy, buy. Yet recent research (https://www.sciencedirect.com/science/article/pii/S0969698917304769) has found we can predict store sales based on the number of people who walk into the store, and that number depends on foot traffic outside the store. This mathematical regularity suggests the main driver of a store success is its location.

Lessons from the supermarket

Some might think that surely this is wrong, that it’s those crafty marketers and their clever tricks (based on the information they collect about us) that really influence purchases. So, let’s have a look at the marketers’ home turf – the supermarket.

A typical supermarket stocks over 30,000 items and yet a typical household buys just 300 or so unique products per year. That is, they walk past roughly 29,700 products on shelves without putting any of these in their baskets. 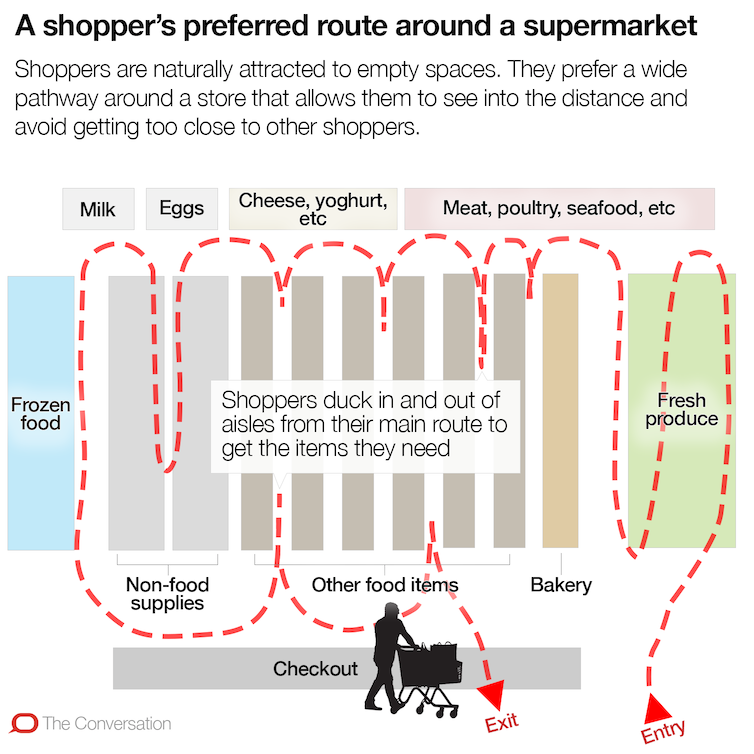 CC BY-ND So, where do shoppers go? US-based shopper scientist Herb Sorensen suggests that shopper movement follows natural patterns, driven by primal instincts. Rather like “stay out of caves because bears live there”, the patterns he sees are people being less likely to go all the way down an aisle when it’s stacked too high, and avoiding crowds. One aspect of this has been coined the “Butt Brush Effect” – shoppers don’t like standing in a spot where other people walking behind might accidentally brush against them. The ‘butt brush effect’: people do not like to be touched from behind and will even move away from products they’re interested in to avoid it.Shoppers are naturally attracted to empty spaces. They prefer a wide pathway around a store or mall that allows them to see into the distance and avoid getting too close to other shoppers. Thus, the most common route around a store is the perimeter of the store, known as the “racetrack”. From that main route shoppers can see down each aisle and duck in and out to get the items they need. Naturally, the shelves at the ends of aisles, known as “endcaps” or “gondola ends”, are the most valuable, simply because more people go past products placed here. So these products get seen (and bought) by more people than products hidden away in the aisles. Someone might argue stores use placement of key items like milk at the back of the store to “lure” shoppers to follow the “racetrack”. However, this is also done for a much more practical reason – milk is often stored at the back because it needs to be constantly restocked without breaking the cold chain (that is, from refrigerated truck to a store fridge). Much the same reason explains the increasing use of the two-way fridge – shoppers take bottles from the front, and staff restock from the back. So, do mall and store environments influence shopper behaviour? Yes, to an extent. But, in most cases the best thing a retailer or a marketer can do is just get out of the way and let the shoppers do their thing. In the words of Paco Underhill, one of the originators of shopper research: No amount of merchandising can deter a shopper from his or her mission. The best you can do is go along for the ride. Paco Underhill explains how retailers plan to influence our shopping, but says we need not be completely at their mercy.You can find other articles in the series here.