Large waves after the loss of sea ice can trigger Antarctic ice shelf disintegration over a period of just days, according to our new research.

With other research also published today in Nature showing that the rate of annual ice loss from the vulnerable Antarctic Peninsula has quadrupled since 1992, our study of catastrophic ice shelf collapses during that time shows how the lack of a protective buffer of sea ice can leave ice shelves, already weakened by climate warming, wide open to attack by waves.

Antarctica is covered by an ice sheet that is several kilometres thick in places. It covers an area of 14 million square kilometres – roughly twice the size of Australia. This ice sheet holds more than 90% of the world’s ice, which is enough to raise global mean sea level by 57 metres.

As snow falls and compacts on the ice sheet, the sheet thickens and flows out towards the coast, and then onto the ocean surface. The resulting “ice shelves” (and glacier tongues) buttress three-quarters of the Antarctic coastline. Ice shelves act as a crucial braking system for fast-flowing glaciers on the land, and thus moderate the ice sheet’s contribution to sea-level rise.

In the southern summer of 2002, scientists monitoring the Antarctic Peninsula (the northernmost part of mainland Antarctica) by satellite witnessed a dramatic ice shelf disintegration that was stunning in its abruptness and scale. In just 35 days, 3,250 square km of the Larsen B Ice Shelf (twice the size of Queensland’s Fraser Island) shattered, releasing an estimated 720 billion tonnes of icebergs into the Weddell Sea.

This wasn’t the first such recorded event. In January 1995, roughly 1,500 square km of the nearby Larsen A Ice Shelf suddenly disintegrated after several decades of warming and years of gradual retreat. To the southwest, the Wilkins Ice Shelf suffered a series of strikingly similar disintegration events in 1998, 2008 and 2009 — not only in summer but also in two of the Southern Hemisphere’s coldest months, May and July.

These sudden, large-scale fracturing events removed features that had been stable for centuries – up to 11,500 years in the case of Larsen B. While ice shelf disintegrations don’t directly raise sea level (because the ice shelves are already floating), the removal of shelf ice allows the glaciers behind them to accelerate their discharge of land-based ice into the ocean – and this does raise sea levels. Previous research has shown that the removal of Larsen B caused its tributary glaciers to flow eight times faster in the year following its disintegration.

Read more: Cold and calculating: what the two different types of ice do to sea levels

The ocean around ice shelves is typically covered by a very different (but equally important) type of ice, called sea ice. This is formed from frozen seawater and is generally no more than a few metres thick. But it stretches far out into the ocean, doubling the area of the Antarctic ice cap when at its maximum extent in winter, and varying in extent throughout the year.

The response of Antarctic sea ice to climate change and variability is complex, and differs between regions. Around the Antarctic Peninsula, in the Bellingshausen and northwestern Weddell seas, it has clearly declined in extent and annual duration since satellite monitoring began in 1979, at a similar rate to the Arctic’s rapidly receding sea ice.

The Southern Ocean is also host to the largest waves on the planet, and these waves are becoming more extreme. Our new study focuses on “long-period” swell waves (with swells that last up to about 20 seconds). These are generated by distant storms and carry huge amounts of energy across the oceans, and can potentially flex the vulnerable outer margins of ice shelves.

The earliest whalers and polar pioneers knew that sea ice can damp these waves — Sir Ernest Shackleton reported it in his iconic book South!. Sea ice thus acts as a “buffer” that protects the Antarctic coastline, and its ice shelves, from destructive ocean swells.

Strikingly, all five of the sudden major ice shelf disintegrations listed above happened during periods when sea ice was abnormally low or even absent in these regions. This means that intense swell waves crashed directly onto the vulnerable ice shelf fronts.

The Antarctic Peninsula has experienced particularly strong climate warming (roughly 0.5℃ per decade since the late 1940s), which has caused intense surface melting on its ice shelves and exacerbated their structural weaknesses such as fractures. These destabilising processes are the underlying drivers of ice shelf collapse. But they do not explain why the observed disintegrations were so abrupt.

Our new study suggests that the trigger mechanism was swell waves flexing and working weaknesses at the shelf fronts in the absence of sea ice, to the point where they calved away the shelf fronts in the form of long, thin “sliver-bergs”. The removal of these “keystone blocks” in turn led to the catastrophic breakup of the ice shelf interior, which was weakened by years of melt.

Our research thus underlines the complex and interdependent nature of the various types of Antarctic ice – particularly the important role of sea ice in forming a protective “buffer” for shelf ice. While much of the focus so far has been on the possibility of ice shelves melting from below as the sea beneath them warms, our research suggests an important role for sea ice and ocean swells too. 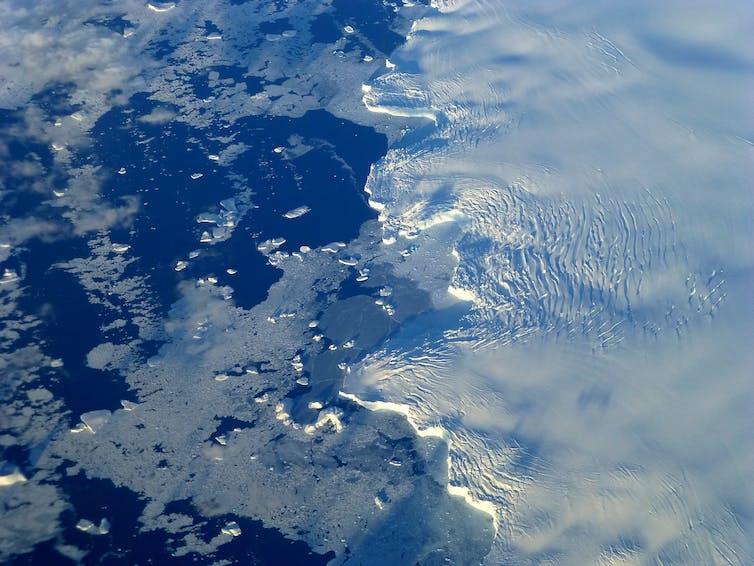 The edge of an ice shelf off the Antarctic Peninsula, with floating sea ice beyond (to the left in this image). NASA/Maria Jose Vinas

In July 2017 an immense iceberg broke away from the Larsen C Ice Shelf, just south of Larsen B, prompting fears that it could disintegrate like its neighbours.

Our research suggests that four key factors will determine whether it does: extensive flooding and fracturing across the ice shelf; reduced sea ice coverage offshore; extensive fracturing of the ice shelf front; and calving of sliver-bergs.

If temperatures continue to rise around the Antarctic, ice shelves will become weaker and sea ice less extensive, which would imply an increased likelihood of future disintegrations.

However, the picture is not that clear-cut, as not all remaining ice shelves are likely to respond in the same way to sea ice loss and swell wave impacts. Their response will also depend on their glaciological characteristics, physical setting, and the degree and nature of surface flooding. Some ice shelves may well be capable of surviving prolonged absences of sea ice.

Irrespective of these differences, we need to include sea ice and ocean waves in our models of ice sheet behaviour. This will be a key step towards better forecasting the fate of Antarctica’s remaining ice shelves, and how much our seas will rise in response to projected climate change over coming decades. In parallel, our new findings underline the need to better understand and model the mechanisms responsible for recent sea ice trends around Antarctica, to enable prediction of likely future change in the exposure of ice shelves to ocean swells.