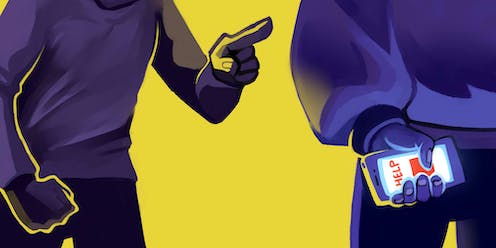 With growing recognition that domestic violence can be perpetuated using technology, there has been a an increase of news stories that focus on how abusers use it to coerce and control victims.

For example, when a man stole his ex-partner’s laptop so he could monitor her private Facebook messages. Or when a husband installed a GPS tracking device in his daughter’s doll to monitor his wife’s whereabouts without her knowledge.

But there’s also considerable potential for victims to use new technologies to hold abusers accountable.

Technology as a sword and shield for victims

Those experiencing domestic violence can use technology as both a sword and shield. Here are just some of the ways technology can protect, empower and improve victims’ access to justice:

In a recent study involving 65 victims in Brisbane, 18 admitted they used technology to make smartphone recordings of their abuser’s behaviour for various purposes. Reasons included the collection of evidence to use in court, convincing themselves their ex-partner is in fact abusive, and for the purpose of talking to the police and lawyers.

There are now apps that help victims record their abuser’s behaviour, and access relevant services, information and emergency contacts on their smartphones, such as Aurora, iMatter, and Smartsafe.

Read more: The smart home could worsen domestic abuse. But the same technology may also make us safer

Some victims have also been supplied with a 3G Safety Watch. These watches look and function just like a typical watch, but they have an emergency button that immediately connects to a 24-hour call centre that subsequently notifies police. Australian Olympic swimmer, Dawn Fraser, who has revealed she was subjected to violence by her late husband, has actively promoted the use of safety watches.

In Queensland and Victoria, safety cards have been trialled and reported to be “overwhelmingly successful” in protecting victims from further abuse. These cards allow victims to press a button to alert a 24/7 call centre. The operators are then able to listen to what is being recorded via the card and relay the information to police.

In a pilot study involving 21 women, abusers were told victims were given safety cards as a way of deterring them from breaching intervention orders. Before using the cards, these women experienced up to 40 or 50 breaches a day. After they received the cards, breaches ceased.

The Victorian government seems to be leading the way in the use of technology to tackle domestic violence. It has actively embraced technology as part of its Personal Safety Initiative that aims to “keep women and children safe from family violence in their own homes”.

Strategies implemented to help achieve this aim include the installation of CCTV cameras in victim’s homes to deter abusers from breaching protection orders.

Governments in other Australian states, including Queensland and NSW, have also rolled out body-worn cameras to assist the police in evidence gathering.

Technology is not a cure

It would be misguided to believe technology will fix the problem of domestic violence. The adage “prevention is better than cure” is true. Combating victim-blaming attitudes and education directed at the community are vital in preventing domestic violence.

And, of course, technology has its drawbacks. For example, CCTV cameras and GPS anklet bracelets are prone to technical problems, which prevent these devices from sending timely alerts to authorities. They can give victims a false sense of security, leading some people to be less cautious about their own safety.

Some observers have questioned the utility of CCTV cameras and recommend against placing too much reliance on such footage in criminal proceedings.

And while technology has the potential to deter abusers temporarily, it may not be an effective long-term deterrent.

Read more: How working with men and boys could stop domestic violence

Another issue is not all victims can afford or access safety devices without government funding. In 2015, the Federal government claimed A$17 million was going to be invested to “keep women safe in their homes” by enabling “women to get CCTV, to get panic buttons, to get better security systems”.

Whether this will help less wealthy victims to access safety devices is a question that requires investigation.

Nevertheless, the evidence to date shows technology has much to offer victims of domestic violence. So we shouldn’t be telling victims to simply “stop visiting Facebook or using devices” and to “stay away from social media”.

Instead, we should be encouraging them to pick up their digital devices to share their stories and seek the help they deserve.