Published today, my new paper written with co-authors Gavin Young and John Long provides evidence that even 400 million years ago, life on coral reefs was already diverse. The research describes Brindabellaspis, a bizarre fossil fish with a platypus-like snout.

The fish was discovered at a fossil reef ecosystem bordering Lake Burrinjuck in New South Wales. The Burrinjuck reefs were built and inhabited by organisms very different from those around today.

Read more: Now you see us: how casting an eerie glow on fish can help count and conserve them

Brindabellaspis is named after the nearby Brindabella ranges. Some detail is required to explain just how odd this fish was. 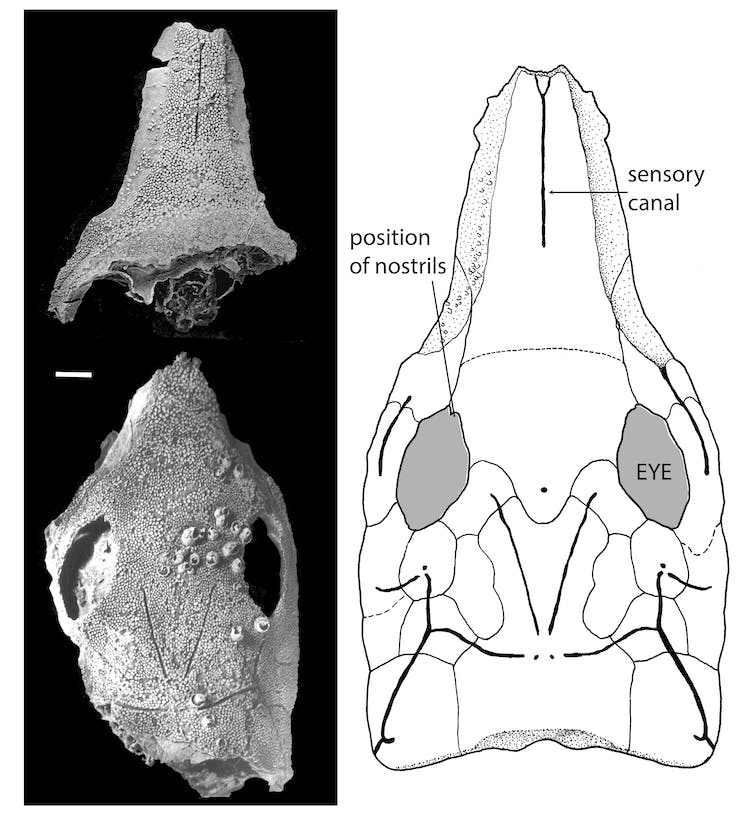 Left: two key fossils of Brindabellaspis, the upper one showing the elongate snout and the lower one a more complete skull, but missing the most anterior part. Right: A skeletal reconstruction of the skull of Brindabellaspis, viewed from above. Ben King and Gavin Young, author provided

Brindabellaspis had eyes on the top of the head, facing upwards. In front of the eyes the skull was stretched into a long and broad snout. The inside of this snout was packed with a complex web of nerves and blood vessels. On the upper surface was a groove that housed part of the lateral line system, which detects water movement. However, this particular groove in Brindabellaspis is in a position that is unknown in any other vertebrate.

Even weirder was the creature’s nose. The nostrils are on top of the head, and the nasal organs were housed in the corners of the eye sockets on either side.

The final surprise is the jaw of Brindabellaspis. Although not preserved, we can reconstruct the position of the jaws based on attachment points and the paths of nerves. We can tell that they must have been attached well forward. In fact, the entire jaw apparatus was probably in front of the eyes.

There is no exact modern equivalent to Brindabellaspis, but the combination of the upward-looking eyes and the long snout (which probably had a soft tip) suggests that it may have been a bottom-feeder. The snout, or “bill” may have been used to detect hidden prey.

Read more: The shocking facts revealed: how sharks and other animals evolved electroreception to find their prey

The coral reefs around Lake Burrinjuck are the oldest well-known tropical reef ecosystem. Despite its age (400 million years), the inhabitants can in no way be described as primitive or unspecialised. Brindabellaspis is just one example from a fauna that includes more than 70 known species: from a tiny bony fish to large possible filter-feeders.

It is clear that ancient reefs were inhabited by many species of ecologically specialised fish.

However, the Lake Burrinjuck fauna also highlights a major difference between reef ecosystems at different points in time. Although coral reefs have always been diversity hotspots, the groups of animals making up the ecosystems have changed drastically.

Brindabellaspis, for example, is a placoderm, a group of jawed vertebrate, often known as the “armoured fish”. Placoderms were the dominant fish group in the Burrinjuck reefs, followed by lungfishes.

Another reef from a similar time period, the Gogo reef in the Kimberley region of Western Australia, is also dominated by placoderms and lungfishes.

Today the placoderms are completely extinct, while the lungfishes are reduced to just six living species worldwide (less than are known from the Burrinjuck and Gogo fossil sites alone) – all of which live in fresh water.

Modern reefs, on the other hand, are dominated by teleost fish, a group that first appeared around 230 million years ago, long after the Burrinjuck reef.

The changing face of reefs through time

A similar story applies to the reef-builders themselves. The Burrinjuck reef consisted mainly of a group of corals known as tabulate corals. The Gogo reef is largely built by stromatoporoids which are actually a type of sponge, not corals at all. 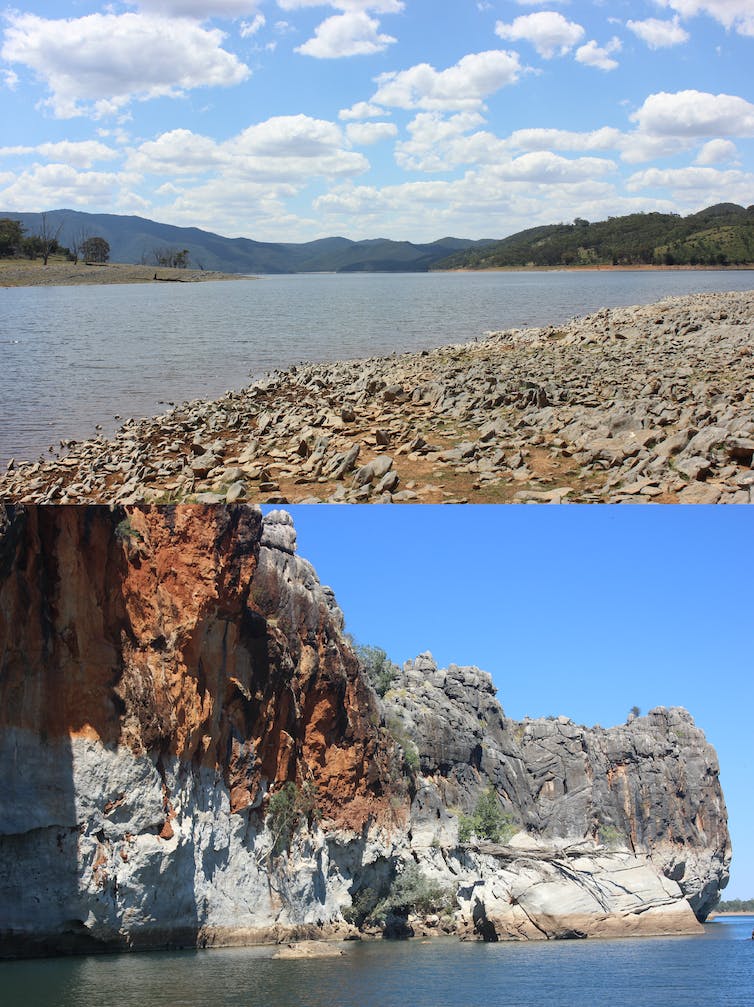 Top: The Early Devonian fossil site on the shore of lake Burrinjuck. Bottom: Another Devonian reef, at Windjana Gorge in the Kimberley. These reefs were built by tabulate corals and stromatoporoid sponges, groups that have since gone extinct. Ben King

Tabulate corals and stromatoporoids were wiped out in the end-Permian mass extinction 250 million years ago. This may have been driven by enormous volcanism at the time, contributing carbon dioxide to the atmosphere, and leading to climate change and ocean acidification.

Reefs did not reappear for several million years after the end-Permain extinction. Eventually new reef-building organisms emerged, including the scleractinian corals, the familiar corals of today.

Another reef-building organism that thrived during the time of the dinosaurs was a strange type of bivalve mollusc called the rudists.

There seems to be a clear pattern. Reef ecosystems have always been diversity hotspots, but the groups of animals that build and inhabit them have changed, as extinctions wipe out old groups and new ones evolve.

Read more: $500 million for the Great Barrier Reef is welcome, but we need a sea change in tactics too

It is well documented that coral reefs face an uncertain future in the face of human induced climate change. If we do drive them to extinction, it is probable that reefs will eventually return in some form, although probably not for several million years.

It is far harder to predict what these future reef ecosystems will look like. The oldest known tropical reef fish ecosystem contained Brindabellaspis, an evolutionary oddity not quite like anything that has evolved before or since.

I expect that the reefs of the future will contain their own specialised and unique organisms.