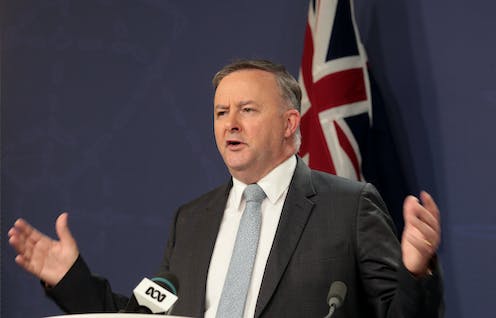 Labor frontbencher Anthony Albanese has urged Labor to “engage constructively” with business, empower its party branches and make sure it avoids “allowing tactics to marginalise strategy”, in a speech that will be seen in the context of leadership.

Albanese’s Gough Whitlam Oration comes against a background of speculation that Bill Shorten’s leadership could come under pressure if Labor did badly in the Super Saturday byelections on July 28. Albanese is considered the only alternative to Shorten.

The address was carefully crafted to keep away from any direct criticism of Shorten, but it had a clear subtext. In saying what Labor’s approach should be, Albanese was also differentiating himself from Shorten who, for example, has been criticised for being too “tactical”.

Albanese’s tone on business contrasted with some of Shorten’s more strident attacks on the top end of town.

He noted that “successful Labor governments collaborate with unions, the business sector and civil society to achieve positive outcomes in the national interest”.

Criticising Malcolm Turnbull for setting business and unions against each other, he said a better course would be to encourage collaboration and compromise.

“That’s the approach of the best Labor governments. Our job is not to sow discord. It is to bring people together in the service of the national interest,” he said.

“Labor doesn’t have to agree with business on issues such as company tax rates, but we do have to engage constructively with business large and small.

Referring to his area of infrastructure and transport, he said he had maintained a close working relationship with the sector.

Albanese also confronted the issue of “aspiration”, which the government is using to attack Labor, especially on the back of its tax cuts legislation which passed this week. The government is claiming the ALP rejects or doesn’t understanding the aspirations of Australians.

Albanese conceded the importance of aspiration - but sought to cast it differently.

“The key to an effective plan for government is an understanding of the aspirations of our fellow Australians,” he said. “We in Labor must always ask ourselves, ‘what do Australians want out of life and how can we help them achieve it?’”

Malcolm Turnbull or Scott Morrison would say people wanted more money, Albanese said, but “I’ve got a different view. Australians do care about quality of life. But they define quality of life as something more than the value of their share portfolio or how much money they have in the bank”.

They wanted happy and productive lives and to build a society where their children had more opportunities than themselves, he said. “While Australians have personal aspirations, they extend beyond individual needs to family, community, environment and indeed, to encompass a fair nation.”

Albanese said Labor needed to recognise the importance of its branches to understanding what was happening in Australia.

“This is not 1950, when most Australians were members of trade unions. Indeed, many people from working class backgrounds are not members of unions because they were beneficiaries of Gough Whitlam’s education reforms,” he said.

“We cannot afford to ignore this demographic. We need the energy and ideas of our membership.

Labor must empower our membership by giving them more direct say in elections for public office and internal positions.

"Labor must also maintain our internal processes that emphasise policy making from the bottom up.

"Policy ideas that come from branch meetings or workplaces are gold. Sometimes they are ahead of their time. But they are always valuable,” he said, pointing to the push for marriage equality, that came from the community, up through the party and ultimately went through parliament.

Albanese trod carefully on refugee policy. “No mainstream politician believes in open borders, but a policy that uses its prolonged treatment of detained people as an ongoing deterrent to others has a deep flaw at its heart.

"Labor supports offshore detention and regional processing, in order to stop the people smuggling trade. But we call out the government’s failure to settle refugees in third countries, despite the clear offer of assistance from countries including New Zealand.

"You can be tough on people smugglers without being weak on humanity. You can protect our borders without losing our national soul.”