In one foul-mouthed phrase, Senator David Leyonhjelm has turned a debate about the safety of women into a sleazy political sideshow.

Claiming – without a shred of factual support – that he had interpreted Senator Sarah Hanson-Young as having said words to the effect of “all men are rapists”, Leyonhjelm called across the chamber that she should “stop shagging men”. Confronted by her afterwards, he told her to “fuck off”.

It is one more example of the debasement of political debate in Australia, aided and abetted by elements of the media, in this case Sky News. Its Outsiders panel of Rowan Dean and Ross Cameron gave Leyonhjelm a platform on which he repeated his offensive remarks, and sat back obligingly while he did so.

Only when the network was deluged with complaints did Cameron apologise for the pair of them, and the network took its own action – suspending not Dean and Cameron but the nameless and faceless young female producer who put up a caption at the foot of the screen bearing Leyonhjelm’s words.

Read more: Madonna or whore; frigid or a slut: why women are still bearing the brunt of sexual slurs

Sexism and sexual innuendo are nothing new in politics. Cheryl Kernot, one-time leader of the Australian Democrats who had an affair with Labor’s Foreign Affairs Minister Gareth Evans and defected to Labor in the late 1990s, was the butt of some crude slanging on the floor of the parliament.

But since June 24, 2010, when Julia Gillard deposed Kevin Rudd as Labor Prime Minister, these phenomena seem to have got palpably worse.

The reasons are necessarily speculative, but over the intervening eight years there have been a series of developments that might help to explain it.

One has been the explosive arrival of social media and its adoption as a tool of propaganda by all who want to make themselves heard, regardless of taste, harm or substance. Facebook, launched in 2004, went global in 2006, the same year that Twitter was launched. YouTube appeared in 2005, Instagram in 2010 (acquired by Facebook in 2012) and Snapchat in 2011.

Whatever benefits they have brought – and there are many – they have also brought trolling.

During the prime ministership of Julia Gillard, a vast amount of trolling was directed at her. It was gross in its extremism and vulgarity. Much of it was crude pornography. There was incitement to violence and unbridled misogyny. Research by Anne Summers for her 2012 Human Rights and Social Justice Lecture at the University of Newcastle, revealed just how vile this online assault became.

The poison seeped out into the wider public discourse, where inevitably elements of the mainstream media magnified it.

Notable contributors to this were commercial radio talkback shock jocks Alan Jones, Ray Hadley and Chris Smith. Their depictions of, and remarks about, Gillard were disgustingly offensive. Not only were they sexist, extremist and malicious, but in Jones’s case involved encouragement of the idea that the prime minister should be dumped at sea.

And then, of course, there was the infamous question about the sexual orientation of the prime minister’s partner.

Portrayals of Gillard by other elements of the mainstream media, especially the newspapers, were generally less grotesque, but raised important ethical issues just the same.

The most common, and in some ways the most difficult to pin down, concerned the passively neutral way in which they covered the grossly disrespectful public attacks on her, just as Dean and Cameron did on Sunday.

An egregious example was the coverage of the rally outside Parliament House in 2011 when the leader of the opposition, Tony Abbott, gave legitimacy to sentiments such as “ditch the witch” and “bitch” by allowing himself to be photographed in front of placards bearing those words. 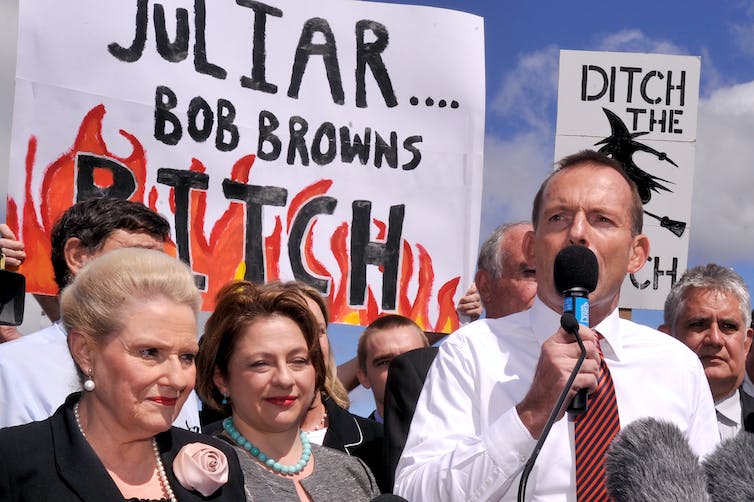 A more recent development, also made possible by the internet, has been the rise of the #metoo movement, in which women who previously felt powerless to speak out about sexual harassment are now doing so, bringing down some powerful men such as Harvey Weinstein in the process.

This has produced a backlash consisting of a complicated mix of male dubiety about the exact nature of sexual harassment and irritation by some feminists at what they see as an apparent weakening of women’s agency.

The fact there is a backlash at all doubtless encourages those who wish to say that attention to sexual harassment is overdone, and we should get back to a bit of good old-fashioned slagging of the kind epitomised by Leyonhjelm’s remarks.

A further factor might be that the boundaries of privacy have shifted, so sexual references that would have been deemed off-limits a decade ago are now shared on social media. Perhaps this is having a desensitising effect on standards of public taste.

Trends in public standards influence editorial decision-making. Stories are published that previously might not have been, or might have been toned down.

Read more: View from The Hill: Parliament should care about its reputation even if Leyonhjelm doesn't value his

As professional mass media try to keep pace with developments in social media, editors may feel they will be left behind if they don’t swiftly adapt to these changing mores and become more libertarian in their decision-making.

In these ways, boundaries in public taste and decency shift over time. However, Leyonhjelm has clearly put himself beyond the pale. Sky News obviously recognised this and felt an apology was necessary, even if Leyonhjelm himself does not.

Meanwhile, it is sobering to reflect on the worst consequences of disrespectful attitudes to women. The shocking rape and murder of Eurydice Dixon in Melbourne last month – which gave rise to the debate in which Leyonhjelm made his disgraceful interjection – has rightly led to an outpouring of community outrage and grief.

The 2018 report of the Australian Domestic and Family Violence Death Review Network, which draws on data from all the coroners’ courts in Australia, stated that between July 1, 2010 and June 30, 2014 there were 152 intimate partner homicides across Australia that followed an identifiable history of domestic violence.