Ten previously forgotten Aboriginal names for 19th century sites and suburbs of Melbourne have been recently unearthed at the Melbourne Museum. These include the names for Fitzroy (Ngár-go), Richmond (Quo-yung), Collingwood (Yálla-birr-ang) and Brunswick (Bulleke-bek).

These names were in a cache of notes made by Alfred William Howitt, an anthropologist and Gippsland magistrate. His jottings appear to be records of conversations he had sometime between 1897 and 1901 with William Barak, ngurungaeta (leader) of the Wurundjeri-willam, the traditional owners of what is now northern Melbourne, and Dick Richards, Barak’s fellow Kulin countryman. (The Kulin was an alliance of Aboriginal nations in central Victoria.)

Howitt’s palm-sized, leather bound notebooks, written in his barely legible hand, were not precise or verbatim records of these conversations but aides to memory. Held in the museum since the 1950s as a small part of his extensive collection, they are difficult to decipher and require expert scholarship to decode. Throughout one notebook we can see that Howitt has jotted down Aboriginal names, mostly in the Woiwurrung language once spoken in the Melbourne area, corresponding to landmarks and municipalities that arose in Melbourne town during Barak’s lifetime. (He lived from around 1824 to 1903).

Although there is no accompanying map, these names identify landmarks and perhaps sites of Ancestral stories on land owned by Barak’s clan and beyond. They add some 10 new locality names and further tantalising details to what is already known from other publications. 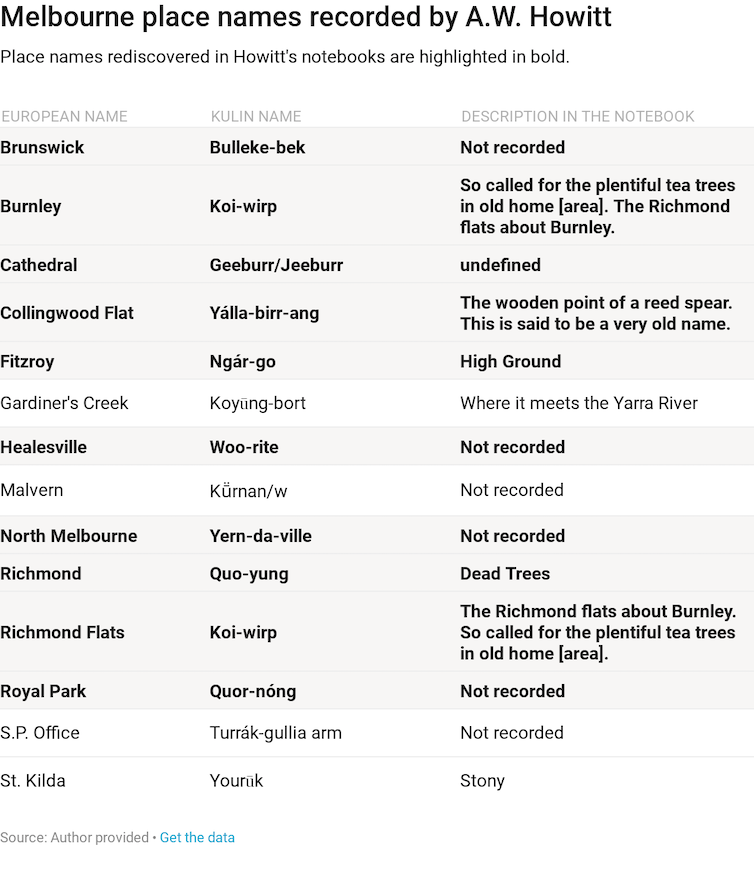 Read more: Explainer: the importance of William Barak’s Ceremony Aboriginal Melbourne Fitzroy, for example, the first suburb of Melbourne gazetted in 1839 and the first municipality beyond the Melbourne borders, is listed in Howitt’s notebook as Ngár-go, meaning “high ground”. Although a Woiwurrung name for the Fitzroy area has not been noted before, the records of colonist Daniel Bunce include “N’gorack”, a similar term to describe a “mountain, peak or hill”. The suburb of Brunswick corresponds to Bulleke bek, a term that appears to include the suffix “bik” meaning “ground/country/place”, although Howitt’s English gloss for this name is difficult to decipher. His handwriting is so tiny and rushed that he appears to have either written “flat country with scattered trees” or “flat country where scott’s work”. 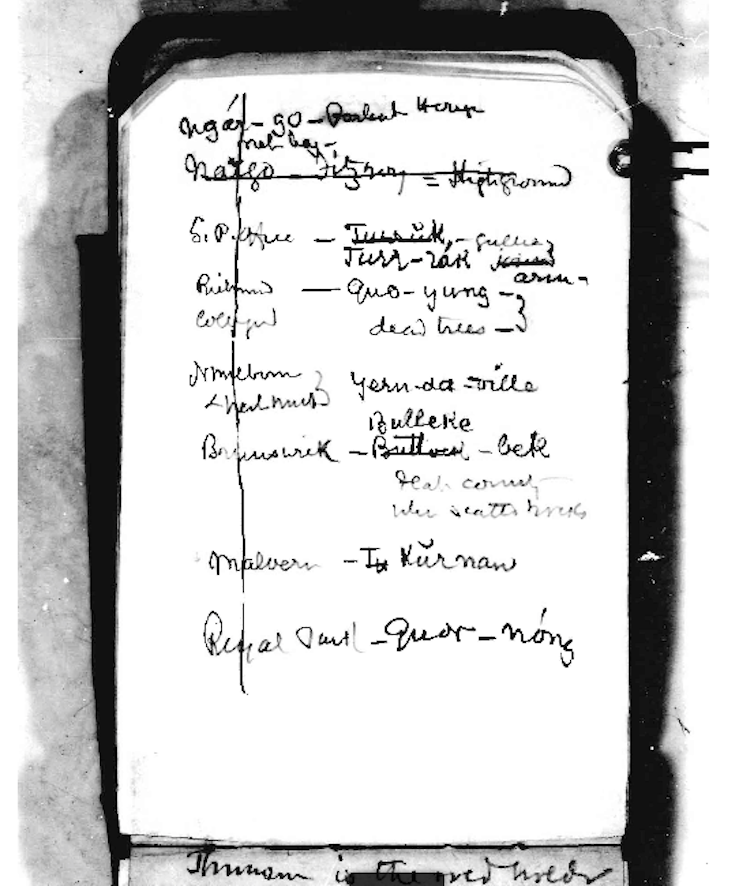 An extract from Howitt’s place names notes, including the word for Brunswick, Bulleke bek. Melbourne Museum, XM765, Author provided The boundaries of European suburbs or municipalities did not, of course, correspond with the pre-existing Aboriginal conceptions of place. We have to acknowledge that we do not exactly know what Barak and Richards were referring to when they provided Howitt with these terms. Did they refer to areas within a particular clan boundary (usually called an “estate” in anthropological parlance) or were they the names of very specific sites; perhaps a tree, a rock, a bend in the river or a hill? The truth is that in the absence of more precise geospatial information we will never know. 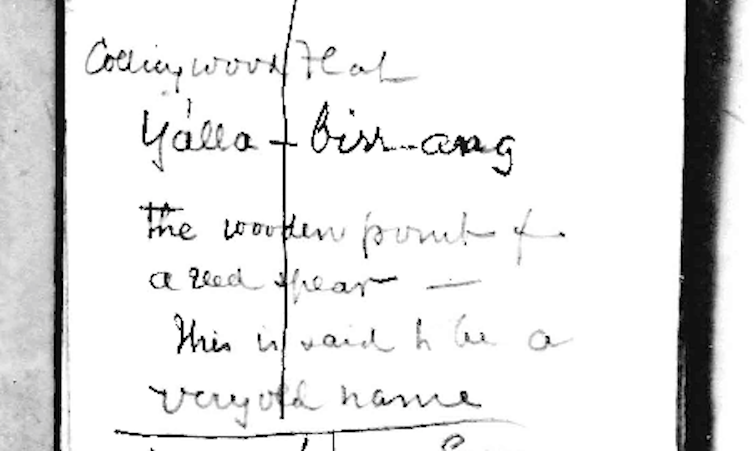 An extract from A.W. Howitt’s notebook showing the name for the ‘Collingwood Flat’. Melbourne Museum, XM765, Author provided These names do nevertheless add further details to an alternative vision of Australia’s fastest growing metropolis. Some names describe land use or vegetation that have in most cases been eradicated, others are suggestive of ancestral stories. The term for Collingwood Flat, Yalla-birr-ang, for example, is described as “a very old name” that means “the wooden point of a reed spear”. This may reference the place in a story where an Ancestor fashioned a spear point, or fixed one. To complicate things, though, a very similar term, yallanēbirong, was listed by an earlier ethnographer not as a place name, but as a word for “blanket”. Indigenous words, phrases and place names have been taken up and used in mainstream Australia since colonisation, but often with a limited appreciation of their nuance or complexity. Universities, for example, are eagerly adopting Indigenous names to furnish their meeting rooms and public spaces. Some local councils are keen to source Indigenous names for new parks, river ways and streets. And while the recuperation of this material is essential for recognising and acknowledging Indigenous presence (deep into the past and ongoing), interpreting this material is not straight-forward, as linguistic and anthropological literature has shown, especially when it comes from scant archival material. The Woiwurrung name for “Cathedral”, “Geeburr” in Howitt’s notes is especially intriguing and difficult to decipher. It may refer to the site of one of the two Melbourne Cathedrals that were completed just prior to these conversations taking place. St. Pauls was largely finished in 1891, while St Patricks, situated on the high ground identified as Ngár-go (though further east than the borders of Fitzroy), was consecrated a little later in 1897. Or, perhaps “Geeburr” is a generic reference to a place recognised as “sacred” by Aboriginal people and not a specific place name at all? The only other name referring to a building rather than a place is the “S.P. Office”, presumably meaning the office of the Superintendent of Police, which Howitt records as “Turrák-gullia arm”. Read more: The Murri Book Club and the politics of reading for Indigenous Australians The trials of translation Place names throw up many linguistic issues that we need to consider in our analysis. Aboriginal languages in Victoria had sounds not used in English which could easily confuse European scribes. Take the name for the River Yarra. In 1876, Robert Brough Smyth recorded the Woiwurrung name for the river as “Birr-arrung”, but failed to tell us from whom or when it was collected. Most Melburnians will now recognise this in the name for the large green-space located nearby to Federation square, Birrarung Marr. However many years earlier, Rev William Thomas made a sketch map of Aboriginal names for the rivers and creeks in the Yarra valley. He wrote “Yarra Yarra or Paarran” next to the outline of the course of the river. Melbourne still uses a derivative of this word, Prahran, for one of its suburbs, although it is not beside the river. Edward M. Curr, in his 1887 book The Australian Race, recorded the name for the river as Bay-ray-rung. In fact these four words, Birrarrung, Paarran, Bay-ray-rung and Prahran, are different spellings of the same word. The original word included sounds we can’t write in English, and we cannot be sure of the original pronunciation (as there are no audio recordings of fluent speakers of the Kulin languages). We can at least say though, that this was a place name associated with the river, perhaps related to the word for “mist” or “fog”, that was elsewhere recorded as “boorroong” or “boorr-arrang”. The more commonly known name “Yarra” however came from surveyor John Helder Wedge, who upon asking a Wathawurrung speaker from the Geelong area what the cascading waters on a lower section of the river were called, exclaimed “Yanna Yanna”, meaning “it flows”. Wedge’s mishearing and misunderstanding became the accepted name of Melbourne’s iconic waterway. Howitt’s scrambled notes conjure the difficulties of precolonial interaction and cross-cultural understanding in early Melbourne but they also highlight the challenges of post-colonial recognition and adjustment. The faint echoes of the conversations between Richards, Barak and Howitt resonate from the 19th century as the citizens of present day Melbourne wrestle with our colonial heritage. This research is part of a large multi-institutional project on colonial records involving Aboriginal communities, historians, linguists and anthropologists, led by Deakin University in partnership with Melbourne Museum. The authors would like to acknowledge the Wurundjeri Council for their assistance in preparing this article. Permission for access and use of any cultural information, language, and place names within this article must be obtained by written approval from the Wurundjeri Council.