Police in the UK are still hunting the source of a Novichok poisoning as they investigate the murder of a woman exposed to the deadly nerve agent.

This is the same type of nerve agent that was used in March in the poisoning of former Russian spy Sergei Skripal and his daughter Yulia in Salisbury, Wiltshire, UK. They both survived the attack and have since been released from hospital.

But Dawn Sturgess, 44, died in hospital on Sunday evening after falling critically ill on June 30. Her partner Charlie Rowley, 45, who was also exposed to the nerve agent in Amesbury, about 12km north of Salisbury, remains critically ill in hospital.

Read more: How Novichok is different from radioactive poisons – and what this means for decontamination

Britain’s Home Secretary Sajid Javid had earlier told MPs that testing by expert scientists in chemical warfare at the Porton Down laboratory confirmed they were exposed to a “nerve agent of the type known as Novichok”.

So was it the nerve agent that was used against the Skripals, and if so, how was the couple exposed to it several months later? 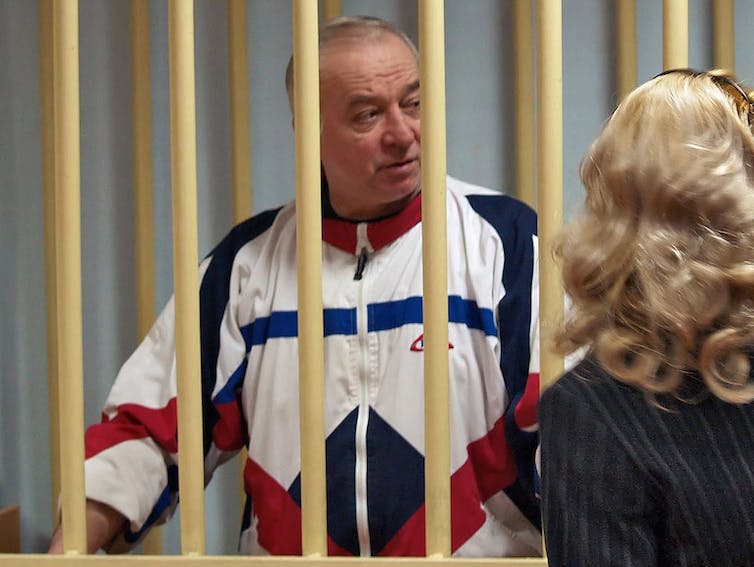 A 2006 photo of Sergei Skripal, sentenced to 13 years in prison on charges of spying for the UK and later in 2010 was exchanged in a spy swap. EPA/Yury Senatorov/Russia Out

Novichock is not one chemical agent. It is the nickname (it roughly translates as a cute version of “newbie” in Russian) of a group of compounds that former Russian chemist Vil Mirzayanov said were under development in the Soviet Union.

The first report of any Novichok-like compound being made outside the Soviet Union weapons program was an Iranian academic paper in 2016. In that research, a group synthesised a particular subgroup of agents, but not the subgroup found in the UK.

The Russian news agency TASS reported in March that the Russian ambassador to the UK claimed the UK had passed information to him claiming the compound used in the Skripal case was identified as A-234 (the Novichok agents were given code numbers starting “A-”).

That compound isn’t in the Iranian paper.

After the March incident, the UK government said the compound used was a novel agent of military quality. The Organisation for the Prohibition of Chemical Weapons (OPCW) was invited to conduct a parallel investigation, and OPCW’s report supports the UK government conclusions.

A classified annex of the OPCW report contains the identification information, but that material has not been publicly released.

So, it seems that no experimental information about the properties of the compound at the centre of this investigation has been published in any open literature.

Although almost nothing is publicly confirmed about the compound in question, it is assumed to have similar properties to VX nerve agent. This was used in the murder of Kim Jong-Nam, the half-brother of North Korean leader Kim Jong-Un, killed in Kuala Lumpar in 2017.

VX is described as having the texture of clear, almost colourless motor oil. Let’s assume that A-234 has similar properties and think about what may have occurred in the latest incident. How would someone go about dispersing a nerve agent in close quarters, and how could it suddenly pop up 12km away four months later?

In the case of Kim Jong-Nam, the solution was to put the nerve agent onto a cloth, and then wiped it onto his face.

In the case of Sergei Skripal it is thought the agent was applied to his door, and that he (and the police officer who was taken ill) became contaminated after touching the door. The question then becomes: how did the nerve agent get onto the door?

If we assume that A-234 is similar to VX, that would mean that the same method used on Kim Jong-Nam could work (get a cloth, put some agent on it, wipe the agent on the door).

Trials have been carried out investigating how long VX would persist in a temperate environment. The answer seems to be that the compound may be present on grass in toxic quantities for a couple of weeks. Small amounts can often be found long after, but exposure to very small quantities is not usually hazardous.

One possibility is that the compound could have been placed in a spray bottle, similar to those in which perfumes are contained. Spraying the agent onto a door may not alert someone observing the action.

If that was the case, then the person applying the agent would also be at risk. But by using protective clothing such as gloves and by taking nerve agent pre-treatment (and yes, by being very careful when conducting the application), it may be possible.

British police suggest that the couple interacted with some kind of container, receiving a higher dose of agent than either of the Skripals.

Chemical weapons need to be reasonably stable when stored away from air and light, so it is entirely possible that if any container was sufficiently protected from the environment, the agent could survive for the several months between these two incidents. 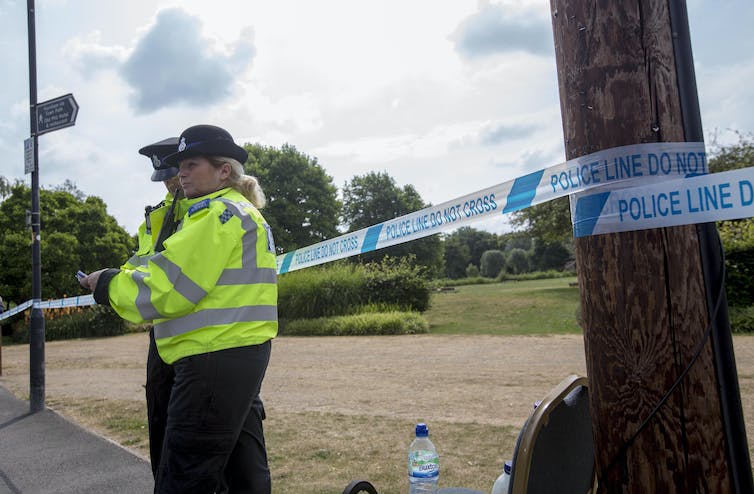 Queen Elizabeth Gardens in Salisbury remains closed and cordoned off as investigations continue into how Dawn Sturgess and Charlie Rowley were found unconscious in nearby Amesbury. EPA/Rick Findler

At the moment, the police are investigating a park close to Salisbury city centre, which the couple are suspected to have visited before becoming ill. It is possible that the container used in the attack on the Skripals was abandoned in the park and lay undisturbed until found by the couple four months later.

So should the British public be worried that there are containers of nerve agent loose in the English countryside? Probably not.

Read more: Explainer: what is VX nerve agent and how does it work?

This is a very rare agent, even by nerve agent standards, with only one country – Russia – having been suggested to have made it.

If the couple have been exposed to the residue of the material left over from the attack on Sergei Skripal, then once that container has been located, there will be no more danger from Novichok agents being found in the open in the UK.