Can you imagine walking 14,000km? Trekking across wide savannas, down creek beds, along mountain chains in terrain that is new and home to foreign types of plants and animals? Can I eat this? What is that? 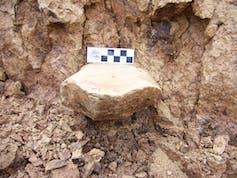 One of the 2 million-year-old stone tools discovered at Shangchen, China. Photograph courtesy of R. Dennell.

This long excursion – once thought only to have been attempted late in the journey of humankind – has been getting pushed further and further back in time thanks to advancing archaeological research.

Findings published in Nature today have extended the start of our worldwide trekking back to beyond 2.1 million years ago.

Previously, we knew that people were wandering around eastern Europe by 1.85 million years ago, as their bones and tools were discovered at a cave site called Dmanisi in Georgia. 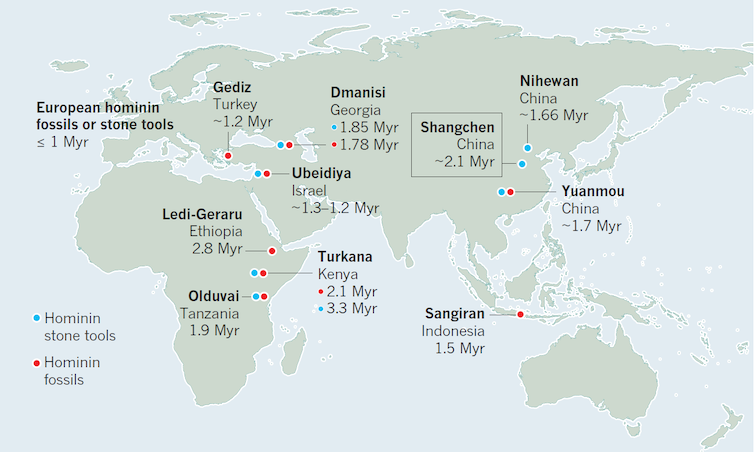 Presented in the new paper today, evidence for this earlier – and further – human movement comes in the form of flaked stone tools found in sediments at Shangchen, in the southern Chinese Loess Plateau.

Some 96 tools were found in situ – that is, still in the ground and undisturbed – and have shapes and traces of working recognisable to the archaeologist as distinctly human-made.

How are stone tools made? An expert explains.

Out of Africa? Or Asia?

Who were these early explorers? All signs point to hominids of the genus Homo (simply meaning “man”) – early people, some of whom led to our modern selves.

An onslaught of recent findings from Asia has prompted some researchers to suggest that humans came “Out of Asia”. However, while it appears that people were in this region very early, humanity remains an African invention.

Our earliest ancestors arose in Africa some 6 million years ago, although the earliest remains of those belonging to our branch of the family tree – that of Homo – only date back to 2.8 million years ago. A single jawbone found in Ethiopia pushed back the origins of our genus some 400,000 years.

Read more: Age of jawbones mean the origins of humans just got older

Currently, it seems that the earliest communities of Homo lived in eastern Africa for several hundred thousand years before heading out and away from the motherland.

The apparent ease with which humankind has moved across vast landscapes continues to surprise scientists. Many of us now struggle with a hike that our ancestors would consider a relaxing stroll down the road. So how far did they walk at any one time?

Realistically, we have no way of answering this question for sure. Modern hunter-gatherers such as the Hadza regularly travel some ten (or more) kilometres each day in the course of their daily activities. Applying this rate of movement, someone could theoretically reach the new Chinese site of Shangchen from Africa in about four years. 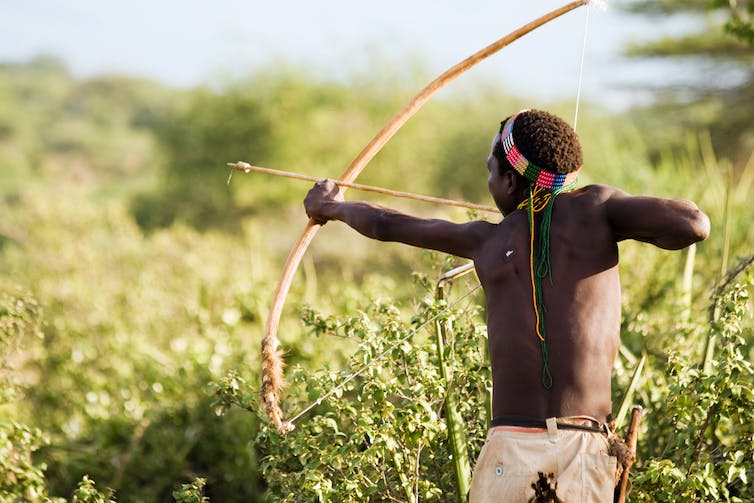 A Hadza hunter with bow-and-arrow in Tanzania, 2013. from www.shutterstock.com

In reality, the journey from Africa to Asia (and beyond) wasn’t one great trek undertaken by particularly adventurous individuals searching for… treasure? fame? glory? Instead, it is likely that small groups moved only a little at a time as their families expanded, or necessary resources ran dry.

One can imagine the family matriarch and/or patriach saying to their extended family, something along the lines of, “Let us go to the next valley (or the next river) where there are plenty of fish/deer and it isn’t so crowded.”

Perhaps on occasion there were a few irrepressible people who wanted to explore new lands and did cover significant distances in a single spurt. Perhaps they set up a new home far from their ancestors.

Certainly, such things have happened in recent times – Western Europeans turning up in Australia or North America, for example.

For the first humans moving out of Africa, there would not have been anyone to parlay with on arrival to new territories. Instead, they would have been entirely on their own when learning how to avoid new and exotic dangerous animals, identify and locate new foods and toolmaking supplies, and develop new ways to navigate. Each new landscape would have presented a significant challenge. Successfully setting up home or simply passing through without serious incident was no small feat.

Home on the Ocean. Colonisation of the Pacific and the last great human migration.

Humans are extremely flexible and adaptable to new environments. This trait has allowed a species that evolved in a hot grassy savanna to make its home in tropical rainforests, or the Arctic, or even on the ocean – as the Lapita people who colonised the Pacific did.

Ultimately, it allowed us to discover and colonise the entire globe as part of a multi-millenial human odyssey.