The next fortnight will be a real treat for stargazers - there are five planets to see in the evening sky, Mars is looking the best we’ve seen in 15 years, and on the morning of July 28 there will be a total lunar eclipse.

We are currently in the midst of a five-planet season due to Jupiter and Saturn being on the same side of the Sun.

Read more: Look up! Your guide to some of the best meteor showers for 2018

Look to the sky after sunset, and if you have a good view of both the eastern and western horizons you’ll see the planets stretched out in a line. Mars and Saturn will be rising in the east, Jupiter will sit high overhead, and bright Venus and faint Mercury will be setting in the west.

Over the next fortnight the Moon will visit each planet in turn, slowly changing from a crescent Moon near Mercury and Venus to a Full Moon near Mars. Museums Victoria/stellarium

Over the next few years there will be more moments when all five planets visible to the naked eye can be seen together. But eventually Jupiter and Saturn will drift apart and once that occurs it will be another decade before the five planets come together once more.

The Moon begins its tour of the planets on Sunday, July 15. It’ll be a thin crescent low in the western sky and is a great signpost for Mercury which will be just to the left of the Moon with bright Venus sitting above.

The following night the Moon will be near Venus (as shown in the image above). Then on July 19, the First Quarter Moon will sit below the bright star Spica.

On July 21, the gibbous Moon will have made its way to Jupiter and by July 25 it will meet up with Saturn.

The Full Moon completes the tour on July 27 when it joins Mars shining at its best and brightest.

Each month when we see the Full Moon, we are seeing the Moon “in opposition”. This means the Moon is directly opposite the Sun, rising as the Sun sets and setting as the Sun rises.

On July 27, not only is the Moon in opposition but Mars is too, and it’s a highly favourable one that brings Mars much closer to Earth than average. 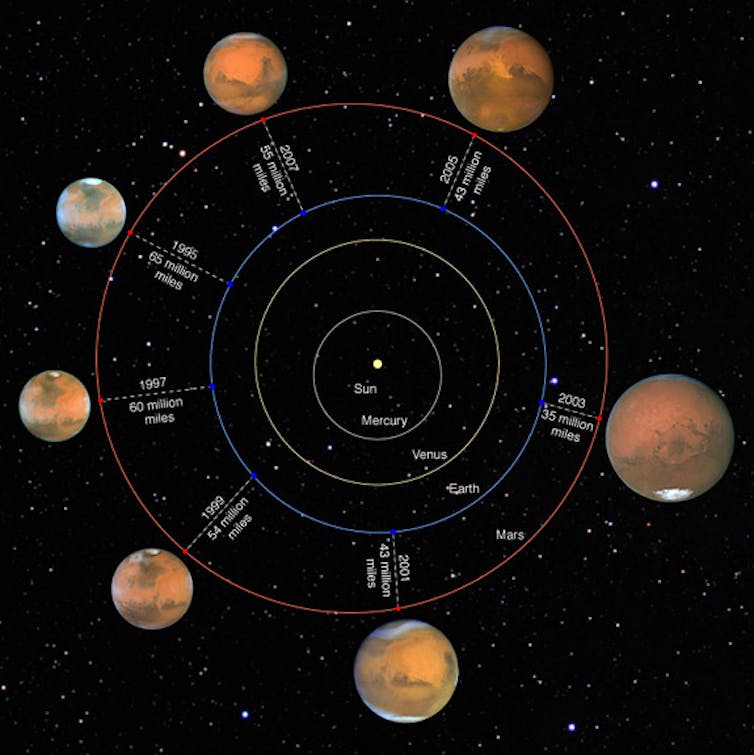 The upcoming opposition of Mars is reminiscent of the favourable 2003 opposition which brought Mars closer to Earth than it had been in 60,000 years. Zolt Levay (STScI)

Mars makes its closest approach to Earth on July 31 at a distance of 58 million km and its rapid increase in brightness over the past few weeks has been amazing to see.

Until early September, Mars will outshine Jupiter and become the third-brightest object in the night sky, behind the Moon and Venus (a graph of Mars’ brightness is here).

The reason that Mars can vary in brightness so much is because it’s our neighbour in space and it follows quite an elliptical orbit. Throughout 2017, Mars was fairly dull as it was on the opposite side of the Sun to Earth, and therefore at its most distant.

But even at each opposition the distance between Earth and Mars can vary by almost 50 million km, because of the two planets’ elliptical orbits. 2018 is definitely one of the best.

With Mars a striking red in the night sky, what else could be better than teaming up with a blood-red Moon.

When we look to the skies during the early hours of July 28, red Mars will be sitting just above and to the left of the eclipsed Moon.

Across Australia everyone will see the Moon enter Earth’s shadow at the exact same moment. In fact, everyone on the night side of Earth will see the eclipse together. 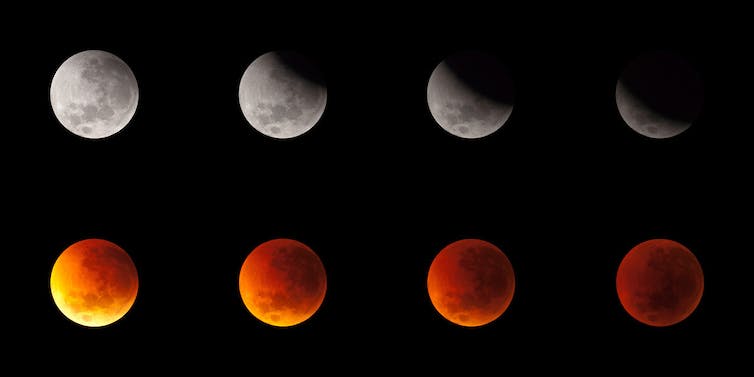 The July 28 eclipse will unfold in a similar way to this eclipse from June 16, 2011. Phil Hart

Western Australia will be the only state to catch the entire eclipse. It will begin with the Moon high in the northwest and end with the Moon low to the western horizon.

The exact time of Moonset depends on location, with the Moon setting (and the Sun rising) earlier at more northern latitudes. In Brisbane, Sydney and Canberra the Moon will set during totality while Darwin, Adelaide, Melbourne and Hobart will see the end of totality and the Moon will set while partially eclipsed. The advantage of seeing the eclipsed Moon low to the horizon is that the Moon illusion will come into play. Our brains will trick us into thinking that the Moon is larger than normal, which is why the rising and setting Moon can be particularly breathtaking. Lunar trifecta Lunar eclipses are generally slow and leisurely events, but this one tops them all by being the longest eclipse of the 21st century. Totality will last for 1 hour and 43 minutes, just 4 minutes short of the longest possible duration. Three things have come together to make this possible. First, and most importantly, this eclipse will see the Moon move through the centre of Earth’s shadow, making for a long and deep eclipse. 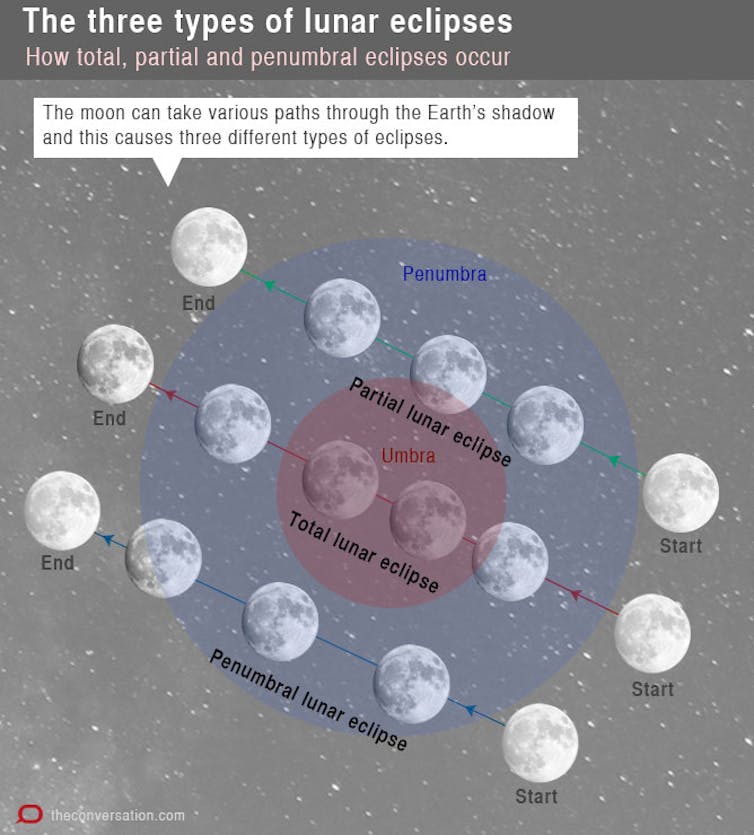 Second, the eclipse occurs during an “apogee” Moon, when the Moon is at its most distant from Earth. For those who remember Kepler’s Second Law, being at its most distant means that the Moon is moving at its slowest. Therefore, it will spend 5-10 minutes longer in Earth’s shadow compared with a perigee Moon, when the Moon is at its closest approach to Earth and moving more rapidly. Finally, an extra few minutes are picked up because this eclipse is occurring near aphelion, which is when Earth is furthest from the Sun and occurs in early July. 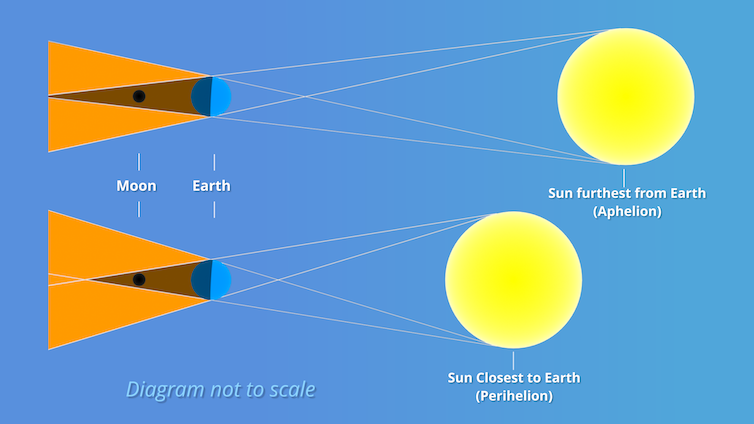 During aphelion when the Earth is furthest from the Sun the Earth’s umbral shadow lengthens and widens. Museums Victoria What’s interesting is that when Earth is furthest from the Sun, Earth’s “umbral shadow” lengthens and widens. Read more: Curious Kids: Does space go on forever? The umbra is the darkest part of Earth’s shadow and is the region the Moon must move through to make an eclipse (there are also penumbral eclipses, when the Moon passes only through the lighter, penumbral shadow, but it is almost impossible to make out any real change to the Moon’s brightness in this case). It’s completely safe to watch a lunar eclipse and no special equipment is needed to see it. This is our last chance to see a total lunar eclipse until May 2021, although we will catch a partial lunar eclipse next July. So get ready for some great planet-watching over the next fortnight, and remember to set your alarm early on July 28 to see the eclipse and catch a true natural wonder.