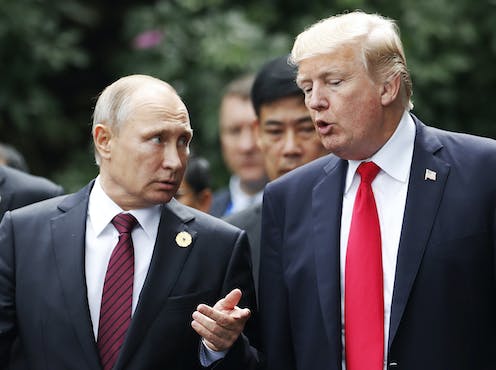 The US and Russian presidents are meeting in Finland for their first extensive one-on-one conversation. Does much hang on this meeting? In theory, a great deal. In practice, not so much.

That the meeting is taking place is cause for satisfaction, but this should be tempered by caution. This is not to understate the importance of the United States-Russian relationship. On the contrary, international stability and security greatly depend on how these two countries perceive each other and interact.

The US and Russian arsenals account for some 93% of the world’s nuclear weapons. No progress towards nuclear disarmament is possible without their active cooperation. At stake too is the future security of Europe and the prospect of resolving any of the destructive conflicts that have afflicted much of the Middle East and parts of Europe and Asia.

Read more: US approach to security is deeply troubling – and it's not just about Trump

But the sad fact is that, three decades after the fall of the Berlin Wall, the promise of a constructive relationship between the two former Cold War rivals has borne little or no fruit.

In April, Trump declared the relationship with Russia to be “worse now than it has ever been, and that includes the Cold War”, a sentiment widely echoed by Russian leaders and officials.

Why we cannot expect much from the meeting

Of the many obstacles in the way, the most glaring is Trump’s own worldview and approach to diplomacy.

In numerous speeches and tweets before and since his election, Trump has made no secret of his wish to initiate a dialogue with the leaders of countries that previous US administrations have either shunned or treated with suspicion and hostility.

However, Trump’s notion of dialogue rests largely on leaders developing the kind of personal chemistry that moves them to bargain and eventually strike a deal. For Trump, these deals should have a commercial dimension that helps “make America great again”.

By contrast, a coherent strategy must aim to establish a new framework that is sensitive to the concerns and grievances of both parties. It must address not only the military and economic but also cultural and psychological aspects of the relationship.

Importantly, such a strategy needs to recalibrate both NATO’s and Europe’s relations with Russia. It must also address the many intractable problems that have resulted in a succession of crises and endless bloodletting. In such conflicts as Syria, Iraq, Ukraine, Yemen and Afghanistan, to name a few, US-Russian consultation and coordination can make a difference. Trump has shown little interest in developing such a strategy.

The likely consequence is that any understanding reached at the summit will be limited in scope, open to contradictory interpretations by one side or the other, and difficult to implement, particularly on the American side where any hint of compromise will be widely viewed with deep mistrust.

Read more: The US, Russia and China: a twisted tale of personal ego, profound mistrust and foolish nationalism

Here lies the second, perhaps more troubling weakness in Trump’s negotiating position. His meeting with Putin comes at a time of rising anti-Russian sentiment in the US that now borders on hysteria. An important driving force has been Moscow’s alleged interference in the 2016 US presidential election. This has greatly preoccupied the FBI and other arms of the US intelligence community, at least since July 2016.

The allegations eventually led to the appointment of former FBI director Robert Mueller as special counsel to investigate possible collusion between Russia and the Trump campaign, and even possible obstruction of justice by the president himself.

In February 2018, Mueller indicted 13 Russian citizens and three Russian entities, notably the Internet Research Agency. On the eve of the Trump-Putin summit, he charged another 12 Russian military intelligence officers with computer attacks meant to undermine the Democratic Party. The political intent behind the timing of the indictment could not be more obvious.

Coupled with other congressional inquiries, some ongoing, talk of the “Russia threat” has reached frenzy levels. Powerful forces are at work.

The anti-Russian campaign, though pressed strenuously by Democrats traumatised by their 2016 election loss, has strong bipartisan support. For largely electoral reasons, many Republicans want to soften the campaign’s negative impact on the Trump presidency. Yet both houses of Congress voted overwhelmingly last July for a bill giving Congress the power to block any effort by the White House to weaken sanctions on Russia.

Added to this, some of the most senior members of Trump’s administration, including Defence Secretary Jim Mattis, Secretary of State Mike Pompeo and National Security Adviser John Bolton, have well-established hawkish credentials.

Then there is the influential role of the media and think-tanks, all of which have helped create in the US a visceral public antipathy to Russia, and to Putin in particular, that severely limits Trump’s room for manoeuvre.

Given these constraints, the idea that he might be able to conclude some Russo-American “grand bargain” is virtual fantasy. Here Trump’s actions since assuming office tell us more than his words. In March, the State Department announced the sale to Ukraine of anti-tank missiles, a step Russia considered highly provocative. In April, new sanctions were imposed against 24 Russians, striking at some of Putin’s closest allies, as punishment for Moscow’s alleged meddling in the 2016 election and other “malign activity”.

Most telling have been three key policy documents issued by the US administration: the National Security Strategy last December, soon followed by the 2018 National Defense Strategy and the 2018 Nuclear Posture Review. The message in all three is clear: countering Russia’s resurgence and China’s rise is now central to US policy.

To this end, the US military is being readied to confront its adversaries across the spectrum of conflicts, whether in Europe, the Indo-Pacific or the Middle East. Modernisation of both conventional and nuclear forces has become a high priority. Simply put, the three documents take us back to the Cold War mindset rather than to any notion of renewed dialogue with Russia.

Time for a rethink?

The problem with Trump, then, is not his wish for a more constructive exchange between the US and Russia. Rather, it is a political environment that is deeply hostile to such an enterprise, which is not to say Trump is himself blameless. His political alliances at home, his choice of senior lieutenants, his chaotic rhetoric and the glaring contradiction between his words and deeds are not exactly helpful.

Trump’s troubling inadequacies and the dangerous tendencies of the US security establishment should be enough to cause a serious policy rethink on the part of US allies, not least Australia. As Europeans are discovering, meekly echoing the policies and pronouncements emanating from Washington does little to serve the interests of allies.

While Australia is hardly a primary player when it comes to US-Russian tensions or the future of NATO, there is much we can do, not least in how we manage our relations with Russia. We could quite easily open up new channels of communication, engage in cooperative business, educational, cultural and sporting projects, and explore possibilities for multilateral engagement.

The question is whether the political class in Australia is capable of this kind of independent thinking and policy innovation. In the absence of political leadership, it may be time for civil society in Australia – as indeed in Europe, Canada, New Zealand and importantly in the United States – to play a more active role in the public sphere.

At a time when the public in many countries views the world as increasingly dangerous and looks to more effective forms of global governance, there is much that business as well as educational, professional, cultural and even religious groups can do to disseminate information, foster informed public debate and help develop new policy directions.