Two small pieces of seaweed found by a Chilean scientist on an Antarctic beach set in train research that may transform our understanding of ocean drift and reveal what the future holds for Antarctic ecosystems affected by climate change.

It all started in January 2017, when sharp-eyed marine biologist Erasmo Macaya spotted two clumps of southern bull kelp washed up on the tide line of an Antarctic beach.

Most of us would have walked right on by, but it stopped Macaya in his tracks. To him it was as if an alien had just landed – and in many ways that was exactly what had happened. 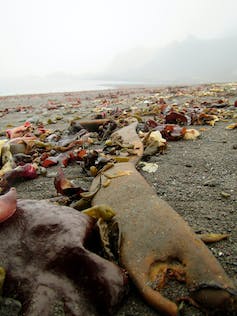 Every piece of science he knew said that this species of kelp should never have ended up in Antarctica. Its home was the regions around New Zealand, Chile and the sub-Antarctic islands. Indeed, a genetic test later confirmed that the pieces he found had travelled tens of thousands of kilometres from the Kerguelen and South Georgia islands.

So how did the kelp get to Antarctica?

Many scientists considered such a journey impossible, because of the fierce barrier of winds and currents that encircle Antarctica. These winds – known to sailors as the Roaring Forties – combine with the world’s strongest ocean current, the Antarctic Circumpolar Current, and the Coriolis force generated by Earth’s rotation.

Together, these forces push floating objects east and north, away from Antarctica. Before Macaya’s discovery, this barrier was thought to be impenetrable to floating debris. 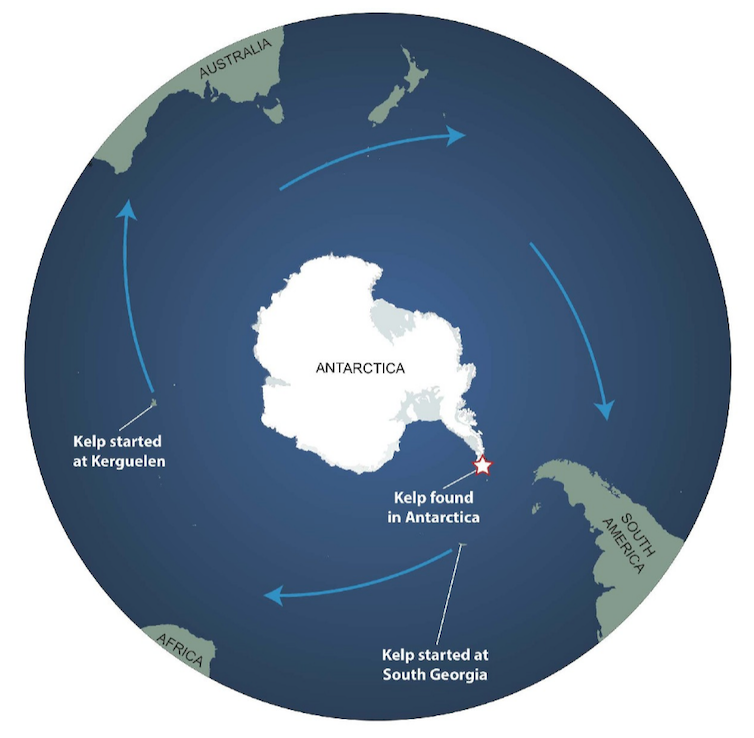 But if kelp and other organisms could make it to Antarctica, this would have profound consequences for Antarctic ecosystems. So was there a way for the kelp to drift through that barrier?

We took up the challenge, using our ocean models. The mystery deepened when our first modelling attempts suggested that the Southern Ocean was indeed uncrossable by floating kelp. Even ocean eddies – the “weather” of the ocean – were not able to push floating objects southward away from the main ocean currents.

Yet the kelp had undeniably made the crossing. This led us to think about other influences on ocean drift that could play a role. We decided to add a very small effect known as Stokes drift to our models.

You can think of Stokes drift as deep ocean surfing. Waves can push floating objects in unusual directions. In the kelp’s case, each time a wave passes, the kelp will move a short distance with the wave. This drift is slow when waves are small, but in regions with large waves (such as the Southern Ocean) it can be much faster.

During storms around Antarctica, waves are typically 10-15m high. The largest wave ever recorded in the Southern Hemisphere, more than 23m, was in the Southern Ocean off New Zealand. Stokes drift must be large here.

When we added this factor to our ocean models, the change was instant. The massive waves generated by Antarctic storms pushed a small proportion of floating objects southwards. As we report in Nature Climate Change today, this conceivably explains the kelp’s voyage to Antarctica.

We calculated that the kelp specimens must have drifted at least 20,000km to reach Antarctica – the longest biological rafting events ever recorded.

Our results will also change the way that drift pathways for floating objects – such as plastics, aeroplane crash debris, pumice from volcanoes, driftwood, seaweeds, and messages in bottles – will be calculated, particularly in stormy oceans.

What this means for Antarctica

The implications don’t stop there. Until now, Antarctica was thought to be an isolated ecosystem, largely insulated from environmental change. This is not in fact true.

Southern bull kelp can carry many other species of plants and animals when it detaches and floats out to sea. The discovery that this kelp can raft to Antarctica means we could see major ecological changes in Antarctic marine ecosystems as the climate warms.

So far there is almost no evidence of natural colonisations of Antarctica from northern regions in the past few tens of thousands of years. Many Antarctic plants and animals are distinct from those found on other continents and sub-Antarctic islands.

In fact, the kelp strands Macaya found are the first recorded foreign organisms to have drifted across the Southern Ocean. But our models suggest these are unlikely to be the only ones to have made the trip.

This means that Antarctica’s ecological differences are not really due to physical isolation. It is more likely that the harsh Antarctic climate prevents new plants and animals from establishing themselves.

But Antarctica is changing. Parts of the frozen continent are among the fastest-warming regions on Earth. As Antarctica and the ocean around it warms, the kelp rafts – and other floating organisms, including invertebrates hanging onto the kelp, seeds, driftwood that could harbour insects, and larvae – may one day be able to colonise.

By the end of this century, when parts of Antarctica are expected to be similar to current sub-Antarctic environments, we might see many new species colonising Antarctica, bringing dramatic ecosystem change.

Other human-caused influences may also be felt. If kelp can break through the barrier, then floating plastic debris from the large garbage patches in the South Atlantic and South Pacific, just north of the Southern Ocean, could conceivably make a similar journey.

Read more: The winners and losers of Antarctica’s great thaw

Plastic litter is still very rare in the waters around Antarctica. But with ever-growing amounts of plastic entering our oceans and the new drift pathways we have discovered, more plastic will likely find its way south to pollute one of our last near-pristine environments.

And all of this has been revealed through the discovery of two small pieces of kelp on a distant beach, and the application of a relatively insignificant piece of ocean physics. From these small beginnings we now know that one of the world’s last great wildernesses might not escape our influence.