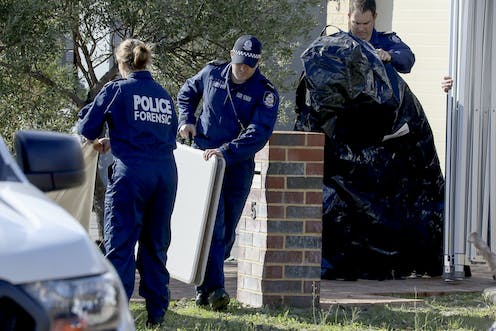 The recent killing of a young mother and two of her children in Western Australia, allegedly by the woman’s 19-year-old son, has attracted significant attention.

There is high public interest in parricide cases – not only do such incidents include homicide, but they are disturbing as they challenge assumptions about the family as a safe space, and upset conventional ideas about the sanctity and intimacy of the child-parent relationship.

Although cases of parricide attract substantial media and public attention, it is a relatively rare type of homicide. Drawing on national data from the Australian Institute of Criminology, here we present what is known about incidents of parricide occurring in Australia over the ten year period between 2002-03 and 2011-12.

The prevalence and nature of parricide in Australia

During this ten-year period, there were 128 parricide incidents, accounting for 12% of all family homicides. Most domestic homicides in Australia involve a single victim and offender. But in a small number of these parricides there were multiple victims and/or multiple perpetrators (12%).

During the period, parricide incidents involved 134 victims (constituting 12% of all domestic homicide victims during the same period) and 132 offenders. This included ten cases in which both parents of the offender were killed.

During the ten-year period males committed 54% of parricides in Australia. This is distinct from other forms of domestic homicide where males tend to predominate - for example, intimate partner homicides in which, during the same period, males accounted for 77% of offenders.

In contrast to intimate partner homicides, which typically involve a female victim, victims of parricide are more likely to be the perpetrator’s father (54%) than the mother (46%).

Known risks and points of intervention

While Australian state and territory governments have devoted significant resources to addressing family violence in recent years, this has been primarily directed towards intimate partner violence, which is the most prevalent form of family violence and specifically of fatal family violence.

Recent reviews such as the Victorian Royal Commission into Family Violence, Queensland’s Not Now, Not Ever Report, and the 2016 COAG Advisory Panel Report into Violence against Women and their Children do not refer specifically to parricide as a form of family violence. Little is understood in Australia or internationally about the known risks and opportunities for intervention prior to an act of parricide.

The need for evidence-driven prevention and responses

Three years ago, the killing of Adelaide Crows football coach Phil Walsh by his son brought substantial media attention to the issue of parricide. Again, in the past week this form of family violence has been a dominant story in the Australian media.

Read more: Victoria leads the way on family violence, but Canberra needs to lift its game

Victorian researchers, as well as academics working in other Australian states and territories, have begun to direct more attention to understanding the use of violence by adolescents within the home, and there is increasing attention to elder abuse in the context of family violence. But there is still little understanding of the patterns and characteristics of parricide.

Further research is needed in Australia to address the gaps in our understanding of parricide offences. Greater insight into the known risks prior to an act of parricide, and the circumstances immediately surrounding the use of lethal violence, can be harnessed to inform prevention and intervention strategies and services.