What can we possibly learn from the archaeological study of a World War I battle tank? Quite a lot, it turns out, when the attention is devoted to a rare German-built A7V Sturmpanzerwagen tank known as Mephisto.

The tank was originally collected as a war trophy by a Queensland based battalion in July 1918, brought to Brisbane the following year and now held by Queensland Museum. One hundred years to the month since its recovery, it is the last of its kind in the world.

Read more: We can't see the war for the memorials: balancing education and commemoration

On close inspection it is clear that this metallic monster is in far from pristine condition and covered in battle damage. Mephisto saw a lot of action during the battle for Villers-Bretonneux in northern France a century ago. 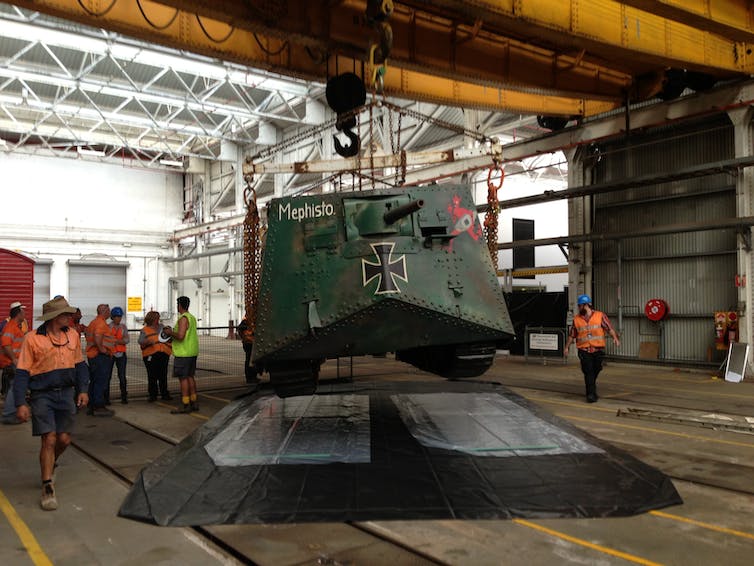 The story of the tank is now told in a new publication, Mephisto: Technology, War and Remembrance, that recounts its history and technological development, and places it in the context of the so-called “War to end all wars”. 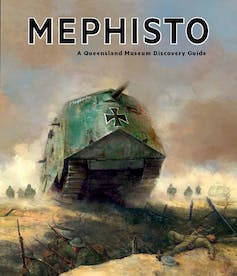 Together with our colleagues, we have attempted to reconstruct something of Mephisto’s role in its final battle.

To make sense of various gunshot and shrapnel impacts, the Queensland Police and Ballistic Bomb Blast Unit and the Defence Science & Technology Group (DSTG) provided their technical skills to help explain the damage to the tank.

It became clear that a large amount of small arms fire was thrown at the vehicle in an attempt to halt its advance. There is evidence of very close-quarter fighting, with several attempts to disable the vehicle.

The QP Ballistics team identified a .303 armour piercing round wedged in the armour next to a machine gun port. It seems that a soldier was attempting to disable one of Mephisto’s eight machine guns by shooting its water jacket. 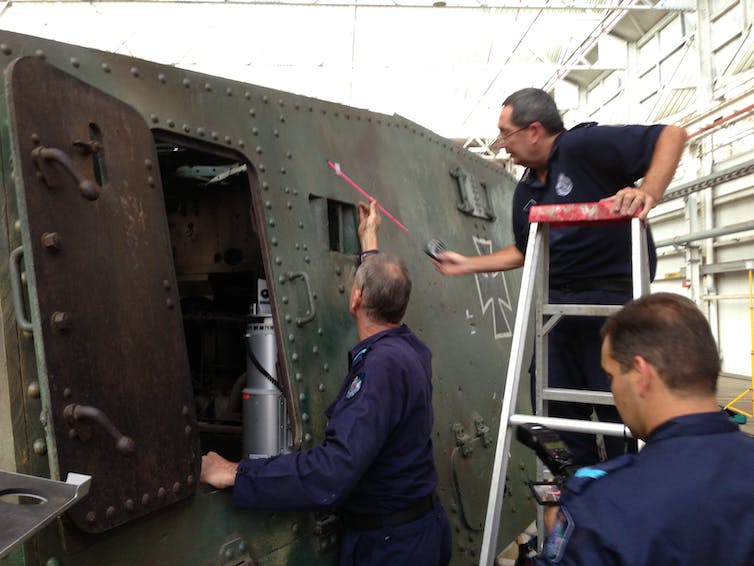 Queensland Police ballistics measuring the trajectory and angle of an armour piercing round fired at one of Mephisto’s eight maxim machine guns. Michael Westaway, Author provided

A series of well-aimed, short machine gun bursts were fired at one of the tank’s exhaust ports. Much of the damage occurred on the left side of the tank which from reconnaissance photos taken after the battle show the position of the allied trenches located parallel to the tank.

There is also evidence of a larger-calibre weapon that was brought into use against the tank, perhaps a French 37mm weapon, which simply ricocheted off Mephisto’s thick armour. 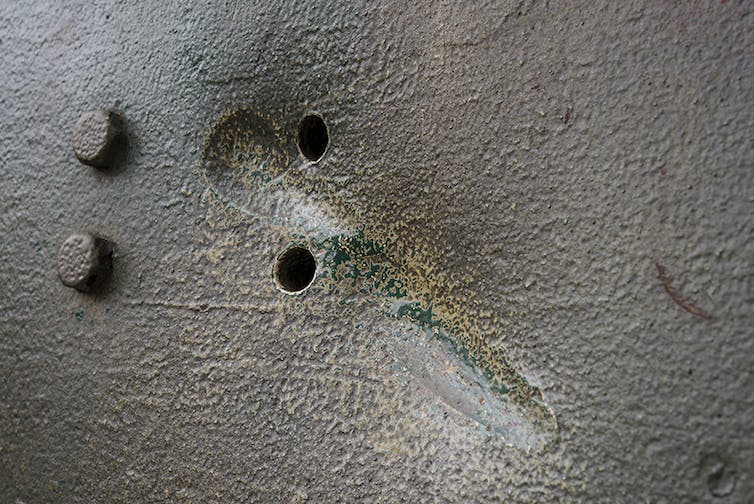 Further research is required to clarify the exact meaning of the use of this larger-calibre weapon. Initial work by DSTG has reconstructed the angle the tank rested in when it finally became stuck when it ran into a shell crater.

Close combat with a tank

Very close fighting was associated with the vehicle, and the battle damage reveals something of the terror that the defending English soldiers must have endured on the morning of April 24, 1918.

The destruction of the vehicle was revealed by QP bomb blast experts. Two different explosions were recorded in the twisted armour of the forward compartment of the tank.

Historical evidence has suggested that the German crew set off a charge to disable their vehicle, but the primary impact appears to have burst through the roof, the force bending the heavy steel support beams downward.

This blast created something of a chain reaction, and would have generated a temperature of between 3,000℃ and 4,000℃. It initiated a further explosion by igniting any munitions still within the tank.

The perfect impression of one of Mephisto’s own 57mm shells is blasted through the floor plating next to the main forward gun.

In turn, this projectile hit the ground beneath Mephisto, sending shrapnel back up through the plating on the underside of the tank. This generated several impacts in the metal directed back inside the forward compartment. 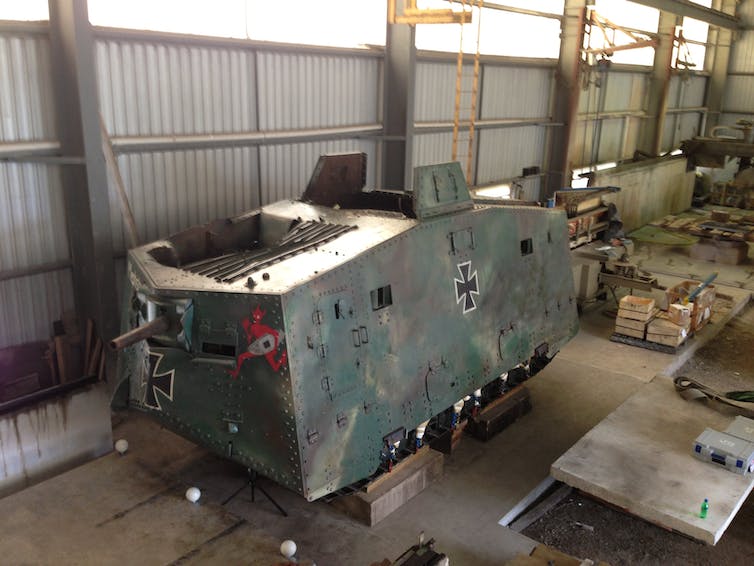 The damage to the forward compartment of Mephisto can be seen here, taken during the conservation treatment after the 2011 Brisbane floods. Michael Westaway, Author provided

The conclusion that can be drawn from this study is that a fusillade of small arms fire was hurled at Mephisto as it trundled, at speeds never more than 6–8mph (9-13kmh), towards the Allied positions at Villers-Bretonneux and Monument Wood.

As much of the damage is recorded on the left side of the tank it is probable that most of the impacts occurred during this final assault and not at its previous action at St Quentin. The tank sat for three months in No Man’s Land and continued to receive small arms and shrapnel damage while it was disabled.

A lasting legacy of war

A study such as this by no means rewrites our understanding of the conflict, but as the sole surviving A7V, this battered artefact does provide unique insights into the events that took place on the battlefields of Europe 100 years ago.

Investigating artefacts in this manner transforms them. They become something more than just a curious object from the past, and indeed can emerge as an important, silent witness to historic events.

A tangible object such as Mephisto, in trying to make sense of the battle damage to the vehicle, transcends the insights revealed in the pages of written history.

It highlights the horror of trench warfare and provides first-hand accounts of how the British infantry tried to stop an enemy tank.

Mephisto is a rare and important example of developing military technology in the early 20th century. As the last surviving German tank from the First World War it will once again be on display at Queensland Museum from November 11, 2018. 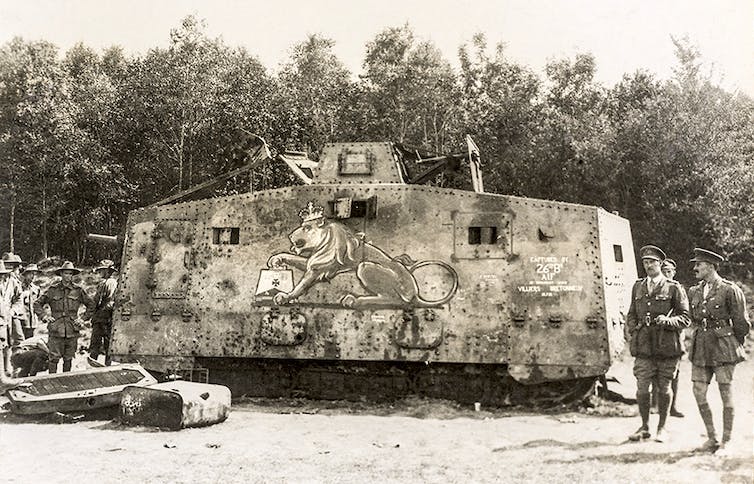