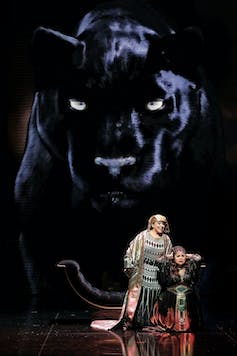 Elena Gabouri as Amneris and Amber Wagner as Aida in Opera Australia’s 2018 production of Aida at the Sydney Opera House. Prudence Upton

The production’s set consists of ten movable LED panels that provide digital background scenery ranging from a massive black panther to an ominous, blood-red sky. It has been positively received by critics so far, and Opera Australia reportedly plans to use this digital set-up for other upcoming productions.

Yet, while Aida may be a hi-tech departure from the set designs usually seen at Opera Australia, Terracini’s digital revolution is far from new. In 2012, Komische Oper Berlin (run by Australian Barrie Kosky) wowed audiences with its wholly digital set for Mozart’s The Magic Flute. A collaboration with London-based animation company 1927, the production features all encompassing digital environments and even digitised characters.

Through detailed choreography, the live performers also appear to interact with their digital surroundings. This example of what is called “full-synthesis,” sees Tamino fleeing from a digital dragon, the Queen of the Night spouting vengeance with the body of a digital spider, and Monostatos wrestling with unruly digital dogs.

In the same year, San Francisco Opera presented an “all-digital” production of The Magic Flute (2012), with a projected set that featured 1,200 pieces of digital media designed by ceramic artist Jun Kaneko.

Two years later, Cleveland Orchestra staged The Cunning Little Vixen (2014), in which live performers sang through head-sized windows in a projection screen while their bodies were superimposed with animated forest creatures.

Expand the field to include opera productions that have combined digital projections with physical sets, and the list of innovative productions grows even longer. Royal Opera House’s Don Giovanni (2014) had digital scenery that deteriorated with the title character’s mental state.

The Metropolitan Opera’s Das Rheingold (2010) had its Rhinemaidens emit digital bubbles in real-time. Dallas Opera’s Moby-Dick (2010) had the sailors of the Pequod perching inside digital longboats, to name just a few.

Even within Australia, there have been a number of recent productions that used entirely or partially digital sets. Victorian Opera’s The Flying Dutchman (2015), Four Saints in Three Acts (2016) and The Snow Queen (2017) all incorporated 3D stereoscopic scenery which required audience members to wear 3D glasses in order to see the full visual effect.

The Australian International Opera Company similarly commissioned digital backdrops for its touring productions of The Magic Flute and Turandot in China in 2016 and 2017.

The real difference between these productions is not the size of the opera company or even the kind of digital technology being used. Rather, it’s a question of how live performers are being integrated with the digital elements on stage.

Is the technology used to create background scenery, like a hi-tech version of traditional painted sets? Or is the production experimenting with the relationship between the live and the digital in a more innovative way?

Digital technology is seen as one possible solution for opera’s seeming lack of relevance and sustainability. In fact, the National Opera Review recommended that Australian companies use digital technology to innovate the art form, appeal to diverse audiences, and lower production costs.

However, using digital technology is more than a matter of mere spectacle or aesthetic but has huge implications for the very processes that make opera what it is. Depending on its scope, digital technology can have a major impact on creative hierarchies, rehearsal processes, and even the performer experience.

As soon as digital projections become more than background scenery, a production needs significantly more planning, more rehearsal time, and potentially more funding to bring everything together on stage. Meanwhile, as digital projections play a more prominent role, so too does the projection and/or video designer and/or animator within the creative hierarchy.

The biggest impact is often on the performer, who may be forced to adjust his or her behaviour on stage in order to make the technology “work.” Consider Barrie Kosky and 1927’s The Magic Flute. While the illusion of interactivity between the performers and the digital elements creates a spectacular effect for the audience, the illusion is only possible if the performers adhere to extremely restrictive choreography. As a result, these kinds of productions have been accused by some of turning live performers into “puppets” for the sake of digital technology.

Despite these obstacles, opera’s digital future is already well underway. The first step for opera companies is to join the party.