When would you call 000 for an ambulance? When a fall results in a nasty fracture? Concern that labour is progressing so rapidly that you’ll give birth before you can get to hospital? Weakness from prolonged vomiting and diarrhoea?

If you take a look at some Australian ambulance websites, none of these examples meet their definition of a “medical emergency” suitable for an ambulance response. But that doesn’t mean you shouldn’t call for an ambulance in these situations.

In 2016-17, Australian ambulance services attended 3.5 million incidents. These include cases categorised as urgent but not a “lights and sirens” response, as well as transport between hospitals and other health facilities. Only 1.1 million of the incidents, or approximately 37%, were classified as emergencies.

What happens when you call 000?

When someone calls the emergency number and asks for an ambulance, the call-taker typically takes the caller through a computer-based script. They attempt to define the health problem, and determine the response required: lights and sirens, or not.

Call-takers are not medically trained, but use a call screening program to identify the health problem. This system includes non-urgent categories such as “sick person”, which includes complaints such as an earache, sore throat and hiccups.

People may find it easiest to call 000 for a broad range of health problems, particularly after hours. But the deployment of paramedics for non-urgent health problems reduces their availability to respond to medical emergencies and major incidents.

Where are we going wrong?

Media campaigns have been used to educate the public about when it’s appropriate to call an ambulance. Strategies such as the Ambulance Victoria Ambulances are for Emergencies campaign includes stories of lives saved that may have been lost had ambulances been tied up with non-emergency calls.

Health promotion bodies have also highlighted the types of problems that should be considered health emergencies: chest pain, breathing difficulty, altered level of consciousness, sudden numbness, or paralysis of the face or limb.

But attempts to define a “health emergency” often fail to appreciate that the definition is dynamic and depends on context. A complaint of weakness associated with prolonged vomiting and diarrhoea may not be an emergency when you have family support and transport options. But it may be an emergency when the patient is an elderly person living alone without support. 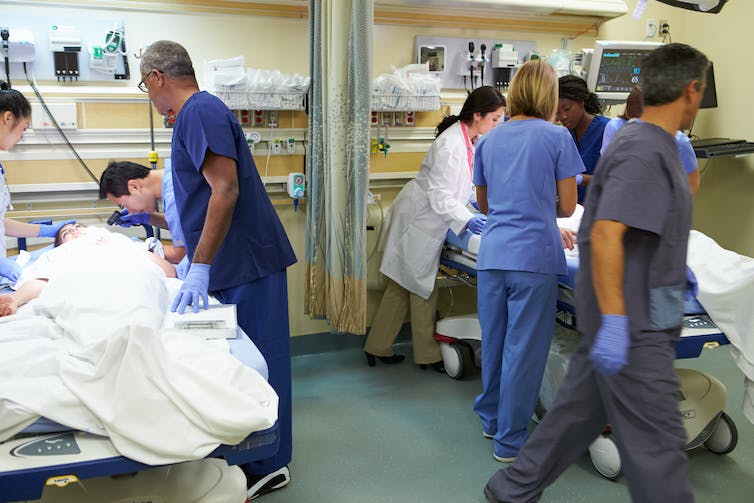 Patients who arrive at hospital by ambulance are likely to believe their condition is more serious than if they got there themselves. Shutterstock

There is also a difference between the patient’s perception of a health emergency and a health professional’s definition. This has been investigated by an Australian study that found patients cannot be expected to accurately evaluate the urgency of a health event. Social and emotional cues are often used to identify medical urgency. Understandably, people may be poorly placed to make rational, informed decisions about care options during a health crisis.

Research on ambulance use in Queensland aimed to understand why people use ambulance services for minor health problems. It found that people who arrived at an emergency department by ambulance had a higher self-reported perception of the seriousness or urgency of their problem than patients who self-presented to hospital emergency departments.

Read more: Why do we wait so long in hospital emergency departments and for elective surgery?

One possible explanation for these findings relates to health literacy. Poor health literacy affects the person’s ability to interpret health advice and navigate the health system to identify options for unscheduled care. Low levels of health literacy also limit the effectiveness of interventions that are designed to change behaviour.

Where can we improve?

Taking into account the difficulties of making crucial decisions during a crisis situation, there are a number strategies which may facilitate more effective use of ambulance resources.

One alternative approach is to use experienced clinicians to screen emergency calls and direct the caller to the most appropriate health pathway.

Several Australian ambulance services have introduced such a system, and the outcome of this screening process may be to dispatch an ambulance, or initiate a home visit by a doctor, nurse or paramedic trained to manage non-urgent health problems.

These systems have been shown to provide effective referral options for cases that don’t represent medical emergencies. Instead of discouraging people to call 000, they use call screening systems to identify emergency cases, which may include those not explicitly listed on ambulance service websites.

Read more: In the future your ambulance could be driverless

If you you’re confident navigating health information, you may find sites such as healthdirect useful. This service uses a web-based algorithm to question the user about the nature of the health problem to direct the patient to local health services based on the nature of the complaint. It also provides a national phone number to contact a registered nurse about your health problem.

But if you’re unsure whether an ambulance is required, it’s OK to call 000 for advice. After all, delaying a call for a serious health problem can lead to a catastrophic outcome.