Australian mathematician Akshay Venkatesh is one of four winners of the Fields Medal, announced overnight at the International Congress of Mathematics, in Brazil.

The 36-year-old now becomes only the second Australian to win a Fields Medal, described as the Nobel Prize for mathematics. The previous Australian winner was Terence Tao in 2006.

The medal is awarded every four years to researchers under 40 years old. It recognises their outstanding mathematical achievement for existing work and for the promise of future achievement.

Akshay’s medal is in recognition for “his synthesis of analytic number theory, homogeneous dynamics, topology and representation theory”.

Akshay Venkatesh is currently a professor of mathematics at Stanford University, in the United States, and will soon be moving to join the faculty at the Institute for Advanced Study at Princeton.

But he started out as a student at the University of Western Australia, studying physics and mathematics.

I was doing my undergraduate studies at the same time and he skipped first year mathematics and jumped straight into my second year classes. He was only 13 at the time, while the the rest of the students were 18 and 19 years old. It was clear that he was a very talented individual with exceptional abilities in mathematics.

He topped all his classes and I remember one assignment in third year where he managed to show that something that we had been asked to prove was, in fact, false. The lecturer had missed out an important condition that was required to make it work, but Akshay was the only one to spot it.

Another example of Akshay’s early interest in mathematics comes from one of his mentors at UWA, my colleague Professor Cheryl Praeger, an Australian Academy of Science Fellow. She said:

At our first meeting I was speaking with Akshay’s mother Svetha, while Akshay was sitting at a table in my office reading my blackboard which contained fragments from a supervision of one of my PhD students, just completed.

At Akshay’s request I explained what the problem was. He coped with quite a lot of detail and I found that he could easily grasp the essence of the research.

Initially Praeger was worried about the 16-year-old heading to Princeton in 1998, but he soon settled in and it allowed him to return to his love of number theory. 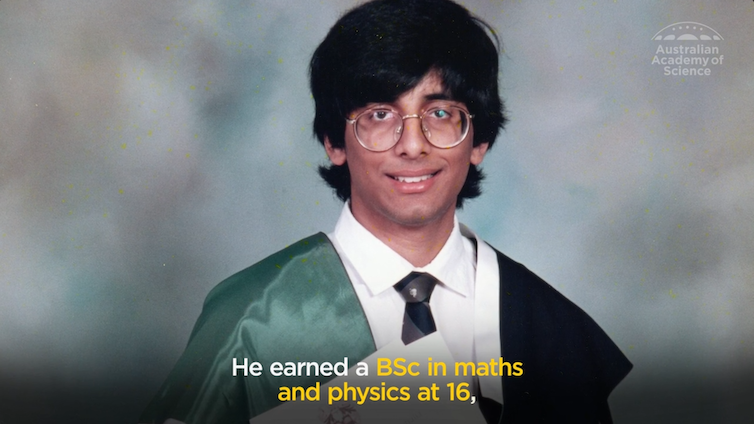 Akshay graduated at an early age from UWA before heading to Princeton to study for a PhD. Australian Academy of Science

A love of number theory

Number theory, Akshay’s main area of research, is one of the central areas of mathematics. It is notorious for having problems that are very easy to state but which turn out to be extremely difficult to solve.

One of Akshay’s major contributions has been to use ideas from many other areas of mathematics (such as representation theory, ergodic theory and topology) to help solve some of these very difficult problems.

One of the fundamental questions of number theory is to understand the distribution of the prime numbers – a prime number is one that is divisible only by 1 and itself, such as 2, 3, 5, 7, 11, 13 and so on. Mathematicians have been trying to understand these numbers since the ancient Greeks.

One of the main tools used in the study of prime numbers is what are called L-functions – the most famous of which is the Riemann zeta function introduced in the 1800s.

One of Akshay’s major results was joint work with the French mathematician Philippe Michel that solved the “subconvexity problem” for a large family of L-functions.

This problem had been identified in 1999 as one of the four most important problems in the area, and involved providing good upper bounds on the values that these functions can take. He was then apply to apply its solution to the study of homogeneous dynamics and the theory of quadratic forms. 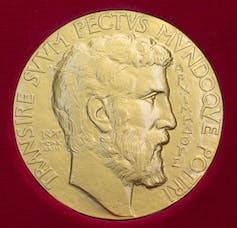 The Fields Medal, regarded as one of the most important honours in mathematics, is named after the Canadian mathematician John Charles Fields (1863–1932). He conceived the award to celebrate the great achievements in the area.

It is an incredible honour to receive a Fields Medal, which is made even more difficult by the fact that you need to be under 40 at the start of the year to receive it.

The award is great recognition for the significant work that Akshay has done and hopefully it inspires other students to study mathematics.

Read more: Universities can help recruit more science and maths teachers, but they can't do it alone

The Fields Medal is usually awarded to two to four mathematics. This year’s other winners are: