Drought-affected farmers in New South Wales have called for South Australia to increase the use of its desalination plant to enable an increase in water allocations for other users along the Murray River.

The farmers’ argument is that if Adelaide in particular draws less water from the river more will be available for agriculture in NSW and Victoria.

The logic may sound appealing, but there are three good reasons why it’s not a good idea. Not only is desalination an incredibly expensive project, there are other strategies – like water pricing – that can more effectively reduce water demand.

It’s also important to remember that the water flowing to South Australia is not “wasted” if it’s not diverted for industry. Stream flows are vital for keeping many ecosystems alive, and there are already serious concerns about current levels.

Adelaide doesn’t use that much water

First, Adelaide uses a very small amount of water from the River Murray. Over the past two decades, average diversions for metropolitan Adelaide and associated country areas have been just over 100 gigalitres (GL). This represents an average 1.25% of the water diversions in the Murray-Darling Basin.

SA in general (including irrigator use) has used an average 11% of water diversions over the past two decades. NSW has diverted 52% of surface water in the Murray-Darling Basin over the same period. Hence, the reality is that ramping up SA’s desal plant will have very little actual impact on NSW irrigators’ water allocations. 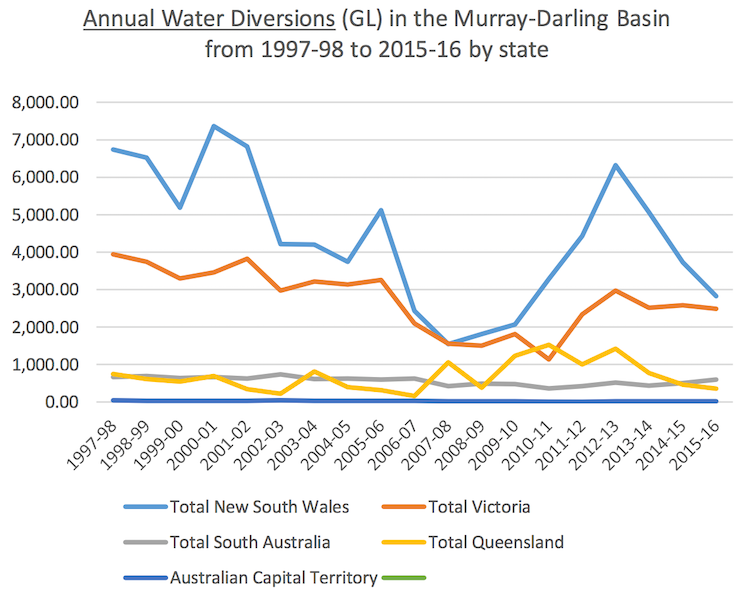 South Australia (the grey line) receives much less water from the Murray River than other states. MDBA Water Audit Monitoring reports, CC BY

Second, increasing desalination has heavy financial and environmental costs. The financial cost is why the plant has been run at only about 10% capacity (the minimum needed to maintain its working condition).

Previous economic analysis by consultants has suggested the desalination plant should only be used to increase water allocations to SA irrigators when temporary water market prices are above A$510 per megalitre (ML).

Given that temporary water prices are now trading around A$300/ML (albeit increasing due to increased water scarcity), we’re still a long way from a financial argument for turning to the desal plant, let alone considering the cost of its negative environmental impacts.

Third, we need to take into account the variable nature of Australia’s irrigation sector.

Farmers in NSW are complaining that they are on zero percentages of water allocations at the start of the water year (August 1). This sounds like a big problem. But it doesn’t mean the farmers will get no water from the river at all.

At the start of the season, water managers allot water in districts to irrigators every two weeks. Depending on the type of water entitlement owned, and given the current state of water conditions (e.g. storage, inflows, rainfall predictions), water managers will allocate a percentage of water to high security entitlements first, then general security, then low security. Only in high rainfall years will the low security group get any water. Most years they get none.

Since water was separated from land in the Murray-Darling Basin, this water is not tied to any particular use. Once allocated, irrigators can use their seasonal water for their crops, store it, sell it on the water market, or even choose to let it flow down the river.

It is not unusual for irrigators with low or general security entitlements to start the water year with low or no water allocated, especially in times of water scarcity. One reason is that these rights are traditionally associated with districts where farmers typically grow annual crops like rice and cotton. They have larger farms and more water rights – but also more flexibility about the amount they plant every year.

Low water allocations at the start of the water year act as a signal to these producers to think carefully about the amount of acreage to plant in the coming months. In addition, many NSW and Victorian farmers have access to carry-over water (unused stored water from the previous year).

The other option is the water market; irrigators can enter the water market to buy water. Current temporary water prices are still historically a lot lower than prices in the Millennium Drought, when temporary prices hit over A$1000/ML in many regions.

Finally, it is important to emphasise that water destined for urban use in SA is not “wasted water” for NSW and Victoria. It is still providing surface-water flows in the basin as it makes it way to SA.

Economic studies show that a healthy and sustainable river is worth millions of dollars in tourism and recreation, plus providing important cultural values, on which many small regional town economies are heavily dependent. And there is ongoing evidence that the Murray-Darling Basin is still far from being sustainable.

Read more: The Murray Darling Basin Plan is not delivering – there's no more time to waste

Unfortunately, many of the people who support more sustainable water reallocation for the environment are widely dispersed. They often do not have the lobbying power or the resources to engage successfully in policy debate.

Of course, farmers need support. But the calls for more water to be allocated to irrigators will sound loudly as the drought continues, and it’s important to remember that there are other, less costly, options that also protect our environment.