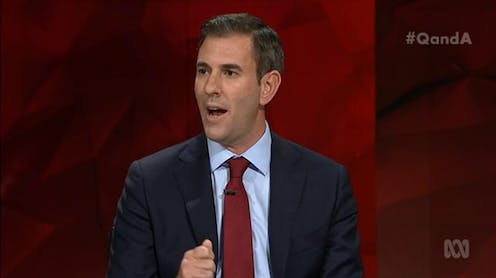 The Conversation fact-checks claims made on Q&A, broadcast Mondays on the ABC at 9.35pm. Thank you to everyone who sent us quotes for checking via Twitter using the hashtags #FactCheck and #QandA, on Facebook or by email.

The Conversation fact-checks claims made on Q&A, broadcast Mondays on the ABC at 9.35pm. Thank you to everyone who sent us quotes for checking via Twitter using the hashtags #FactCheck and #QandA, on Facebook or by email.

…we don’t hear enough about the fact under the current government we have had net debt double.

As the government and opposition seek to establish their economic credentials in the lead-up to the next federal election, we can expect to hear plenty about the relative performances of the Coalition and Labor Party with regard to government deficits and debt.

On Q&A, shadow minister for finance Jim Chalmers claimed that “under the current Government, we have had net debt double”.

In response to The Conversation’s request, a spokesperson for Chalmers provided the following sources:

So whether you look at the government’s Monthly Financial Statements or its budget, we’ve had net debt double under this government.

The Liberals used to bang on about a so-called “budget emergency” and a “debt and deficit disaster”, but you don’t hear a peep from them anymore.

Shadow minister for finance Jim Chalmers quoted his numbers (broadly) correctly when he said that “under the current government we have had net debt double”.

To put that in context, in Labor’s last term (2007-13, a period that included the Global Financial Crisis), net debt rose by about A$197 billion – around A$30 billion more than has been the case under the current Coalition government.

It’s worth remembering that over time, a government’s debt position will reflect deficits (or surpluses) of past governments.

Gross debt is the total amount of money a government owes to other parties. Net debt is gross debt, adjusted for some of the assets a government owns and earns interest on.

Not all government assets are included in the calculation of net debt. For example, the equity holdings of Australia’s sovereign wealth fund – the Future Fund – are excluded.

It’s worth noting that net debt doesn’t give the full picture of a government’s balance sheet.

If the government borrows A$1 (by issuing bonds) to buy A$1 worth of equity (investment in another asset), net debt will rise. That’s because bond issuance (debt) will rise by A$1, without an accompanying increase in investments that pay interest.

In Australia’s case, this distinction is relevant, because the government currently has about A$50 billion of investments in shares (which aren’t considered interest bearing for accounting purposes), and around A$50 billion in equity in public sector entities (like schools, hospitals and infrastructure).

Over time, a government’s debt position will reflect deficits of past governments, with budget deficits increasing the total debt, and surpluses reducing it.

Has net debt doubled under the current government?

As you can see from the chart, net debt has risen under both Coalition and Labor governments since 2008.

The Department of Finance publishes Australian Government Monthly Financial Statements, which can be used to get a picture of net debt levels during election months.

On July 1, 2007, in the final year of the Howard Coalition government, net debt was minus A$24.2 billion. The government’s financial asset such as those held in the Future Fund were greater than government bonds on issuance, putting the government in a net asset (positive) position.

The Liberal-National Coalition won the federal election held on September 7, 2013. At September 30, net debt was A$174.5 billion (meaning that net debt rose by about A$5 billion per month in the three months before the 2013 election).

As at July 1, 2018, the budget estimate of net debt in Australia was about A$341.0 billion. That’s roughly a 95% rise since the Coalition took office in 2013, making Chalmers’ statement about net debt having doubled under the current government broadly correct.

What can we take from this?

In terms of economic management, not a great deal.

It’s also worth noting that during Labor’s most recent period of government, net debt rose by around A$197 billion – about A$30 billion more than has been the case under the current Coalition government.

My own research on the effects of political parties in Australia on the economy found that, historically, economic growth and other important economic outcomes have had little to do with which party is in power. – Mark Crosby

The author has a done a very competent job in analysing Jim Chalmers’ statement regarding net debt under the current government.

What the analysis shows is how complex the issue is, and that the argument over which major party is the better economic manager cannot be encapsulated simply by one number.

The net debt figures can be interpreted in a number of different ways, pointing to different assessments of a particular government’s economic management.

As the author notes, the net debt position depends not just on the current government’s actions, but also on the legacy inherited from previous governments. That’s because debt is used to finance borrowings, which are largely the result of previous governments’ fiscal policies.

An assessment of a government’s macro-economic management depends on analysis of several different factors, of which debt is only one. –Phil Lewis