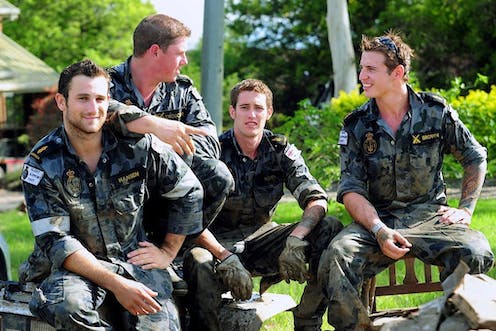 Some veterans say they find campus alienating, don’t feel they belong and fail to disclose their military status when they enrol, according to one of the first snapshots of Australian veterans’ experience of university.

While most veterans we surveyed were satisfied with their university experience, our research highlights what universities need to do to better, from admission to completion.

The transition to civilian life is often difficult for the 5500 or so military veterans discharged from the Australian Defence Force (ADF) each year.

As the defence budget climbs towards 2% of GDP, more young veterans will transition to civilian life.

The Australian Department of Education and Training collects no specific data on the number of veterans enrolled in higher education or their success, retention and outcomes.

Most were in their 30s or 40s, male and about one-third had a disability, impairment or long-term medical condition that may affect their studies.

Although many veterans earn both military and civilian qualifications from their military service, including diploma-level awards, few universities provide credit for these.

Veterans are not considered one of the six equity groups in Australian higher education. They typically receive no admission bonus points, special consideration, or recognition of prior learning for their service.

An exception is Queensland, where all universities agree to equate military service to an Australian Tertiary Admission Rank (ATAR). Under this system, different types/length of military service are given entrance ranks.

We also found that veterans were unlikely to: feel prepared for study; receive support from their institutions to settle into study; or see orientation activities as relevant and helpful.

Once enrolled, most student veterans surveyed felt positive about university life. 94% would recommend university to other veterans.

University is very challenging and gives you a huge sense of achievement when you finish. Also helps you move forward and realise that your military service doesn’t necessarily define you.

Veterans also identified strengths they brought to study. These included discipline, leadership and time management. These skills were perceived as central to academic success, particularly given student veterans are relatively likely to have family responsibilities and/or a disability.

The presence of student veterans on campus can also benefit other students. As one student noted:

… the skills and attributes developed in the ADF will make you very competitive at an academic institution. The values and life experience you bring will also benefit all around you.

Despite these strengths, many student veterans do not feel a sense of belonging on campus. Some of our respondents felt isolated, and many felt university culture was not respectful or appreciative of military service. Only one third of respondents disclosed their military status to their institution.

One fifth of respondents were not comfortable discussing their military experience at university. Nearly one third felt their university was not “veteran friendly”. One student advised:

(Try) not to get involved with political conversations as many students who haven’t served, and haven’t seen the world, hold very immature viewpoints and don’t understand how veterans think.

What can we do better?

Universities could recognise military service at admission. Institutions could work with tertiary admissions centres to equate service to ATAR levels, as agreed by the Queensland universities. This process alone would lead to a substantial increase in student numbers.

The Australian Student Veterans Association has chapters on several university campuses. Expanding those chapters and other support groups would provide valuable resources and peer networks. Better promotion of disability services, counselling and other services would also help.

Our research confirms that veterans often enter university with life experiences, strengths, and perspectives different from those of other students (and staff).

This diversity can create high social and academic value. A diverse student body can provide a stimulating and creative intellectual environment. As such, it has the potential to improve the university experience of all students.

Invest for the future

The US, UK and Canada all invest significant resources in supporting military veterans to access and succeed at university.

This investment has been shown to have financial benefits overseas. For instance, US veterans with bachelor degrees earn an average US$17,000 more each year than their non-veteran counterparts.

Similar benefits are likely in Australia given the typical financial advantage of graduates.

But more than a financial gain for individual veterans, access to and success at university for veterans is an equity issue.

The difficulties of transition to civilian life are well documented. By accepting more veterans, universities could assist this transition while simultaneously improving the learning experience of all students.

Higher education should be accessible to those who have served in the defence of the nation.