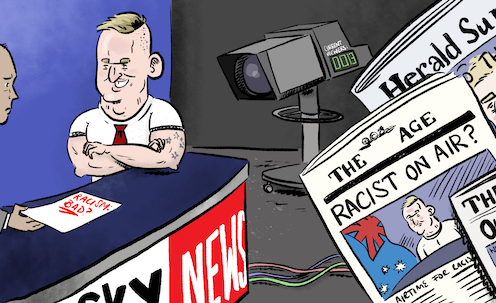 It has been quite a week for race-laden discourse in the Australian media.

There was Blair Cottrell, a notorious pro-Hitler extremist, appearing on Sky News and calling for a race-based immigration policy.

There was Andrew Bolt in the Herald Sun sounding the tocsin about how “there is no ‘us’ anymore”, how Australia was being overwhelmed by a “tidal wave of immigration” and ethnic “colonies”: Jews, Indians, Chinese, Muslims, Vietnamese, Cambodians, Italians.

A speech in London last month by Alan Tudge, Australia’s minister for citizenship and multiculturalism, resurfaced in which he said Australia was veering into ethnic separatism on the “European” model.

The outgoing racial discrimination commissioner, Tim Soutphommasane, used a farewell speech at the Whitlam Institute in Sydney to warn how this could become a self-fulfilling prophecy.

Reporting material that risks marginalising or stigmatising groups in the community on grounds of race presents the media with a difficult ethical dilemma, balancing free speech against harm.

Concerning Cottrell, the starting point is to recognise that hate speech and racism are his stock in trade. He is entitled to express his views, but the media are under no obligation to give him a platform to amplify them.

That Sky did so seems to have been a case of what Soutphommasane calls “the monetisation of racism”: that is, using racism as a way to attract interest, increasing ratings and adding advertising value to a program.

However, in this respect it backfired. American Express, Specsavers and the nappy-maker Huggies have suspended advertising on Sky in protest against Cottrell’s appearance. Yesterday, Victorian Transport Minister Jacinta Allan announced she had directed Melbourne’s Metro Trains to remove @skynewsaustralia from all station screens in the CBD.

A further dilemma for the rest of the media, including The Conversation, is that while these events are clearly a matter of public interest and therefore have to be ventilated, we play into the hands of Sky by giving it free publicity.

For an outfit like Sky – as with a fading celebrity – all publicity is good publicity, except if you get their name wrong.

Tudge presents a different problem. While the media are under no obligation to give the likes of Cottrell a platform, when the minister responsible for multiculturalism warns that Australia is veering into ethnic separatism, there is a clear duty to report it.

Tudge was not specific about what “separatist” group he was talking about, but from the context of his speech he seemed to be singling out Muslims, referring to sharia law and female genital mutilation. Inflammatory stuff.

It is a curious fact that while Australia’s immigration intake has increased, the minister responsible for citizenship and multicultural policy should be making inflammatory remarks about “ethnic separatism”.

As it happens, Tudge’s London speech came just three months after a debate in Britain over what was referred to as the “weaponising” of racism for political gain.

The debate was provoked by BBC Radio 4’s decision in April to mark the 50th anniversary of Enoch Powell’s infamous “Rivers of Blood” speech by broadcasting it in its entirety, read by an actor.

Powell was a Conservative MP who represented Wolverhampton, a Midlands city with a large population of West Indian and South Asian immigrants.

Speaking to Conservative Party members in Birmingham, Powell referred to an observation by one of his Wolverhampton constituents that “in 15 or 20 years’ time the black man will have the whip hand over the white man”.

Powell, who was a classics scholar, ended his speech with a passage from Virgil’s Aeneid, in which a sybil, or prophetess, warns Aeneas that Italy will be plunged into civil war, and she sees “the River Tiber foaming with much blood”. Recognising the toxic potential of this analogy, Conservatives leader Edward Heath sacked Powell from his shadow cabinet, effectively ending Powell’s political career.

No such fate seems likely to befall Alan Tudge.

However, on August 6, Soutphommasane sounded a warning of his own, referring explicitly to Tudge’s remarks.

“Race politics is back,” he said. “Right now, it feels like there has never been a more exciting time to be a dog-whistling politician or race-baiting commentator in Australia.

"Five years ago … I wouldn’t have expected that the biggest threats to racial harmony would come from within our parliaments and from sections of our media. Yet here we are.”

Soutphommasane said these developments had made some groups in society feel more vulnerable, sown division in the community and forced the targets of it into retreat. “Where the seeds of racism are planted in political speech, they bear bitter fruit in society.”

Soutphommasane did not confine his criticism to politicians. He accused sections of the media of responding to the financial pressures induced by the digital revolution by using racism as part of their business model.

“Faced with competition from a proliferation of news and entertainment sources, some media outlets are using racial controversies to grab attention – as a means of clinging on to their audiences.”

He referred specifically to Sky and Bolt.

In covering these stories, journalists have an ethical duty to minimise the risk of harm and act responsibly.

In straight news reportage, they can do this by seeking out and including alternatives to the racist perspective. This may provide at least some antidote to the poison.

They can also seek comment from communities targeted by racist discourse, thus giving them a voice and perhaps helping to mitigate any sense of isolation.

In commentaries, they can frame the article in a way that is explicitly or implicitly disapproving.

Reporting or commenting on racist discourse is one thing. Creating it is quite another.