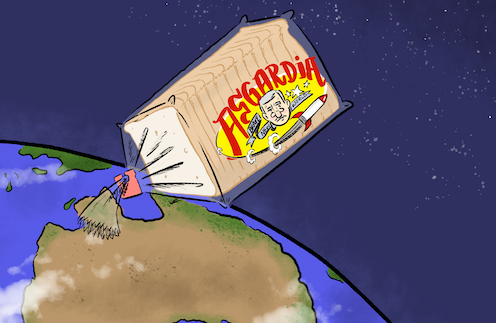 In June, a fledgling nation elected its first parliament. With more than 250,000 citizens, the new country’s population is bigger than that of Samoa. It boasts a flag, constitution and anthem. The catch? Asgardia, the first-ever “Space Kingdom”, is not a country on Earth. It’s based on a satellite currently in low Earth orbit.

Asgardia is the brain child of Igor Ashurbeyli, a Russian-Azerbaijani scientist and engineer. Ashurbeyli has long been fascinated with space, but it was his work with nanotechnology that earned him a UNESCO medal in 2016. He’s now the “head of nation” of Asgradia – first self-appointed, later confirmed by Asgardia’s “citizens” in an online vote.

Asgardia’s coat of arms bears the motto “One Humanity, One Unity”, and this is Ashurbeyli’s vision: a new nation, free of geographical divisions, with the “opportunity for infinite development”. Its official website maintains that Asgardia is already a country:

Asgardia is a fully fledged and independent nation, and a future member of the United Nations - with all the attributes this status entails: a government and embassies, a flag, a national anthem and insignia.

But under international law, it takes more than a government and flag to make a nation. Statehood is the essential foundation of the global political system – states are both the creators and subjects of international law.

There are four main criteria of statehood in customary international law, as reflected in the Montevideo Convention on the Rights and Duties of States – a permanent population, a defined territory, a government and the capacity to enter into relations with other states.

So how does Asgardia perform against these criteria?

Currently, the only territory Asgardia claims is “Asgardia-1”: a cube satellite about the size of a loaf of bread. It holds uploaded data from Asgardian citizens - mostly a mix of selfies, inspirational sayings and greetings.

One conception of territory came out of the Island of Palmas Arbitration, a territorial dispute in the 1920s between the Netherlands and the US over an island in what is now Indonesia. The decision by the Permanent Court of Arbitration in The Hague defined a territory as “a portion of the surface of the globe”. But how can this apply to Asgardia when the globe is thousands of kilometres away?

Read more: The US plan for a Space Force risks escalating a 'space arms race'

There is also a question of whether territory must be naturally formed. One notable man-made sovereignty claim has been made by the Principality of Sealand, a previously abandoned concrete anti-aircraft platform off the coast of England, which a fishing-magnate billionaire declared a new nation in the 1960s.

After a German man tried to claim citizenship in Sealand, a German court declared that a man-made platform could not form the territory of a purported new state. The court held that territory must be “Mother Earth” - an impossible qualifier in space.

This debate is also currently playing out on Earth in the context of China’s artificial islands in the South China Sea. However, even if territory can be artificially formed, it must at least be able to host the population of a state. And a cube-satellite clearly falls short.

Igor Ashurbeyli holding a news conference to discuss the founding of the new ‘space nation’.

According to international standards, there is no minimum population size for a country to qualify as a state. And at more than 250,000 citizens at last count, Asgardia has a bigger population than many existing countries.

The fact that these Asgardians are undoubtedly dual citizens with another Earth-based country is also no bar to statehood. But even though international law allows some of the population of a state to reside outside of that nation (as in many countries with large diasporas), there is no historical precedent for an entire population to reside permanently outside the so-called territory.

No Asgardians currently live on Asgardia-1, and none ever will.

Asgardia claims to have a government, although there has been some disagreement over the method of elections. For the purposes of statehood, international law is not concerned with how a government came to power. However, a government must be able to exercise effective control over its territory and population. Although Asgardia-1 itself may be controlled by the Asgardian government, Asgardian citizens most certainly are not.

Read more: Why 'Asgardia' is more likely to be a pie in the sky than a nation in space

Ashurbeyli has written to the governments of at least 32 countries, such as Colombia, Zimbabwe and Montenegro, to congratulate them on their own elections and, presumably, hope for diplomatic correspondence in return. So far, it seems no one has replied.

And while Ashurbeyli has announced his intention to apply for UN membership, it seems impossible that such membership would be granted. To do so, Asgardia would have to convince nine of the 15 Security Council members - including all five permanent members - and gain further approval from two-thirds of the General Assembly. Many self-governing regions on Earth have failed to do this, including Taiwan and Kosovo.

Read more: Sorry Elon Musk, but it's now clear that colonising Mars is unlikely – and a bad idea

There is little doubt that Asgardia, despite its claims, is not a “space kingdom” – at least, not according to the accepted criteria of statehood under international law. The real question here is not so much about Asgardia now, but the idea of statehood in space in the future. If technology develops to allow meaningful habitation of space, how will we assess the status of these populations?

If Tesla and SpaceX founder Elon Musk really does create a settlement on Mars, what will be its status? A brave new world of statehood might await us – but just not quite yet.