Prime Minister Malcolm Turnbull has done a backflip on his proposal to put the emission reduction target into legislation, in the face of rebel backbenchers threatening to cross the floor.

The new plan is for the energy target – a 26% reduction to carbon dioxide emissions for the electricity sector – to be set by an executive order of the minister. Such an order cannot be disallowed.

The stunning retreat emerged as the energy issue threatened to turn into a crisis for Turnbull’s leadership, and the government worked on measures to reduce power prices to meet the demands of Coalition dissidents.

Cabinet Minister Peter Dutton remained conspicuously silent on Friday in face of a report that conservatives in the Liberal party were urging him to challenge Malcolm Turnbull within weeks.

Read more: VIDEO: Michelle Grattan on the NEG showdown and a ray of parliamentary unity after Fraser Anning's racist speech

A report in Sydney’s Daily Telegraph injected leadership speculation into the centre of Turnbull’s already highly difficult battle to curb a backbench rebellion over the government’s National Energy Guarantee (NEG).

The government has consistently refused a demand from the Victorian Labor government that the target should be set by regulation not legislation.

Read more: Infographic: the National Energy Guarantee at a glance

The executive order would be accompanied by an Australian Competition and Consumer Commission report to parliament on the price impact of the target.

If Turnbull had gone ahead with legislation, and enough backbenchers had crossed the floor to defeat the bill, it would have amounted to an effective vote of no confidence in his leadership.

While some of the backbench rebels will be satisfied with the price package, it is not clear whether this will include Tony Abbott and his hardcore supporters, who want to bring Turnbull down and have smelled political blood.

On another front, Nationals leader and Deputy Prime Minister Michael McCormack is facing mounting criticism of his performance, as the Nationals federal council meets in Canberra at the weekend. The energy issue is likely to be front and centre there.

Despite his public silence, it is understood that Dutton on Friday privately told Turnbull that he was comfortable with the government’s energy policy.

The backbench critics have had two major areas of concern. They did not think the NEG plan did enough to reduce electricity prices. And they were unhappy with the 26% target for reducing emissions in the electricity sector being legislated.

But the retreat from the target being enshrined in legislation will not be enough to satisfy those who want Australia to walk away from the target altogether and pull out of the Paris climate agreement.

Up to 10 backbenchers had threatened to cross the floor on the emissions reduction legislation.

The report about Dutton followed his interview with Ray Hadley on 2GB on Thursday in which Hadley challenged him over whether he was “blindly loyal” to Turnbull.

Dutton said he gave his views privately as a cabinet member and wasn’t going to bag out his colleagues or the Prime Minister publicly. 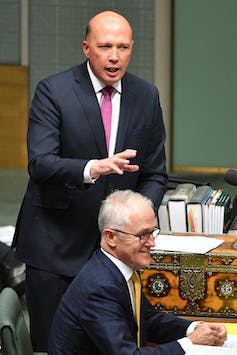 “If my position changes – that is, it gets to a point where I can’t accept what the government’s proposing or I don’t agree – then the Westminster system is very clear: you resign your commission,” he told Hadley.

The Telegraph report said Dutton was being urged to challenge Turnbull “on a policy platform of lower immigration levels and a new energy policy focusing on cheaper bills rather than lowering emissions.” Conservative MPs had told the Telegraph “a ‘torn’ Mr Dutton was considering his options,” the report said.

Asked on Nine whether Dutton was going to have a crack at the leadership, Defence Industry Minister Christopher Pyne said “absolutely not.”

Pyne also rejected the suggestion the government was on the ropes. In an obvious reference to Abbott and his supporters, Pyne said: “The polls are about 50-50 and there’s a lot of hyperventilating going on, and there’s a few people I think who are trying to put the band back together from the late 2000s, noughties.”

Finance minister Mathias Cormann said he had not heard any talk of some conservatives urging Dutton to challenge.

Cormann, a fellow conservative who is close to Dutton and said they had had four walks this week at 5.30 am, told Sky,: “We are both very committed to the success of the Turnbull Government and to winning the next election.

"We strongly support the Turnbull leadership of course and we want to see the Coalition government successfully re-elected early next year when the election is due.”

Read more: The National Energy Guarantee is a flagship policy. So why hasn't the modelling been made public?

The prices package would be based on recommendations made in the recent report of the Australian Competition and Consumer Commission.

The government has been briefing that Turnbull is willing to take a “big stick” to companies to ensure consumers get better deals.

The government is looking at cracking down on how companies bid into the wholesale electricity market and secret contracts between different players.

There would be closer scrutiny of energy companies buying and selling electricity internally between their own generation and retail companies at inflated prices.

This would put the contracts of “gentailers” under attention to ensure transfer prices did not disadvantage consumers. The ACCC said high transfer prices “raise concerns about the potential for substantial profit to be allocated to the wholesale businesses.”

The ACCC has also urged more transparency on direct contracts between retailers and individual generators, proposing these be put on a public register.

Among other changes being discusssed are: