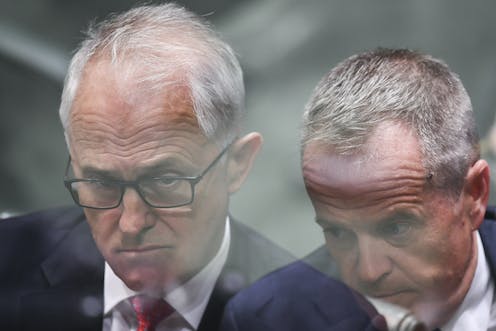 46% approved of Malcolm Turnbull (down nine), and 48% disapproved (up ten), for a net approval of -2, down 19 points since July. This is Turnbull’s first negative net approval in Ipsos since December 2017; Ipsos gives him better ratings than other pollsters. Bill Shorten’s net approval was -11, up five points. Turnbull led Shorten by 48-36 as better PM, a big decline from a 57-30 lead in July.

By 47-44, voters supported cutting the company tax rate from 30% to 25% over the next ten years (49-40 in April). In an additional question from last week’s Newspoll, voters thought the Senate should block, rather than pass, the tax cuts for companies with a turnover over $50 million by a 51-36 margin.

In last week’s article, I referred to divisions within the Coalition over the NEG and the company tax cuts as an explanation for Turnbull’s Newspoll ratings slump. Since then, those divisions have became much worse.

In an attempt to fend off a potential challenge from Home Affairs Minister Peter Dutton, Turnbull on Monday abandoned the emissions target part of the NEG, in effect yielding to the 13% who say the government is doing too much on climate change.

This 13% of all voters is greatly over-represented within the parliamentary Coalition and among right-wing media commentators. By reserving their right to cross the floor on the NEG, some Coalition MPs have shown how out of touch they are with the electorate on climate change. This probably also contributed to the swing in this Ipsos poll.

Despite Turnbull’s current woes, I think it would be a mistake for the Liberals to replace him with Dutton. While Dutton would appeal to One Nation voters who have left the Coalition over dissatisfaction with Turnbull’s perceived moderation, more moderate Coalition voters would likely desert. About 60% of One Nation preferences will probably return to the Coalition, but if moderates leave, Labor is likely to benefit directly from the Coalition’s lost primary support.

Only three weeks ago, just before and immediately after the July 28 Super Saturday byelections, the Coalition and Turnbull had some of their best polling this term. Ipsos is more volatile than other pollsters, and it was taken at a time of great division within the Coalition. Now that Turnbull has dumped the emissions targets, the internal divisions may subside, and the Coalition’s polling could improve.

On August 15, the ABS reported that wages grew at a 0.6% rate in the June quarter. Continued slow wage growth is likely to be a crucial issue at the next election.

Fieldwork for the two polls below was taken before last week’s parliamentary sitting.

This poll represents a 4% swing to Labor in Queensland since the 2016 election, and such a swing would probably result in Labor gaining many seats. According to The Poll Bludger’s BludgerTrack, eight LNP Queensland seats are held by less than 4%, including Dutton’s Dickson (a 2.0% margin).

There was no One Nation candidate in Dickson in 2016, when Dutton suffered a 5.1% swing against. A redistribution slightly increased Dutton’s margin from 1.6% to the current 2.0%. If Dutton becomes PM, he will probably receive an extra personal vote boost in Dickson, which could enable him to hold it. Otherwise, Dutton is vulnerable to the Queensland-wide swing in this Galaxy poll.

Last week’s national Essential poll, conducted August 9-12 from a sample of 1,032, gave Labor a 52-48 lead, a one-point gain for Labor since three weeks ago. Primary votes were 39% Coalition (down two), 37% Labor (up one), 10% Greens (steady) and 6% One Nation (steady). Essential’s two party estimate uses 2016 election preference flows and it would probably be 51-49 using Newspoll’s new method.

By 54-25, voters thought the current drought across eastern Australia is likely to be linked to climate change.

88% approved of drought relief for agriculture, 76% of subsidies for renewable energy and 73% of the private health insurance rebate. Just 33% approved of the fuel rebate for the mining industry and 36% approved of negative gearing.

In the context of large Internet company bans on alt-right speakers, 48% thought that an individual’s right to free speech does not mean these companies need to provide a platform, while 32% thought these companies should allow such people to speak even if they disagree with the speaker.

Electoral system not to blame for Fraser Anning

There has been much controversy following Queensland Senator Fraser Anning’s speech to the Senate on August 14. There have been suggestions the electoral system is at fault as Anning won just 19 personal votes at the 2016 double dissolution election.

Anning was the third candidate on One Nation’s Queensland Senate ticket. One Nation won 1.19 quotas, electing Pauline Hanson immediately. They then performed very well on preferences from populist parties, earning a second seat for Malcolm Roberts, who had just 77 personal votes.

In October 2017, the High Court disqualified Roberts over the citizenship fiasco, and Anning was elected to replace him.

Other than in Tasmania and the ACT, whose state electoral systems encourage below the line voting in the Senate, over 90% of Senate votes at the 2016 election were above the line ticket votes, according to analyst Kevin Bonham. In most cases, the number of personal below the line votes received by a candidate is irrelevant to the electoral process.