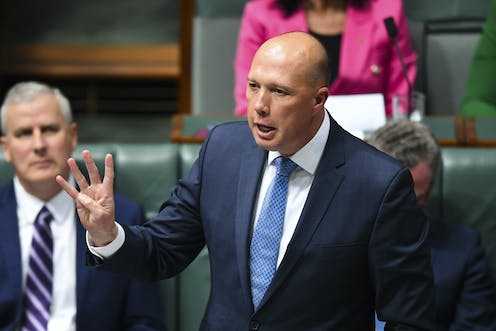 Section 44 of the Constitution has struck down many a politician in the past year – but is it powerful enough to take down the Minister for Home Affairs, Peter Dutton? This time it is not dual citizenship under s44(i) that is at issue. Instead, it is the more obscure s44(v) in the spotlight.

Section 44(v) says that any person who “has any direct or indirect pecuniary interest in any agreement with the Public Service of the Commonwealth” is disqualified from sitting as a member of parliament.

Last year, in a case concerning Family First senator Bob Day, a majority of the High Court held that the beneficiary of a trust which, via its trustee, is party to an agreement to which section 44(v) refers, has an indirect pecuniary interest in the agreement, and is therefore disqualified from sitting in parliament. If the facts set out above are correct, this would place Dutton into the realm of potential disqualification.

Exceptions for certain types of agreements

The key qualification is the reference to “an agreement to which section 44(v) refers”. Not every agreement with the public service will trigger the application of section 44(v). This is because otherwise ordinary agreements that everyone engages in, such as paying for a passport or a stamp, could cause disqualification from parliament.

In the Day case, Chief Justice Kiefel and Justices Bell and Edelman said there can be “no relevant interest if the agreement in question is one ordinarily made between government and a citizen”. But does an agreement between a childcare centre and the public service fall into that category? It is less ordinary than the purchase of a passport or a stamp.

Justices Gageler and Keane took the view that section 44(v) has no application to agreements entered into by the Commonwealth in the execution of a law of general application enacted by the parliament. As the provision of the childcare subsidy comes under a law of general application, which applies equally to all childcare centres, Dutton would not, on this basis, be disqualified from parliament. But two judges do not make a majority of the Court.

Read more: Explainer: what is the challenge to Bob Day's Senate seat all about?

Two other judges, Justices Nettle and Gordon, rejected the attempt to exclude agreements authorised by statutes of general application. In their view, the issue was whether the direct or indirect pecuniary interest in an agreement could conceivably influence a parliamentarian to prefer their private interests over their public duty.

A similar view was taken by the other three judges, Chief Justice Kiefel and Justices Bell and Edelman, who considered that one of the purposes of s44(v) was to ensure that parliamentarians do not seek to benefit from agreements with the public service or “put themselves in a position where their duty to the people they represent and their personal interests may conflict”.

In the case of Dutton, there is no suggestion of any attempt to use political influence or that the arrangements with the two childcare centres are any different from those applying elsewhere. It is therefore different from the Day case, where Day had asked the government to move his electorate office to a particular building, giving rise to an indirect pecuniary interest in the rent.

But it is still possible to argue that Dutton may benefit financially from these agreements with the public service. Is this enough to establish the kind of potential conflict of interest – where a person might prefer their private interests over their public duty – that concerned the High Court in the Day case?

Read more: The High Court sticks to the letter of the law on the 'citizenship seven'

This is a matter of judgment for the High Court. It would depend on how strictly it chose to apply the provision. But we do know from recent experience that the High Court has been particularly strict in applying section 44. So even though this case falls within the grey border-area of section 44, it is enough to raise a substantial concern that disqualification has occurred.

What are the consequences of disqualification?

Disqualification is not just an issue prior to election. It can arise at any time within a member’s term in parliament. Section 45 of the Constitution says that upon a senator or member of the House of Representatives becoming subject to a disqualifying disability in section 44, “his place shall thereupon become vacant”. This means that disqualification is automatic at the moment that a disqualifying agreement with the public service is made.

Let’s assume for a moment that an agreement that triggered the application of section 44(v) came into effect from July 2, 2018. That would mean Dutton’s seat was automatically vacated at that time (although to be sure this had happened, a Court judgment would be needed).

Section 64 of the Constitution also states that no minister shall hold office for longer than three months unless he or she becomes a senator or a member of the House of Representatives. That means Dutton could remain validly a minister for three months from July 2. After that, if he was still not a valid member of parliament, he would cease to be a minister.

This would have consequences for the validity of any decision he made as a minister from that point on. It also raises another difficult question in whether or not the “de facto officer” doctrine would apply to support the effectiveness of those decisions.

Given that as Minister for Home Affairs and Minister for Immigration and Border Protection, Dutton makes many decisions that affect the lives of many people, his possible disqualification from parliament opens up a Pandora’s Box of litigation possibilities.

How to fix the problem?

First, the matter could be referred by the House of Representatives to the High Court, as the Court of Disputed Returns, to determine, as occurred in relation to Barnaby Joyce. The benefit of doing so would be to clarify whether such interests give rise to disqualification. But the disadvantage is that it would take some time to get a judgment, leading to ongoing uncertainty.

Second, Dutton could terminate his indirect pecuniary interest in the agreement, resign his seat and be re-elected in a byelection. This would resolve the matter more quickly, but it is unlikely that the government would wish to hold such a by-election at this time.

Third, Dutton could terminate his indirect pecuniary interest, and an election could be called later this year. This would avoid or reduce any period in which he was performing the duties of a minister while possibly invalidly holding that office.

Fourth, Dutton could resign as a minister once the three months expires, so that there are no issues of validity concerning his ministerial decisions, but remain in parliament as long as the House decided not to refer him.

Read more: If High Court decides against ministers with dual citizenship, could their decisions in office be challenged?

Finally, the government could ignore the problem and tough it out, by not acting until an election was held next year, but risk a tsunami of litigation challenging the minister’s decisions.

None of these options is likely to be particularly palatable to the government, but nothing about section 44 has given the government great joy. However, it is another salient reminder of the importance of taking care to obey the terms of the Constitution.

All MPs with family trusts need to be as vigilant about the agreements entered into by the trustee on behalf of those trusts as they should be about their citizenship status.