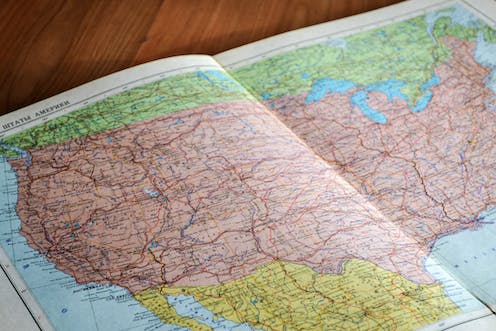 President Trump is challenging the US states' right to set their own emissions targets.Photo by John-Mark Smith on Unsplash

The Trump administration’s withdrawal from the Paris climate agreement was greeted with dismay around the world. Less well known, but probably just as damaging to emissions reductions, was freezing standards for carbon...

The Trump administration’s withdrawal from the Paris climate agreement was greeted with dismay around the world. Less well known, but probably just as damaging to emissions reductions, was freezing standards for carbon dioxide emissions from cars in July.

Read more: Why Trump's decision to leave Paris accord hurts the US and the world

The erosion of US federal climate policy has made action from individual states far more important. As Australia grapples with yet another failure to implement a national emissions policy, what can we learn from America?

And is it time for Australian states to reach out directly to like-minded states in other parts of the world to tackle global climate issues?

From the outside, the US often looks like a bastion of climate change denial and very large cars, but a group of US states has nevertheless made some of the most dramatic progress in curbing emissions of any jurisdictions in the world.

Consider New Jersey. In 1998, while the Kyoto Protocol was being negotiated (and ultimately rejected by George W. Bush), Governor Christine Whitman ordered that the state pursue an emissions target of 3.5% below 1990 levels by 2005.

California’s regulation of air quality goes back even further. In response to Los Angeles’ smog problem – arising from a confluence of geographical conditions, warm weather, and high automobile use – Sacramento introduced smog restrictions on automobiles in 1960. This predated both the establishment of the US Environmental Protection Agency and any meaningful federal effort to regulate air quality or car pollution. In 1970, when President Nixon established the EPA and Congress gave teeth to the Clean Air Act, California was granted special waivers to adopt stricter anti-smog measures. The state has done so ever since.

Under Governor Arnold Schwarzenegger, and as part of a much broader climate change initiative, reduction targets for CO₂ emissions from automobiles were added to the existing anti-smog rules. By this time, a number of states were also following California’s more stringent standards. These included states bordering California where auto dealers wished to sell California-compliant cars, but also East Coast progressive states pursuing ambitious climate change plans of their own.

Australia is not in exactly the same position as the the US – for example, we are virtually unique in the developed world for having no fuel efficiency standards for cars – but there are some striking similarities.

Read more: Emissions standards on cars will save Australians billions of dollars, and help meet our climate targets

The policy deadlock at the federal level has made action from states, and even local councils, vitally important.

At the same time as the federal government is struggling to put emissions reduction on the national agenda, Victoria has made a huge commitment to rooftop solar. South Australia, which leads the country in renewable energy generation, is now a net energy exporter for the first time.

While the Queensland state government grapples over the Adani coal mine, a May report found that billions of dollars in renewable energy projects are underway.

The Trump administration is widely expected to repeal many Obama-era limits on pollution. Auto emissions standards came onto the chopping-block in July, when the administration unveiled its plan to “Make Cars Great Again” by freezing fuel efficiency standards at 37 miles per gallon.

The EPA has also announced that it will revoke California’s waiver to set more stringent standards, which 13 other states including New York now also follow.

In both cases, the Trump administration is seeking not just to relax federal climate standards, but to prevent states from setting more stringent policies should they wish to. And in both cases, these matters will be settled by the courts.

Why this matters globally

These legal fights have global ramifications. The 13 states that follow California’s waiver have a population of 130 million. These states have pledged, through auto emissions standards and clean energy targets, to meet the Paris Climate goals – using their own policy autonomy to circumvent Trump’s withdrawal.

These states have also pledged to pursue independent diplomacy with other national and sub-national jurisdictions around the world, sharing best practise and pursuing climate cooperation.

The EPA has so far lost a number of legal challenges, and is by no means guaranteed to win its case against California. Should these states prevail, Australia has an opportunity to pursue meaningful climate diplomacy directly with the American states.

A 130 million-person market for sustainable technologies also presents a substantial opportunity for Australian businesses in the renewables sector.

American states have a framework in place for international partnerships on climate. State governors and city mayors across the country are eager to brand themselves as international climate change leaders. As Australian federal politics grinds through another round of energy policy and climate change debate, it might be time for Australian states to look outside our borders for inspiration and co-operation.