Fairy tales have always had amazing, wearable tech: from the red shoes and the glass slipper to puss’s boots. Disney’s latest princess, Shuri, the Wakandan teen genius of Marvel’s Black Panther (2018), showing off the “sneakers” she has designed and developed, is the most recent hero to understand a shoe’s potential. 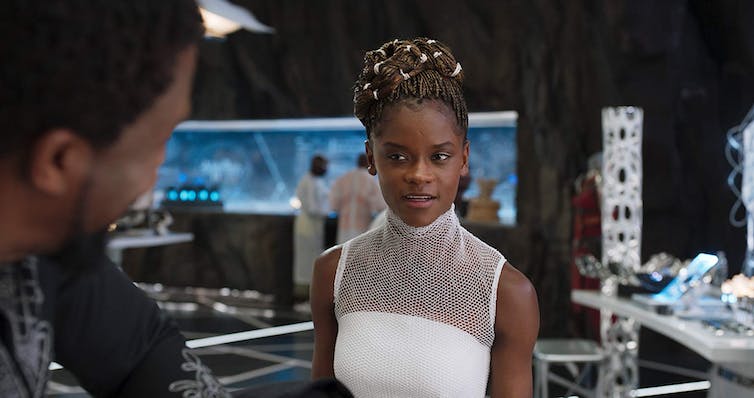 In fairy tales, the seven-league boots cover vast distances in a single step, centuries before Neil Armstrong’s space boots landed on Mars with “one small step for a man, one giant leap for mankind”.

Charles Perrault’s Little Thumbling (1697) even turns the boots into a financial asset. When a poor woodcutter and his wife abandon their children, the children take refuge in an ogre’s house. The youngest, Little Thumbling, thwarts the ogre’s plans to eat them and they flee. The ogre, wearing seven-league boots, gives chase, but tires and falls asleep. The diminutive hero steals the boots from his feet and with them starts a lucrative courier business. 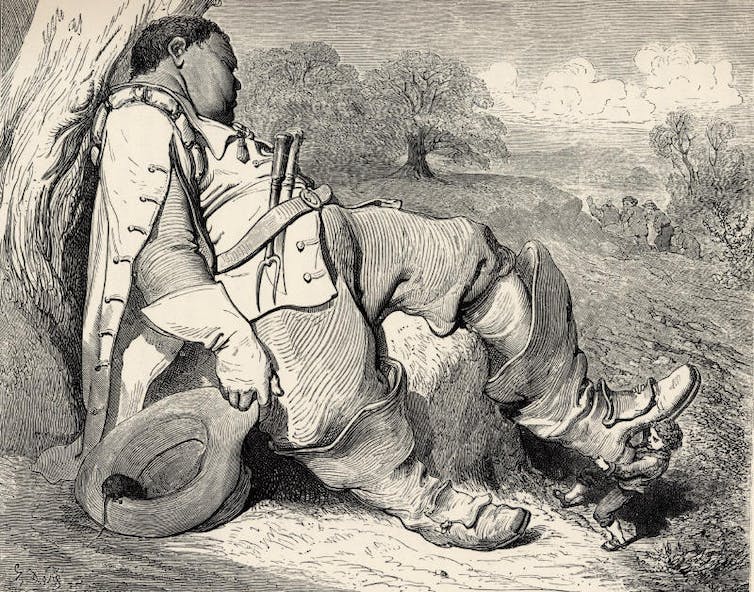 Hans Christian Andersen’s The Galoshes of Fortune (1838) features time and space travelling galoshes, taking wearers to the moon or back to the Middle Ages.

In many tales, shoes are about desire and innovation. 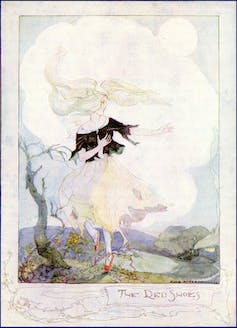 Once upon a time, a little girl took such joy in red shoes, she was cursed. She could not stop dancing in her shoes. She went to the executioner and asked him to cut off her feet. The red shoes, still fused to her feet, danced off into the woods. Such was the fate of Hans Christian Andersen’s shoe-obsessed Karen.

The shoes are the stars of this 1845 tale. Graphic violence, overt religion, and rigid class hierarchy all conspire to condemn a child for her footwear. When the tale begins, Karen is so poor she is barefoot, with wooden shoes for winter. She is given a pair of shoes cobbled from scraps of red cloth and wears them to her mother’s funeral. Karen’s love of red shoes begins there and when she dares to wear those intended for an aristocrat to her Confirmation, she condemns herself. As Hilary Davidson concludes in her essay in Shoes: A History from Sandals to Sneakers, red shoes embody sex and sin.

Cinderella’s glass slipper, meanwhile, was conjured by Charles Perrault in Stories or Tales of Times Past, with Morals (1697). Perrault worked within the orbit of Versailles, the court of Louis XIV, and he associated with fashionable, aristocratic fairy-tale authors like Marie-Catherine Le Jumel de Barneville, Baroness d’Aulnoy. He had more than a passing knowledge of fashion.

The slipper, fashioned by the fairy godmother’s wand, was a slip on, high-heeled mule, fashionable at court and even a little risqué, having associations with the boudoir. In a culture of glass innovation, the artistry of such a shoe would have appealed to Perrault’s aristocratic audience. 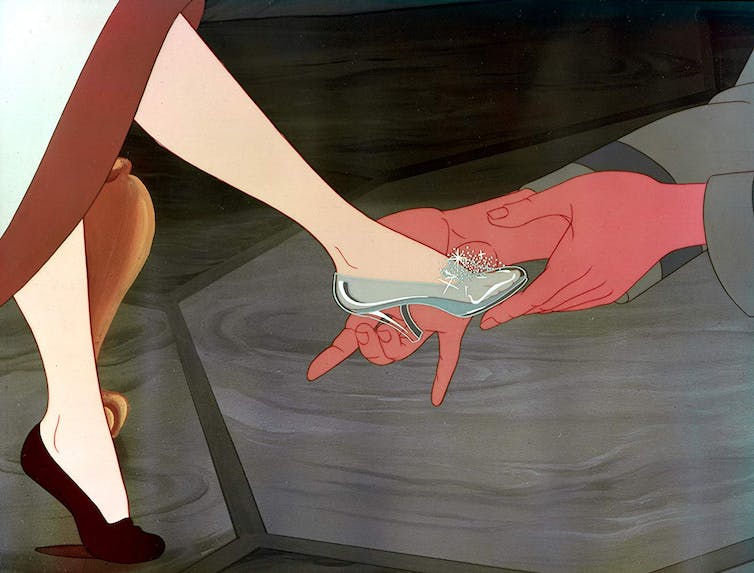 The glass slipper has been reimagined many times. Here it features in the 1950 Walt Disney film Cinderella. Walt Disney Productions

To this day, the impossibility of the glass slipper inspires. The shoe has been reimagined many times in satins, plastics and crystals. In Disney’s Cinderella (2015), the shoe is solid crystal and only fits on Cinderella’s foot thanks to CGI.

But Cinderella didn’t always wear glass. In Europe, the first Cinderella to appear in print is Zezolla, known as the Cinderella Cat, included in the Neapolitan author, Giambattista Basile’s The Tale of Tales (1634-36). She loses a chianiello. Some English translations refer to this as a patten, worn to protect one’s shoes from the street.

However, the chianiello is related to the remarkable platform shoes with wooden or cork bases, worn by women in the Renaissance. While some served as overshoes, many were decorative, featuring ornate velvet and other trimmings, and worn in their own right. Red was a common colour and the shoes have long been associated with courtesans. 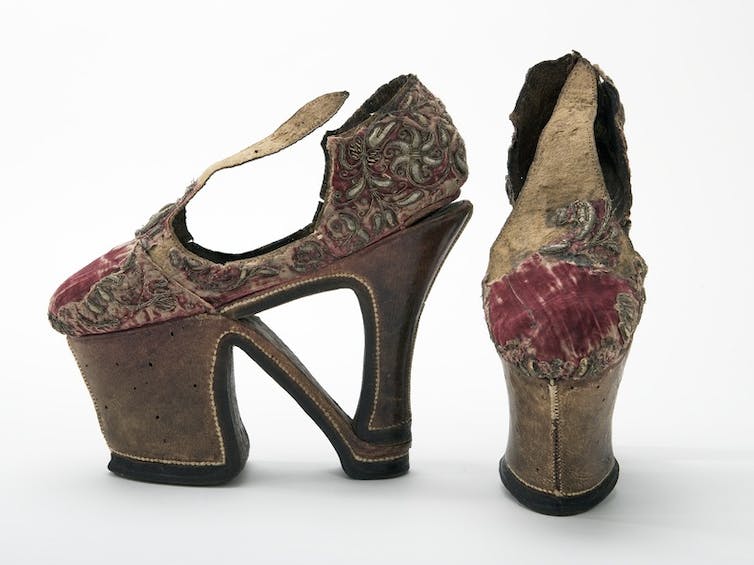 Red was a popular colour for platform shoes worn during the Renaissance. Wikimedia Commons

Madame D’Aulnoy, the author who gave us the term “fairy tale”, presents a quick-witted Cinderella – Finette Cendron (1697). After going to the ball, she loses her slipper walking home in the dark. It is a red velvet mule, embroidered with pearls, the height of fashion in Louis XIV’s court. The following day, the Prince discovers it while hunting in the forest. 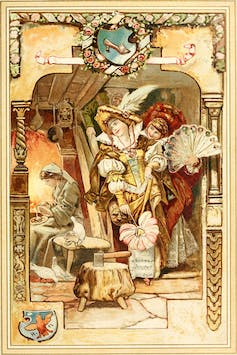 A 1910 illustration of The Brothers’ Grimm Cinderella. Wikimedia Commons

D’Aulnoy’s prince frankly has a shoe fetish. He sleeps with it under his pillow. He caresses it. He languishes with love for the mule. He drives his parents and physicians to their wits’ ends. Presumably, he marries Finette to obtain the other slipper. For d’Aulnoy, it is not the woman who has a mad passion for shoes, but the Prince.

By the time Wilhelm and Jacob Grimm edited their fairy tale collections, fashion had shifted from the mule to the fabric or kid slipper. Their Cinderella (1812/1857) dances in gold and silver shoes: not solid metal, but likely embroidered in metallic thread. They are easily damaged. After her stepsisters cut off bits of their feet to try on the slipper, it is returned to Cinderella’s foot as a ruined, revolting object. 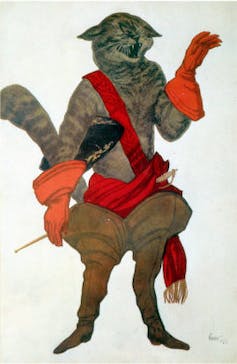 In the Grimms’ The Worn-Out Dancing Shoes (1815), too, shoes are ruined. The King wants someone to solve the mystery of how his daughters wear out their shoes every night. They were dancing. Slippers of the period had thin soles. If they’d only had sturdier shoes, the princesses might never have been found out.

In fairy tales, only the very poor or mistreated have no shoes or shoes of wood or iron. Good shoes allow mobility, protecting the feet from the conditions of terrain and weather. Shoes are a sign of respectability, even authority.

In Perrault’s The Master Cat; or, Puss in Boots (1697), the feline con artist requests boots before helping his master. He receives two boots, giving him an upright stance that, along with speech, makes him a match for humans. Earlier tales by Basile and Straparola feature female cats, but they don’t have boots and they don’t become great lords like Perrault’s tomcat.

From tech to fetish, shoes are the sole of human status, the fairy tales tell us.