Prime Minister Malcolm Turnbull will invite a leadership “spill” motion at midday Friday, once a majority of Liberals formally ask for a party meeting.

He will not contest the subsequent ballot if - as anticipated - the spill is carried, Turnbull announced to a lunchtime Thursday news conference.

Before the meeting, the Solicitor-General on Friday will provide an opinion on the constitutional eligibility to sit in parliament of challenger Peter Dutton.

Early Thursday afternoon, the final signatures for the party meeting request were being gathered.

The delay and the early provision of the Solicitor-General’s advice give Treasurer Scott Morrison extra opportunity to build support for his own bid for the leadership as an alternative to Dutton.

After a morning of chaos and multiple ministerial resignations, including that of Senate leader Mathias Cormann, Turnbull told his news conference that if he is ousted he will quit parliament - increasing the prospect of an early election.

He said he had “made it very clear that I believe former prime ministers are best out of the parliament”.

The government has a one seat of majority and his seat of Wentworth, although it has a strong margin, would be vulnerable in a byelection because Turnbull is personally very popular there. A byelection would not be needed if there were an early election.

Turnbull said that assuming the spill was carried, the new prime minister would “have to obviously satisfy the Governor-General that they can command a majority on the floor of the House of Representatives.

"In the case of Mr Dutton, I think he’ll have to establish that he is eligible to sit in the Parliament.”

Turnbull delivered a swingeing attack on those who have undermined him.

“A minority in the party room, supported by others outside the parliament, have sought to bully, intimidate others into making this change of leadership that they’re seeking.

"It’s been described by many people, including those who feel they cannot resist it as a form of madness,” he said.

“It is remarkable we’re at this point, where only a month ago we were [in the public polling] just little bit behind Labor and in our own polls a little bit ahead - but in any view thoroughly competitive.”

Turnbull has been under consistent assault not only from Tony Abbott and other Liberal critics over a range of issues, especially energy policy and immigration, but also from commentators in the Newscorp media, especially on Sky, and from shock jocks on 2GB.

Turnbull said that what was happening was “a very deliberate effort to pull the Liberal party further to the right.”

Stressing how vital it was to resolve the issue of Dutton’s eligibility, he said: “This is a very, very significant point. As we all know, section 44 has been a companion of this 45th parliament.

Legal experts suggest Dutton could be ineligible under the constitution’s section 44 provision on pecuniary interests. This says a person is incapable of sitting if they have “any direct or indirect pecuniary interest in any agreement with the Public Service of the Commonwealth”.

Dutton through a family trust has an interest in child care centres that receive Commonwealth funding. The key question is whether this involves an agreement with the public service.

Dutton’s legal advice is that he has no constitutional problem, and on Thursday he issued updated legal advice.

The government shut down the House of Representatives but does not command the numbers in the Senate so had to endure question time with senior ministers who had resigned on the backbench.

Liberal deputy and Foreign Minister Julie Bishop will throw her hat into the leadership ring.

Bishop, from Western Australia, has been deputy Liberal leader since 2007 under multiple leaders. She is a moderate, rates well in the opinion polls, and has a high profile internationally as well as locally. She is in much demand from backbenchers to visit their seats and is a good fund raiser.

But she will go into the ballot with the disadvantage of having made many enemies in a long political history.

Her entry into the field complicates the situation and makes the outcome even less certain. 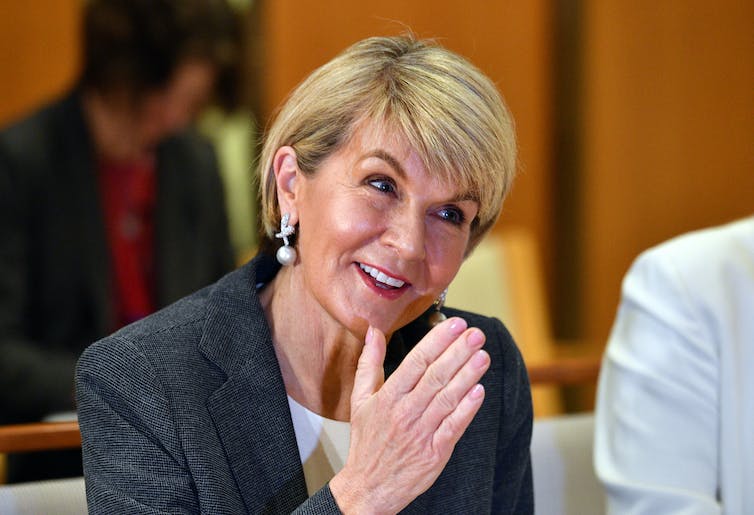