They’re made of carbon – but there’s something almost supernatural about diamonds.

Just the word diamond invokes luxury, desirability and toughness. Yet when we think of the element carbon we are more likely to think of charcoal; soft, black, opaque, earthy, light-weight. 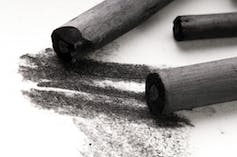 Charcoal is also made from carbon – but it hasn’t been subjected to enormous pressures like diamond. from www.shutterstock.com

It’s fascinating to see how the crystalline arrangement of carbon atoms transform when subjected to pressures greater than about 40 kilobars (the equivalent of 40,000 Earth atmospheres). These conditions are experienced at depths in the earth from about 120km down.

And some diamonds come from way, way deeper – more than 650km (about the distance from Canberra to Melbourne) into the Earth. Tiny imperfections in such diamonds give us clues about what’s happening in the Earth’s hidden geological layers.

Read more: What is a gem? And why painite from Myanmar can fetch US$60,000 per carat

In contrast with carbon in its low pressure form as charcoal or graphite, carbon atoms in diamond are fixed together in a strong, three dimensional network. This leads to unique physical properties: diamond is a clear, extremely hard, often colourless mineral with a very high density.

Diamonds sparkle and have internal fire because of their very high refractive index. This means light is “caught” inside the crystal and re-reflected off the internal surfaces. Faces and facets made by gem cutters accentuate this property. 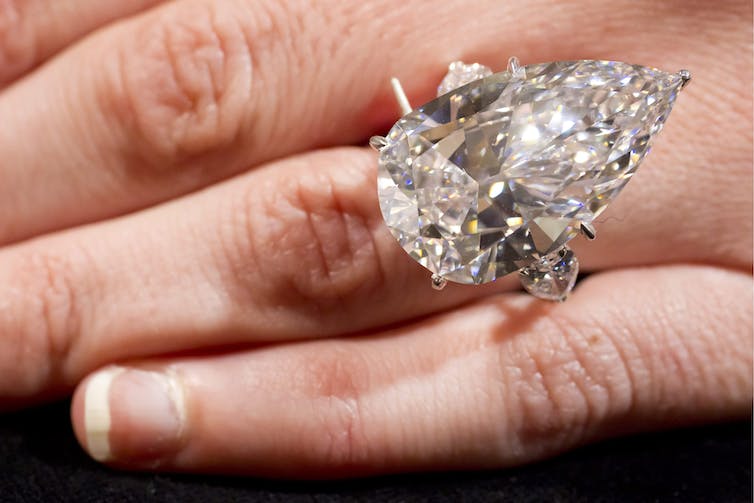 The sparkle of a diamond is due to light being bounced around inside its crystal structure. Alessandro Della Bella/AAP

Violently erupted to the surface

Although diamonds have been prized as valuable gems for a long time, until the early 1700s virtually all traded diamonds came from river gravels (known as “alluvial deposits”) in India.

Then in the early eighteenth century diamonds were discovered in Brazil, and from 1866 onwards were mined in South Africa. It was in this country that diamond’s major, violently erupted, volcanic source rock known as “kimberlite” was identified for the first time.

This recognition fundamentally changed the diamond exploration and mining industry, and quickly led to vastly increased production and to the high demand from the modern jewellery industry.

Supply of diamonds to the market has long been tightly controlled by a small number of major producers – examples include De Beers (South Africa-Botswana), Al Rosa (Russia), Rio Tinto (Argyle Mine Australia and Canadian mines) and Lucara Diamond Corporation (Karowe Mine, Botswana). 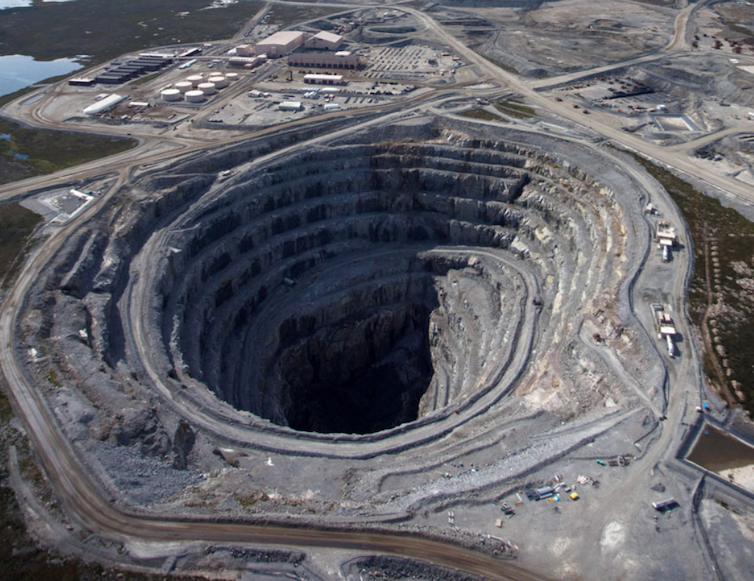 The value of diamonds

Unlike other mined commodities such as copper, gold, oil or coal, diamond has no spot market. Its value is variable and highly subjective, assessed using the “4C” system: colour, clarity, cut and carat (5 carat = 1 gram).

Per carat, uncut diamond values typically vary from around $US10 to $US3000. Very large (sometimes very historical) gem-quality diamonds however may command price orders of magnitude beyond this.

The intensely blue 45.5 carat Hope Diamond started its traded history in India in the early 1600s, and is valued at more than US$200 million. Other recent high-priced diamond sales include the Pink Star (59.6 carats, $US71 million) and the Oppenheimer Blue (14.6 carats, $US57.5 million).

The largest diamond recently sold is the uncut Botswanan 1,109 carat diamond, the “Lesedi La Rona”. This sold for $US53 million. 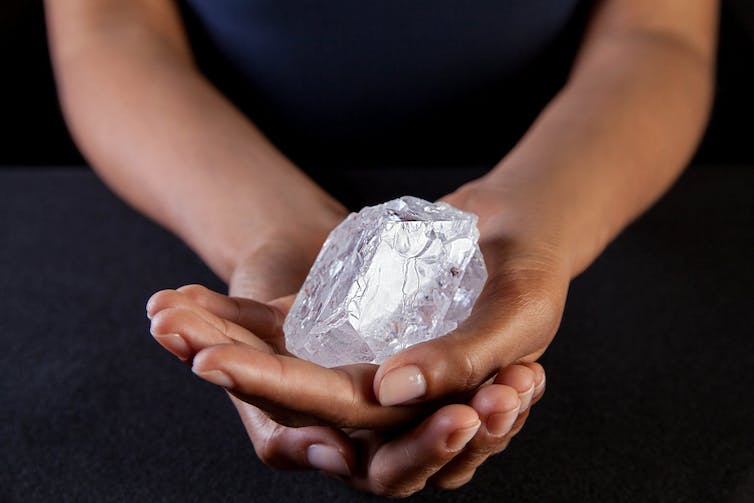 Many diamonds contain inclusions of other minerals, which are captured samples from the deep Earth rocks in which the diamond grew. These provide important information for geologists.

For example, inclusions of the minerals olivine, pyroxene and garnet tell us their host diamonds grew at depths between about 120 and 300km, in a layer of the Earth known as the sub-continental lithospheric mantle.

This layer is part of the Earth’s continental tectonic plates, and lies below the oldest regions of Earth’s continental crust known as “cratons”. Cratons are up to four billion years old - examples include the Australian Pilbara, the South African Kaapvaal, the Canadian Slave and the Russian Siberian craton. 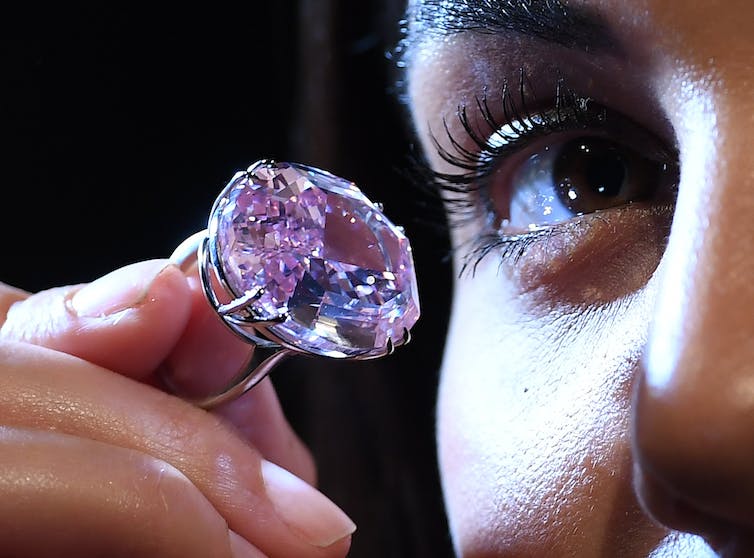 The Pink Star is said to be the largest internally flawless fancy vivid pink diamond ever graded. EPA/AAP

Although the sub-continental lithospheric mantle is the most common source of diamonds, some come from much deeper layers in the Earth.

These are called sub-lithospheric diamonds, and identified by mineral inclusions consistent with being exposed to much higher pressures found at depths of more than 650km.

A recent study looked at a type of rare blue diamond like the Hope Diamond. The researchers consistently detected very high pressure mineral inclusions indicating their diamond hosts grew at depths of at least 660km. These diamonds are blue because of the presence of trace amounts of the element boron. 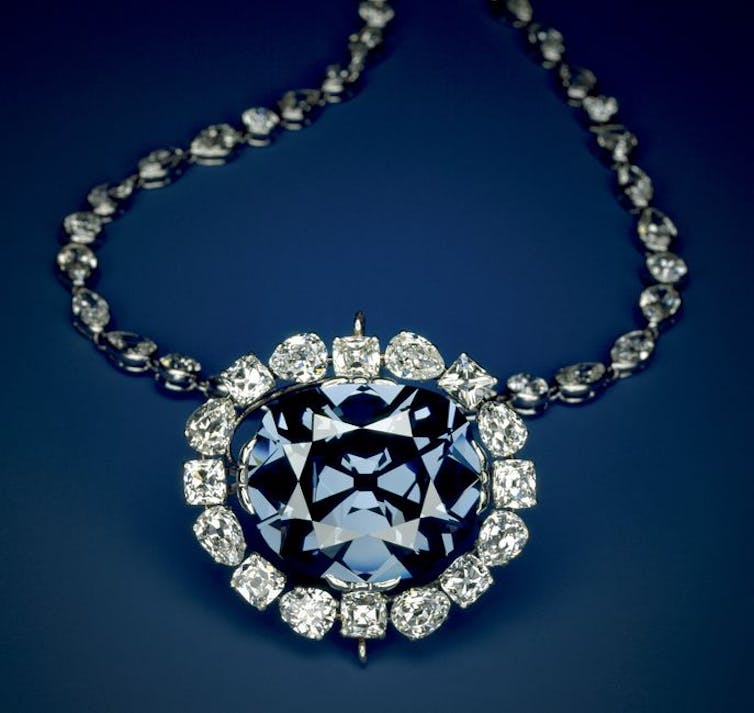 The Hope Diamond started its traded history in India in the early 1600s. Smithsonian National Museum of National History

The question of how boron ended up at great depths in the Earth’s mantle is a fascinating one. Boron is an element that on Earth is highly concentrated in the upper continental crust (less than 20km deep) and in ocean water. Its concentration in deeper mantle rocks is typically extremely low.

Boron then must have been re-introduced to the deep layers where the diamonds grew.

This would likely have happened through a process called deep subduction, where the boundary of an oceanic tectonic plate (about 100km thick) fails, and the plate then collapses into the deep earth’s mantle. This moves boron and other materials from the shallow layers of the Earth down into depths of over 700 km.

Kimberlite eruptions then bring the diamonds up towards the surface. 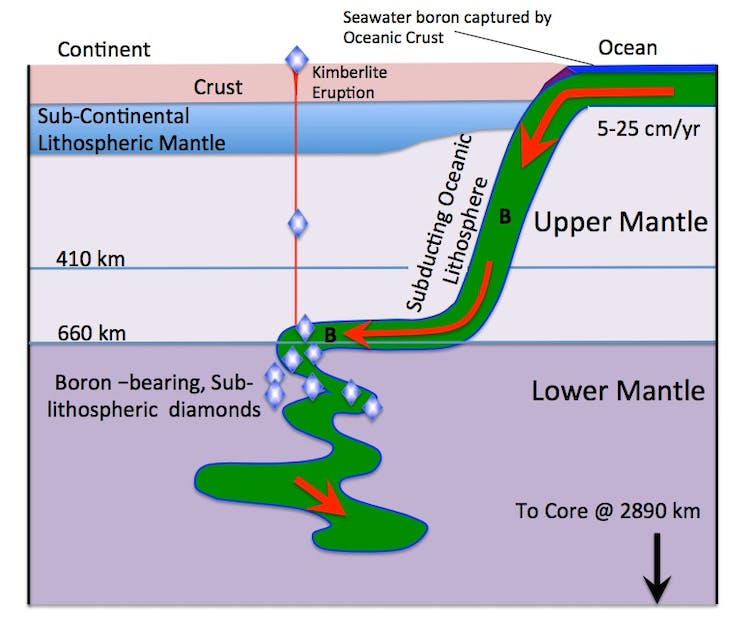 Subduction of oceanic lithosphere with boron (B) captured from the oceans and delivered by the subducting oceanic slab to lower mantle depths in excess of 660km. Here the boron is supplied to the growing ultra-high pressure sub-lithospheric diamonds. John Foden, Author provided

A window into deep Earth

In addition to the boron example above, evidence from other diamond mine sites also supports the idea that Earth elements move from relatively shallow to deeper into the Earth through the process of subduction.

This has been detected by tracking different forms of carbon in diamonds from the South African Cullinan mine, and in my own research on mineral inclusions in South Australian diamonds. 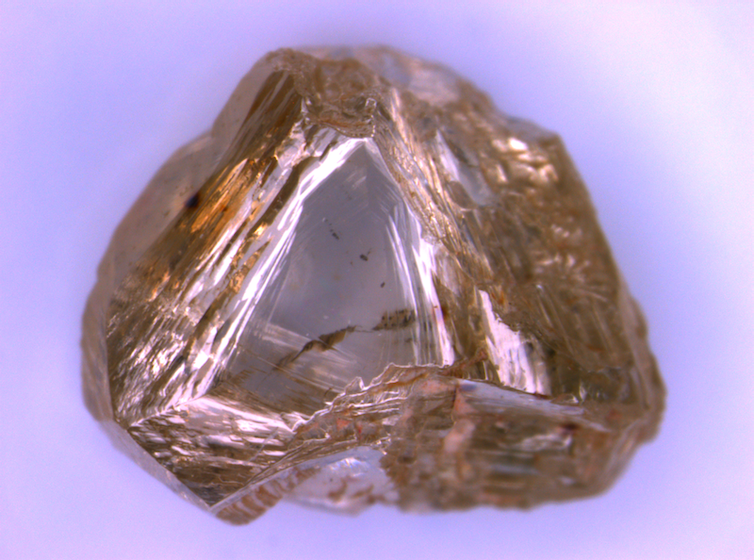 Deep parts of the Earth still have a physical connection with layers closer to the surface.

So yes diamonds are valuable due to being beautiful, hardy and relatively rare – but they also provide a fantastic window into the structure and the history of our Earth.