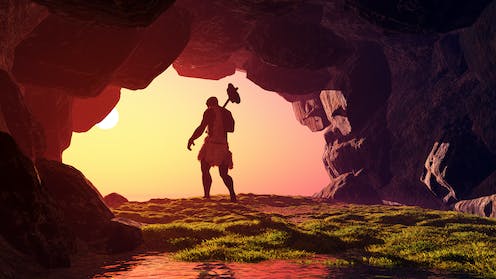 But it’s also used to describe cultures that are seen as “backward” or “primitive”. Is this usage relevant, or even accurate?

How a technology was forgotten - and rediscovered

The earliest stone tools we know of date to 3.3 million years ago, made by unknown human ancestors in Africa.

Stone working was a key technology as hominins spread throughout the world, and remained so until the Iron Age, which began about 3,000 years ago. After that, their use started to decline in some parts of the world.

By the Medieval period, from around 500 to 1400CE, knowledge of stone working was almost completely lost in Europe.

Flint arrow and spear points were often found lying in fields. People thought they were weapons used in the War in Heaven - the Biblical tale of when the angels ousted Lucifer - or were made by elves and fairies.

It was only in the early 1700s that European people realised that stone tools - frequently found in association with extinct animal bones - might be the work of earlier humans.

A French missionary made a crucial leap. In 1724, Joseph-Francois Lafitau noticed that Iroquois people in Canada used stone tools similar to those found at European archaeological sites. From this observation, he suggested that contemporary cultures could be used as an analogy for the past.

More than 100 years later, in 1859, Charles Darwin published On the Origin of Species. He proposed that animal species changed over time through natural selection, sometimes called “survival of the fittest”.

Applied to human societies, Darwin’s theory gave rise to a race-based notion of “progress” - with the white, Christian male at the pinnacle of human evolution.

American anthropologist Lewis Morgan, in his 1877 book Ancient Society, argued that all human populations passed through the stages of “Savagery, through Barbarism to Civilization”. Stone tool technology, he argued, was a feature of savagery.

The stage was set to construct Indigenous people as living representatives of the past who had never evolved. This was no longer an analogy, but a judgement.

In the 19th and 20th centuries, these ideas were put to sinister use as European nations expanded their colonies in Indigenous lands.

Placing Indigenous people lower on the evolutionary ladder justified genocide, land theft and forced conversion to Christianity - all in the name of “civilisation”. The use of stone tools thus became a liability.

In Australia, “Stone Age” was seen not as a technology practised by Aboriginal people, but rather as the essence of what they were.

“Stone Age” people were assumed to have no system of land tenure. For that, you needed to improve the land through agriculture - for example by vegetation clearing, cultivation and animal husbandry.

An example of this concept occurs in the science fiction novel and blockbuster movie The Martian. Astronaut Mark Watney, abandoned on Mars, grows potatoes to keep himself alive, leading him to say:

They say once you grow crops somewhere, you have officially colonised it. So, technically, I colonised Mars.

In recent years, it’s been recognised that what the European invaders saw on arrival in Australia was a landscape curated by thousands of years of land management, rather than a wilderness.

Ironically, the use of stone tools to grind seeds or grain was once held to be a hallmark of early agriculture. But archaeologists have shown that Aboriginal people (most likely women) used this technology thousands of years before people in Europe or the Middle East.

The most successful technology in human history

By the 1960s archaeologists and anthropologists had moved away from the idea of “progress”, influenced by the work of the German-American anthropologist Franz Boas.

Instead of being ranked in a hierarchy of evolution, human cultures were seen as internally coherent social and political systems. Indigenous worldviews were no more or less “advanced” than Western ones.

But old ideas die hard, especially when they support contemporary political structures. The view that Aboriginal people are living in the Stone Age is still held by some people in Australia today.

It resurfaces whenever Aboriginal people are thought to be gaining too much political traction, as these tweets demonstrate:

Contrary to popular belief, stone tool technology is not simple. It is highly skilled, requiring knowledge of geomorphology, geology, fracture mechanics and the thermal properties of stone.

Thousands of archaeologists studying stone tools can only approximate the complexity of a science that enabled Aboriginal people to survive and thrive through some of the most challenging environmental changes in human history.

These artefacts, manufactured from glass, required an extraordinary amount of skill and were also valued for their aesthetic qualities.

Stone tools are still being made and used, and not just by Indigenous people. In 1975 the archaeologist Don Crabtree underwent surgery with obsidian scalpels he had manufactured himself.

Obsidian blades cause less tissue damage than surgical steel knives, and the wounds heal more quickly. Surgeons still use them.

Stone working is one of the most successful technologies used by humans and their ancestors - from 3.3 million years ago to the present day.

Aboriginal cultures do not represent ancient societies. It is naive to assume that they are not also the product of thousands years of adaptation and innovation, which is ongoing. They are no more living representatives of the past than any other contemporary society.

Archaeologists in Australia abandoned the term “Stone Age” decades ago. So should you.