Spectacular images of recent volcanic eruptions in Hawaii are a little disheartening – especially given news reports suggesting there is a sleeping volcano under Melbourne that could awaken and erupt at any moment.

Understanding the geological differences between Melbourne and Hawaii is really helpful in working out how we can keep an eye on future risks in Australia.

Read more: Australia's volcanic history is a lot more recent than you think

Victoria and South Australia do host an active volcanic field, called the Newer Volcanics Province (NVP). This is not a single volcano with a large single chamber of molten rock (magma) — the common image of a volcano — but a widespread field of multiple small volcanoes, each with a small volume of magma. 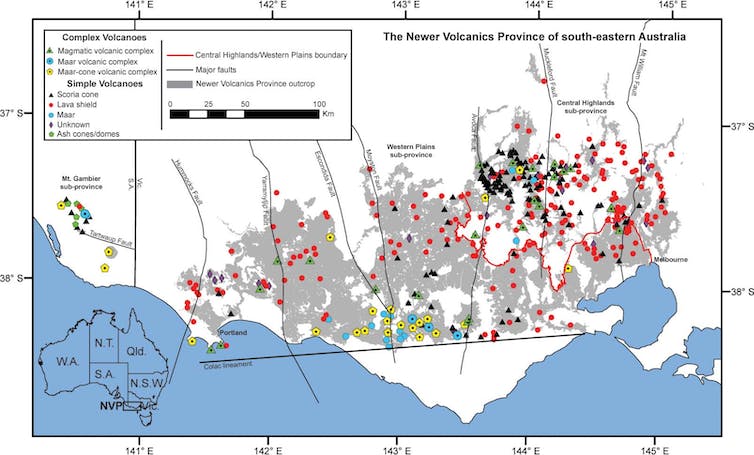 Location of the Newer Volcanics Province in southeast Australia showing the extent of lava flows and the different types of volcanoes. Julie Boyce 2013

Melbourne lies at the eastern end of the NVP, and the most recent eruptions in this area occurred over a million years ago.

Mt Gambier in southeastern South Australia represents the western margin of the volcanic field and the most recent eruption — only 5,000 years ago.

Between Melbourne and Mt Gambier there are more than 400 small volcanoes that erupted over a period of 6 million years.

Read more: When the Bullin shrieked: Aboriginal memories of volcanic eruptions thousands of years ago

The NVP was most active between 4.5 million to 5,000 years ago and volcanologists consider the field to still be “active” with the potential for future eruptions.

We do not know when the next eruption will take place. 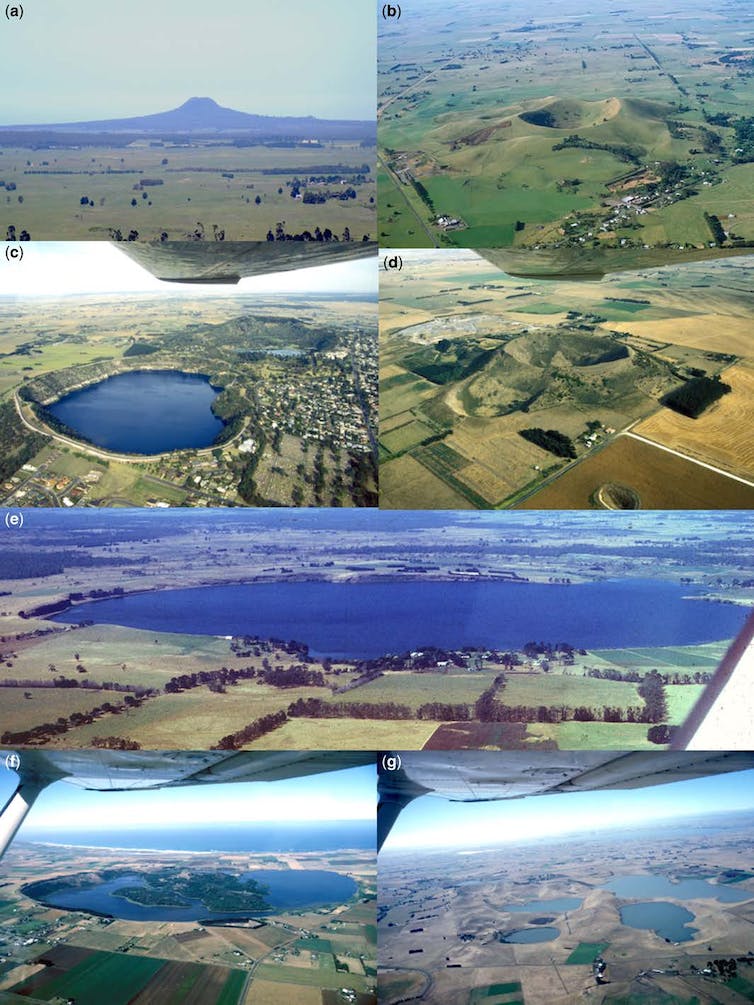 The NVP is located within a tectonic plate – and not along a plate edge like the Ring of Fire volcanoes (for example, Mt Agung on Bali).

Tectonic plates are large slabs of rock made up of the Earth’s crust and uppermost part of the mantle (the lithosphere) which form the outer shell of the Earth, and move around slowly relative to each other.

While Kilauea volcano in Hawaii is also located within a tectonic plate, it has several key differences with the NVP in Southeastern Australia.

It’s worth noting here that the makeup of the magma is similar in both locations, with both erupting runny basalt – a type of rock low in silica, and high in iron and magnesium.

We suspect that in Australia’s NVP, magma can move very fast from its source to the surface (on a time scale of days). This can bring rock fragments of the mantle (xenoliths) to the surface as the magma moves too fast for them to melt. 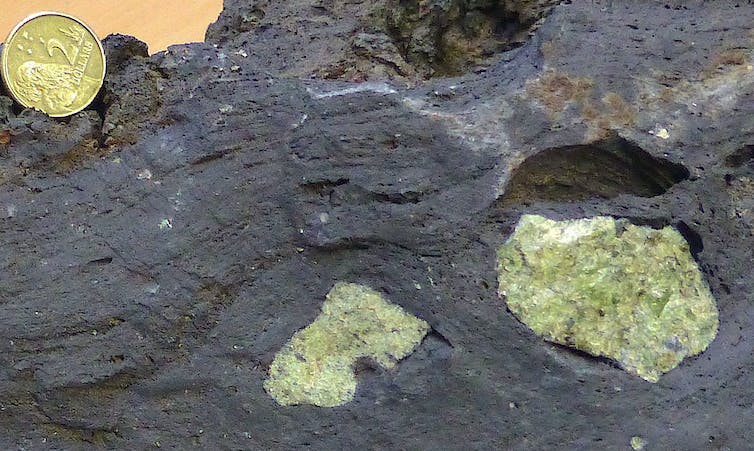 Fragments of the mantle (xenoliths) in a volcanic bomb erupted at Mt Noorat, brought to the surface by ascending magma. Ray Cas

Hawaiian volcanoes can erupt numerous times, but NVP volcanoes are largely monogenetic — that is, each only erupt once or over a restricted period of time.

Hawaii is located on the oceanic crust of the Pacific Tectonic Plate, which is a thin (around 7 km) layer of material that is dense and rich in iron. The magma can rise through this crust quite easily.

In contrast, the NVP is located on continental crust which is much thicker (about 30km), richer in silica and much less dense. Magma finds it much harder to travel through this kind of material.

Read more: Is there a new volcano on Hawaii?

The explosivity of a volcanic eruption can depend on availability of water.

“Dry” eruptions – where magma has little-to-no interaction with ground water or water on the Earth’s surface – typically produces mildly explosive eruptions such as lava fire fountains, showers of lava fragments and lava flows.

The Australian Mt Gambier eruption 5,000 years ago was a “wet” eruption, and had a volcanic explosivity index of 4 on a scale of 0-8 (where 0 represents a lava eruption, 1 a spectacular lava “fire” fountain as recently witnessed in Hawaii, and 8 represents a catastrophic explosive super-eruption).

The accompanying ash column is estimated to have reached 5km to 10km into the atmosphere.

On Hawaii explosive eruptions are rarer because the magma has a low gas content and groundwater aquifers are not as large as in the NVP. However, when lava flows into the sea there are often phreatic or steam explosions which can be hazardous to nearby spectators.

Read more: From Kilauea to Fuego: three things you should know about volcano risk 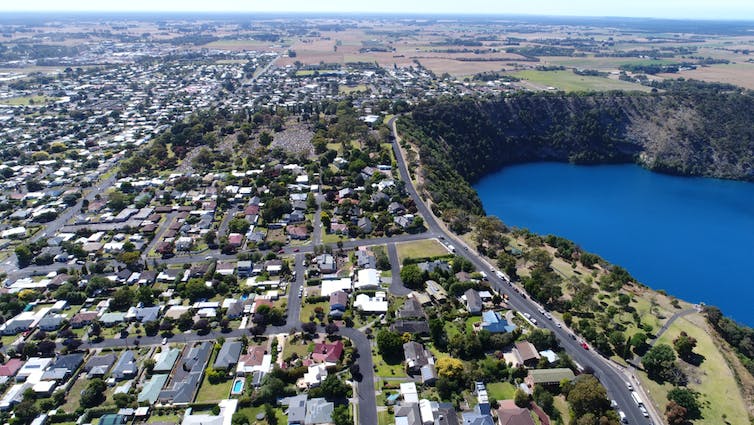 Mt Gambier’s Blue Lake was created by a huge volcanic eruption. from www.shutterstock.com

There’s a lot we don’t know

Another important factor relates to how we keep an eye on volcano risk at the two sites. Kilauea on Hawaii is extremely well monitored, and tracking magma moving underground has helped predict eruptions.

In contrast, the NVP is less well monitored, likely because there is no present volcanic activity, and it’s a huge region.

However, warning signs of an eruption are likely to be similar in the NVP to those on Hawaii – small earthquakes, minor uplift and/or subsidence of the ground, changes in ground temperature and gas or steam rising out of the ground.

Also, based on present knowledge of the NVP, there is no clear eruption pattern we can use to try to predict when or where the next eruption will be.

If the NVP were to erupt, significant impacts on our lives would likely occur. These may include:

Further scientific research is required on active volcanic fields such as the NVP to know how fast magma travels from its source to the surface, how much warning we might have before an eruption, and how long an eruption and its impacts might last.