Playwright Sarah Kane was an “honorary lad” in in-yer-face drama that dominated the 1990s in Britain. Hers was one of few female voices in the testosterone-heavy genre, as well as one of its most prominent, even though her oeuvre was slight: five plays written over five years, and one short film, Skin (1997). The plays were: Blasted (1995), Phaedra`s Love (1996), Cleansed and Crave (1998), and finally 4.48 Psychosis, which premiered in 2000, not long after Kane’s life ended in suicide.

Today considered one of the luminaries of British dramatic writing, her work was hotly debated during her life, none more so than Blasted, a play that met such a furious response on opening night that an entire mythology has sprung around it. Some of the outraged review headlines – most famously Jack Tinker’s “This Disgusting Feast of Filth” – were picked up by the media and amplified into a nation-wide frenzy. The director Stephen Daldry defended it on national television. The first run sold out, with queues around the block for returns.

What incensed the critics in 1995 was the violence, both physical and psychological, that permeates the play in ways that then seemed gratuitous, overblown, and dramaturgically incongruous. Blasted spliced together forms of abuse that until then rarely appeared side by side on stage. The play opens with a chamber piece, a man and a woman in an expensive hotel room in Leeds, “so expensive it could be anywhere in the world.” 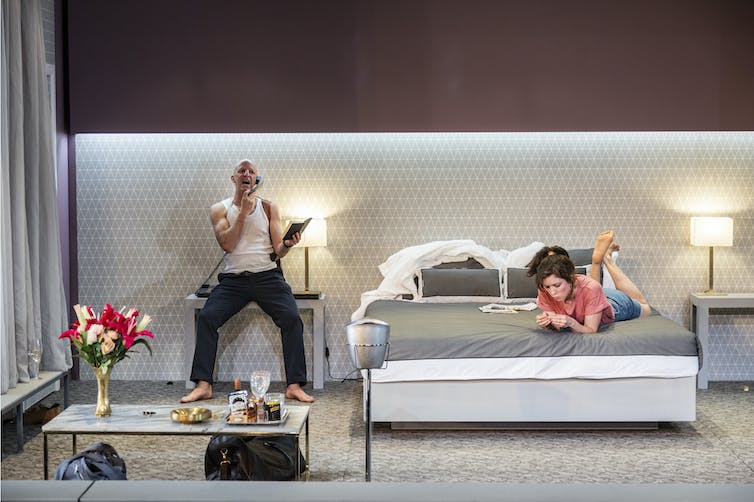 The play opens in a hotel ‘so expensive it could be anywhere’. Pia Johnson

Ian, a middle-aged journalist who rants about the wogs and Pakis taking over Britain, has brought in a much younger and vulnerable Cate, whom he verbally puts down, cajoles, and – it is implied – coerces into sex. The interaction between them is a series of discomforting, not-enthusiastically-consented-to steps towards sexual intercourse. With today’s eyes, it reads like one of those accounts of what Harvey Weinstein allegedly did with his hotel room guests; but even in 1995, the intimidation, power struggle and joylessness were apparent.

However, roughly halfway through the play, as Cate locks herself in the bathroom to have a bath, a soldier erupts into the room. From this moment on, another play entirely seems to take place, one no longer set in Leeds, but in a country for which Ian needs a passport. The intimate violence between a man and a woman suddenly explodes into the panoramic violence of bombs, guns, mass rapes. The soldier rapes Ian, after telling him about the atrocities committed outside, to his own girlfriend. A bomb blasts through the room. 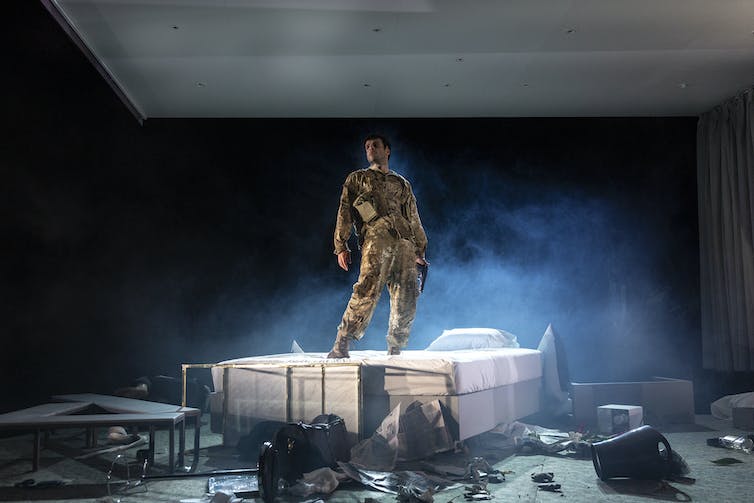 And then it all grows bigger, operatic almost. The soldier gouges Ian’s eyes out. Cate returns with a baby, which dies and is buried under the floorboards of the room. We are in Tarantino territory by this point: grotesque violence, theatrical, all plot dissolving into a series of disconnected, visually pregnant scenes as Ian descends into despair.

Interestingly, even though Kane’s later works, plotless and poetic, are considered to be the “hard” ones, they all seem to get staged more often than Blasted. The cynic in me thinks that, as hard as it may be to stage a prose poem, it may not be as hard as staging a bomb going off in a hotel room. Anne-Louise Sarks’ production of Blasted for the Malthouse is the first stage version I have ever seen - and it offers an opportunity to observe how this defining play of the 1990s has aged.

In 1995, Blasted was a play that connected the ordinary, everyday life in the UK, marked by hooliganism, lad culture and post-Thatcherism, to the atrocities of war in former Yugoslavia, a war which was schizophrenically experienced in Western Europe as both geographically close and unfathomably distant.

The collapse of contexts and genres that marks the play (and that so infuriated the critics) is a gesture that would later repeat in Michael Haneke’s films (particularly Hidden), as well as in Lars von Trier’s: by the 2000s, the slip from middle-class banality to splatter horror would become common. It would also become more legible, as an expression of anxiety: that the prosperous peace here and the civic collapse there are somehow linked, perhaps even causally.

In 2018, Sarks’ production is a Blasted of the #MeToo era, and of the Syrian refugee crisis. The notion that terrorism and domestic violence are intimately linked by underlying diseased masculinity is no longer just a poetic metaphor: it is discussed in policy papers and newspaper articles around the world. 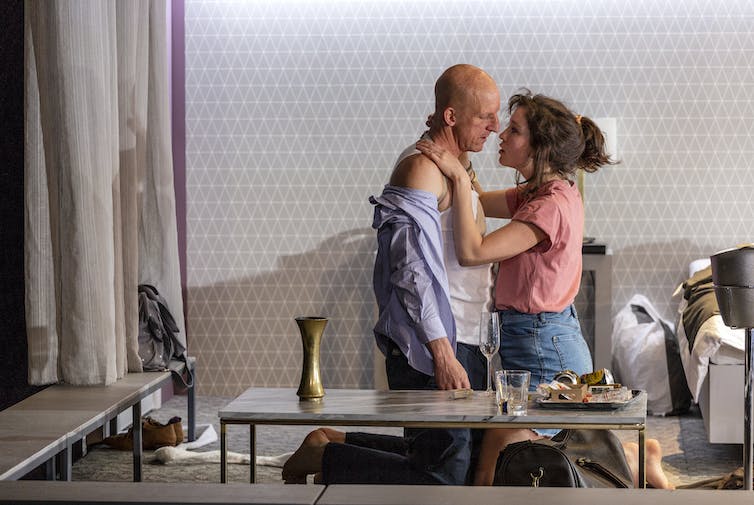 In 2018, the link between domestic violence and terrorism is no longer just a metaphor. Pia Johnson

2018 makes Blasted look prescient, prophetic. Sarks, who is an exceptionally imaginative and courageous director, but has never been one for unnecessary statements, deliberately pares back directorial gestures to let the play speak. It is not a showy production.

Marg Horwell’s normcore set (very similar to her work on Revolt, She said. Revolt Again in 2017) is a box of grey hotelness, later explodes to reveal the walls and utilities of the Malthouse building. The actors are exceptional, but none draw attention to themselves at the expense of the ensemble. The production takes a while to find its rhythm, but once Fayssal Bazzi’s Soldier enters and the war gets going, it grips and holds us breathless until the very last words of the play. It is the work of a director who has come into her full powers and has nothing left to prove.

It is hard to know how the contemporary audience will receive a stage work where so much of the effect hinges on being genuinely terrified by simulated rape, or theatrical cannibalism. The 1990s were, in some ways, a simpler and more naïve time.

But even if some of the mechanics of Blasted have aged, its central emotional core stands solid. Kane often said that all her works are really about love. The central journey in Blasted is not a tourist trip through extreme violence. It’s the emotional journey of a bully who learns to be grateful for small acts of kindness.

Blasted is being staged at the Malthouse Theatre, Melbourne, until September 16.