Australia’s demand for plasma, a component of blood that transports nutrients, is rapidly outpacing domestic supply. This means enormous quantities of plasma must be imported from overseas, where donors are paid for donating.

These two factors limit the domestic supply of plasma, is unjust for Australian donors and makes domestic collections financially burdensome.

Australia needs a competitive market that pays plasma donors. This would address the injustice to Australian donors and potentially save taxpayers over A$200M annually.

Plasma is used for people suffering from burns, shock and other medical emergencies and its components are used to treat rare chronic conditions.

Donating plasma takes up to one and a half hours, including around 45 minutes “needle-in” time. During this time, blood cycles through equipment that separates plasma from other blood parts, which are returned to the donor.

For and against compensating donors

In one of the classic texts on social policy, Richard Titmuss claimed paying donors would reduce blood supply and safety.

Titmuss argued compensation would reduce donations by eroding the spirit of volunteerism to help others and would threaten safety because compensation would attract donors with greater likelihood of having transmissible diseases.

This concern seemed justified in the 1980s during the AIDS epidemic. And this encouraged Australia’s policy of not compensating donors for blood products.

But much has changed since the 1970s. Careful screening and medical advancements have eliminated virtually all safety concerns.

My colleagues and I reviewed many studies. We found that of the 19 different incentives offered, 18 increased donations significantly and none ever reduced donations or harmed safety.

In our study with the American Red Cross, donors were 30% more likely to donate if offered $10 gift cards than if only asked to volunteer.

To examine how compensation will affect Australian donations, I conducted a survey asking Australians “how likely” and “how often” they would donate in the next year. 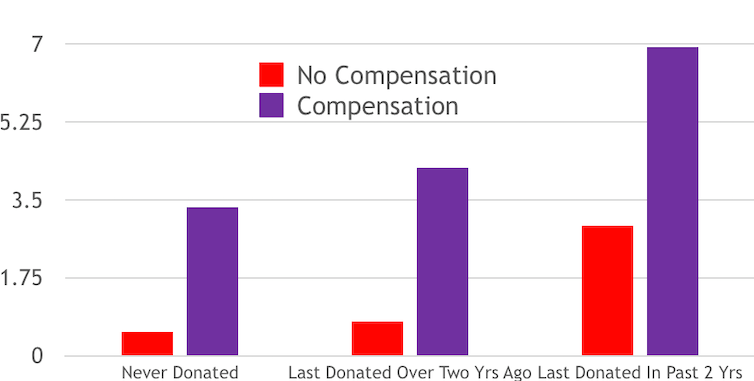 Author provided, Author provided Creating a fairer and less costly system Not compensating Australia’s approximately 150,000 plasma donors for their time is unfair given its enormous value to society, and especially considering we pay for plasma that comes from international donors who are paid for the equivalent donation. The National Blood Authority’s 2016-2017 annual report indicates Australian imports of immunoglobulin, a plasma component, provide 44% of domestic demand. This costs A$120 million while the remaining 56% comes from domestic supply costing A$413 million. This implies the domestic supply of immunoglobulin costs over three times more per unit than what is imported, despite domestic donors not being compensated. Read more: Explainer: what are blood groups and why do they matter? It also implies Australia could save over A$200M annually by importing all immunoglobulin. Likely culprits for the higher domestic costs include the Red Cross Blood Service’s monopoly powers and not compensating donors. Since not offering compensation limits donations, it likely increases other costs, including recruiting donors. And the Blood Service’s monopoly position reduces the normal competitive market motives to constantly search for the most cost effective collection methods. Read more: Three ethical ways to increase organ donation in Australia Given lower international prices, one way to save money is to collect more plasma abroad and less domestically. A much more desirable solution would be to introduce a (regulated) competitive domestic market for plasma. A competitive domestic market should successfully develop following the international market model, would provide new business opportunities and allow compensation to land in Australian rather than international donors’ pockets. Concerns should be no different for plasma coming from a domestic than international market, and the domestic market could be better as we can tailor regulations to our needs rather than rely on international market rules. To save taxpayer money and treat Australian donors more fairly, a competitive market for plasma supply is necessary. Alex Berger provided outstanding support on all aspects of the Survey.