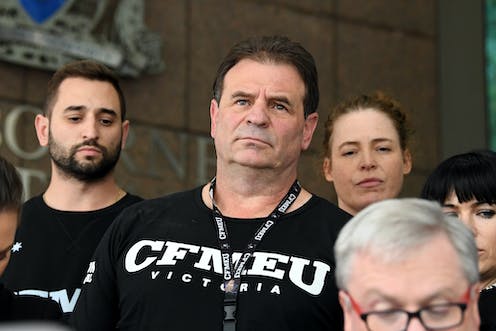 Scott Morrison has fired a broadside at the bad guys of the union movement - those lodged within the Construction, Forestry, Maritime, Mining and Energy Union.

The tweet had Setka’s children with a sign “GO GET F#CKED”; above the picture, the message directed to the Australian Building and Construction Commission read: “LEAVE OUR DADS ALONE AND GO CATCH REAL CRIMINALS YOU COWARDS!!”.

Morrison described the tweet – which Setka later took down – as “one of the ugliest things I’ve seen”.

He recalled “children being used … in those horrific things in relation to some of the protests around terrorism”.

“This stuff just makes your skin crawl,” Morrison said. Asked whether he would consider deregistering the CFMMEU he replied “of course”.

However objectionable, the tweet was no more than an excuse for the government to get stuck into the union and, by association, into Bill Shorten.

If Morrison can successfully carry through on his attack on the CFMMEU, this is potentially dangerous for Shorten.

Shorten has relied on the CFMMEU at key points for political support, such as the last ALP national conference. There’s little doubt that under a Shorten government the union would have the ear of the prime minister – which worries some within Labor.

"Bill Shorten is union-bred, union-fed and union-led, and that’s how he would run Australia.”

(Get used to the “union-bred, union-fed and union-led” line - we’re likely to hear it many times. Morrison is fond of slogans. When Jones told him to stop talking about “dispatchable” power because “out there they don’t understand that” Morrison seamlessly moved to “fair dinkum power”.)

If the push for action against the CFMMEU became serious in the run up to the election, would Shorten want to be out defending the thuggish part of this union?

The Liberals have for years sought to make Shorten’s union background and associations work for them. They haven’t so far had anything like the success they hoped. The question is, can Morrison?

On 3AW, Morrison said the Setka tweet was “the straw that broke the camel’s back.”

He wouldn’t “rush into anything [against the union]. But I am looking very seriously into it”, and would discuss action with the Minister for Industrial Relations, Kelly O'Dwyer. Pushed on the process, Morrison was not precise, saying: “that’s what I’ve asked the minister to look at and come back to me with a plan.”

But “the plan” is likely to show that talking about having the union deregistered is one thing; actually achieving that is something else.

One route is for the minister to apply to the federal court.

Registration may be cancelled if a union is found to have engaged in continued breaching of awards or agreements, been guilty of illegal action, or flouted legal orders.

But the complication is that the case must be made against the whole organisation rather than one branch or division. And the court would have to be satisfied that the matter was serious and that cancelling registration would not be unjust.

It would probably be hard – to say nothing of unfair – to run the case against the union overall. The CFMMEU is the curate’s egg. It is bad in part – its construction division.

The obvious way to deal with that part of the union would be via the Ensuring Integrity legislation. This allows for applications to the federal court for the suspension of the rights and privileges of a section of an organisation, and for particular individuals to be disqualified from holding office.

The problem here is that the legislation is still before the Senate.

There are strong arguments that can be made for action against the construction division of the CFMMEU – the Setka tweet is not among them - although it might be more practical to disqualify the offending officers.

If the government wants to take on the lawless part of this union it would have to get its bill through the Senate fairly soon – but that means mustering the numbers. If you want to wield a stick, you need the right one.