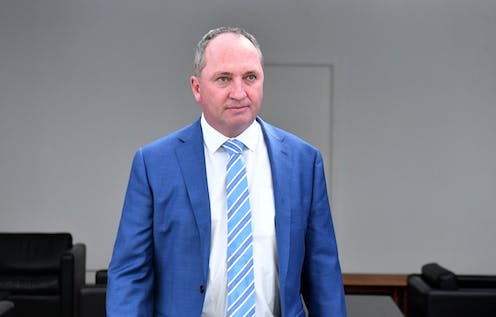 The Nationals have been unable to make a finding on the claim by a woman that former deputy prime minister Barnaby Joyce sexually harassed her.

Catherine Marriott, former West Australian Rural Woman of the Year, made the allegation at the height of the controversy over Joyce’s affair with his former staffer (and now partner), Vikki Campion. He claimed at the time it was the tipping point that led him to quit the Nationals’ leadership, although he has said subsequently when Campion became pregnant, he always knew he would have to go.

Marriott, who made the complaint in confidence, was highly upset when her name was quickly leaked.

She said in a Friday statement expressing her frustration at the inconclusive result of the eight months investigation that “this outcome simply isn’t good enough”.

She had been told by email on Thursday that the NSW National Party “has been unable to make a determination … due to insufficient evidence”.

“This is despite the investigation finding I was ‘forthright, believable, open and genuinely upset’ by the incident.

"The result of this investigation has underpinned what is wrong with the process and the absolute dire need for change”, she said.

Joyce on Friday had no comment beyond standing by what he had said initially, when he described the accusation as “spurious and defamatory”.

Marriott said she was “extremely disappointed that after eight months of waiting, three trips to the east coast at my own expense to meet with the party, my name and confidential complaint being leaked to the national media, and my personal and professional life being upended, the National Party have reached a ‘no conclusion’ verdict.”

But she said she wasn’t surprised because the party hadn’t had an external process in place to deal with such a complaint “My complaint was handled internally by the NSW National Party executive with no professional external expert brought in at any stage.”

She said the only positive outcome from a “harrowing experience” had been “the development of much improved policy by the party”, which she had encouraged. She was heartened that people who found themselves in similar situations in future “will have a robust policy in place to assist them”.

The outcome of the investigation comes as the Liberal party has been rocked by allegations of bullying during the leadership battle. Several Liberal women have spoken out strongly against the bad behaviour, and MPs are waiting to see whether individuals are named in parliament next week.