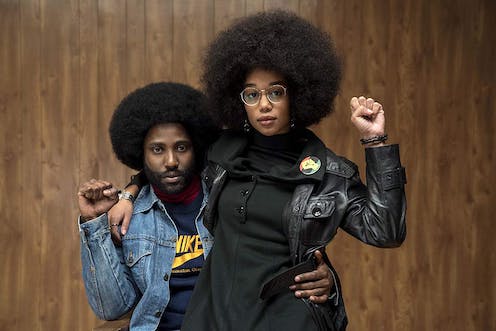 Ever since his 1989 film Do the Right Thing opened with Rosie Perez’s boxing-inspired dance to Public Enemy’s Fight the Power, Spike Lee’s cinema has...

Ever since his 1989 film Do the Right Thing opened with Rosie Perez’s boxing-inspired dance to Public Enemy’s Fight the Power, Spike Lee’s cinema has been driven by the tensions between power and race in America. Lee’s mostly black protagonists can only make it in their racist surrounds when they know their own power, and how to use it.

But Lee’s latest film, BlacKkKlansman, suggests their most powerful weapon against racism may also be a commonplace one - the English language.

Based on a true story, and set in 1970s Colorado Springs, BlacKkKlansman follows Ron Stallworth (played by John David Washington) as he becomes the city’s first black police officer and inflitrates the Ku Klux Klan. The film is both a pitch-perfect representation of the period, charting the parallel rises of the Black Power movement and the revised Ku Klux Klan under David Duke, and a deft indictment of Trump’s America. Everything and nothing has changed.

In BlacKkKlansman, English is not one language but many. Stallworth quickly distinguishes himself through his ability to code-switch between “black” and “white” dialects to manipulate, infiltrate and compromise power structures from within.

His first mission is to observe a rally by Black Power icon Kwame Ture, where he slides into “jive” with the Black Student Union President Patrice Dumas (“I can dig it, sister, I can dig it”).

But when he comes across a KKK recruitment ad, Stallworth woos local Klan members over the phone with his convincing imitation of a racist man with “pure-as-driven-snow white skin”. He will, of course, need a white stand-in to attend local meetings in his place, and his superiors initially question whether he can keep up the ruse.

Stallworth ends up regularly speaking with David Duke (played by Topher Grace), the Grand Wizard of the Klan. Their phone conversations, such as the following one, are darkly ironic: 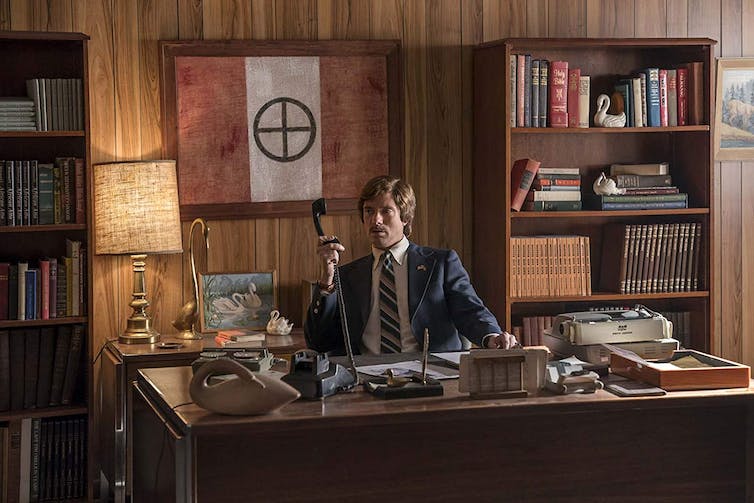 Duke: I can always tell when I’m talking to a Negro.

Duke: Take you, for example, Ron.

Duke: Yeah. Now, I can tell that you’re a pure, Aryan white man by the way you pronounce certain words.

Stallworth: Can you give me any examples?

Duke: Yeah, take the word ‘are’. A pure Aryan like you or I would pronounce it correctly: ‘are’. A Negro pronounces it ‘are-uh’. D’you ever notice that? It’s like ‘Are-uh… you gonna fry up that… crispy fried chicken, soul brother?’

Duke’s dialogue is deeply racist, and Lee cuts through its heaviness by having Stallworth and his white sergeant, who is eavesdropping on the line, struggle to suppress their shared laughter.

But the exchange reveals something else: Duke cannot code-switch. He cannot enter his adversary’s world, and as such will never be able to truly understand him - or identify him on the other end of the phone.

Passing, or presenting as another race (usually white) to escape discrimination, is a centuries-old practice crystallised in Nella Larsen’s 1929 novel, Passing. In Larsen’s book, two black women pass as white to sidestep the racism of 1920s society. And Stallworth’s stand-in is not just any WASP cop; his colleague Flip (Adam Driver) is a Jewish man whose need to deny his heritage to the Klan prompts introspection as to his own racial passing. 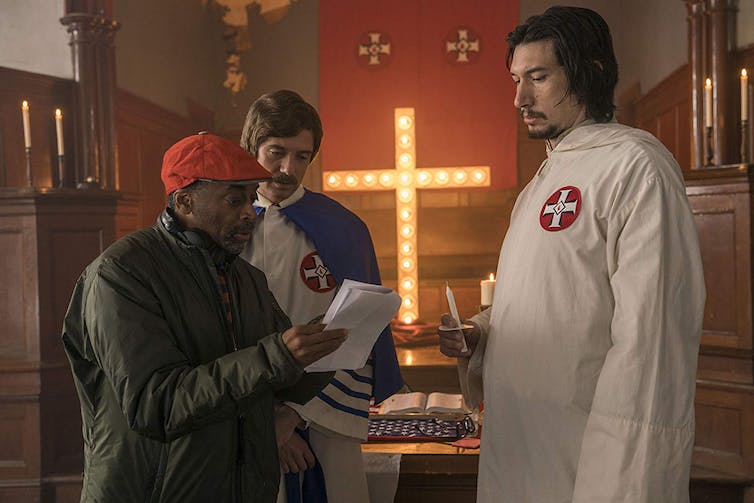 BlacKkKlansman is far from alone in representing such issues. Boots Riley’s 2018 Sorry to Bother You, a less hopeful but no less incisive look at linguistic racism, follows a black telemarketer, Cassius (Lakeith Stanfield) who learns he makes more sales if he speaks like a white person when pitching to white clients. In fact Cassius is so adept at using his “white voice” he is promoted to the prestigious sales role of “Power Caller”.

Linguistic passing also recurs in films like Justin Simien’s 2014 Dear White People and Jordan Peele’s 2017 Get Out. Fittingly, Peele was a producer of BlacKkKlansman, and brought Stallworth’s story to Lee in the first place.

Unlike the women in Larsen’s Passing or Flip in BlacKkKlansman, Ron Stallworth cannot pass as white when it comes to his appearance. Nor does he want to. Though he often disagrees about methods for black liberation with Dumas, who views his job as a “pig” as colluding with the enemy, he does not code-switch to hide from himself.

In fact, the film’s comedic climax lies in Ron’s triumphant reveal to Duke (“are-uh… you sure you don’t know [who I am]?”) He uses his ability to shift, chameleon-like, between his natural expression, the Black Student Union’s dialect and the pompous inflections of the Klan not to efface his identity, but to take down those who seek to threaten it.

Ron doesn’t fully belong in Dumas’s world, and he certainly doesn’t belong in Duke’s. Instead, he carves out a place for himself in the spaces in between. There, he can speak truth to power.