Artemisia Gentileschi’s 17th-century painting, Self Portrait As Saint Catherine Of Alexandria, became only the 21st work by a female artist to enter the London National Gallery’s collections in July this year.

In a collection totalling 2,300 works, this speaks volumes about Gentileschi’s exceptionality – both now and in her own day.

The painting depicts St Catherine of Alexandria, an early Christian martyr whose theological skills were said to have been so great that she was able to beat 50 of the Roman emperor’s shrewdest philosophers in a debate on the merits of Christianity versus Paganism. 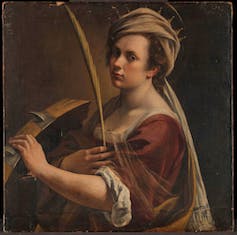 Gentileschi’s saint, by contrast, gazes directly out at the viewer while gripping the wheel of her martyrdom – an image of astonishing confidence and resoluteness that makes other treatments of the subject seem to pale in comparison.

Even more startling is the fact that the likeness is a self-portrait of the artist assuming the identity of St Catherine – making this an early form of role playing self-imagery that predates by centuries the preoccupations of contemporary artists like Cindy Sherman.

Born into the patriarchal oppression of late-16th century Papal Rome, Gentileschi transcended the path of utter obscurity that was the lot of her female peers to become, instead, one of the most famous painters of the day. 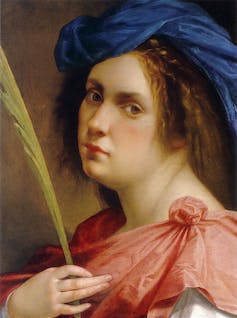 Artemisia Gentileschi, Self-portrait as a Female Martyr, circa 1615. Wikimedia

This achievement came at a cost. At the age of 17 she was entrusted by her father - also an artist - into the specialist care of a fellow painter who returned the favour by sexually harassing and abusing her to the extent that her father brought a charge of rape against him in the Papal courts.

The ensuing trial – with its salacious details and airing of the seamy side of the Baroque artworld – became the talk of the town and tarnished her reputation with a sexual frisson from then on.

The trial also played out – it should be remembered - within the context of an unremittingly hostile male culture that was many worlds removed from the empowering possibilities of the current #MeToo movement.

At the trial’s conclusion, Gentileschi’s only recourse to redress from this undeniably crushing experience was to seek a fresh start in a new city and agree to an arranged marriage engineered by her father – a marriage of convenience that did not last. Within a few years, Gentileschi had become a fully independent artist – both personally as well as financially. 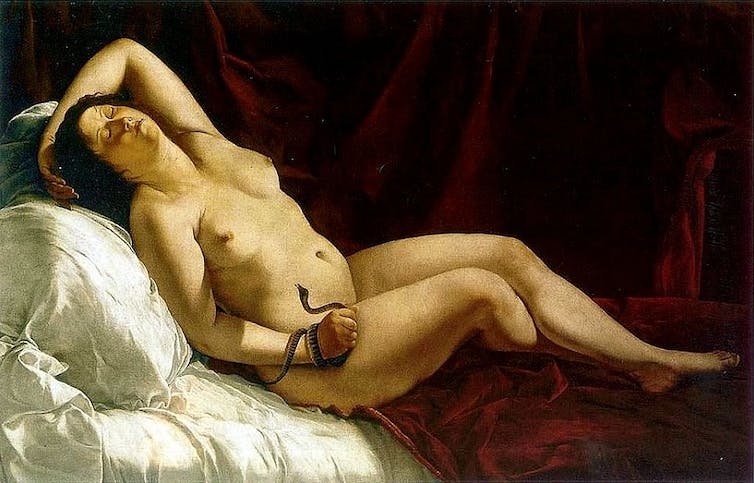 Gentileschi’s paintings continue to attract intense scholarship and admiration, tinged with occasional controversy and debate. Perhaps most famous is her signature depiction of Judith and Holofernes, painted in the immediate aftermath of the by now infamous rape trial.

It depicts the Old Testament heroine, Judith, decapitating the Assyrian general Holofernes, the villainous leader of an invading army that was at that stage poised to capture the Jewish city of Bethulia. The general lies spreadeagled on the bed on which he had hoped to seduce Judith. 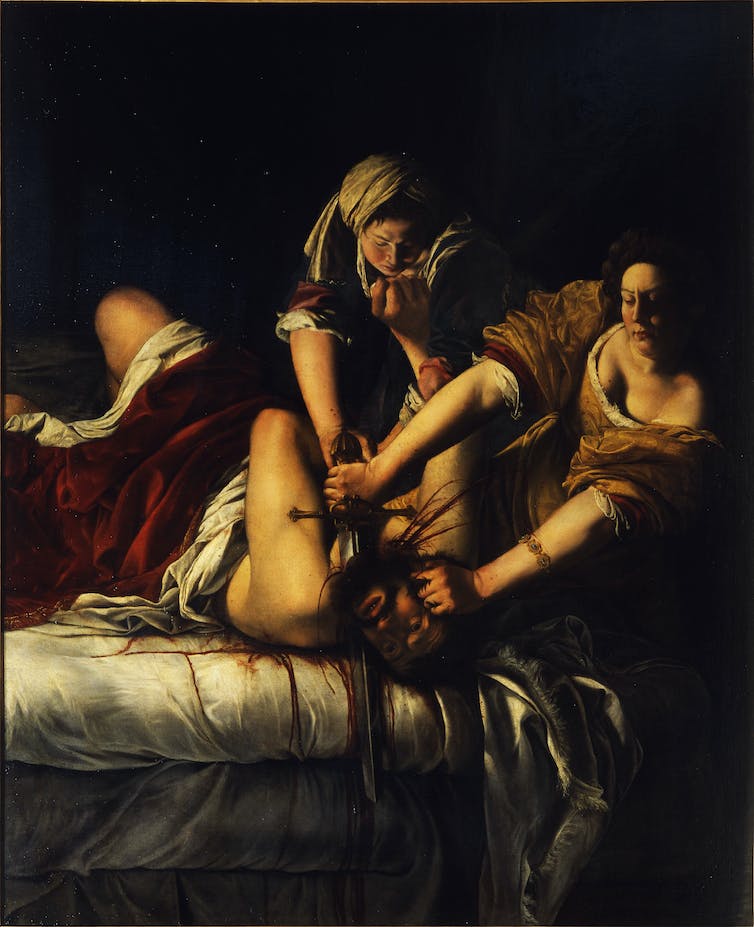 But Judith and her maidservant have got him drunk so that they are now able to bear down upon him from above, holding him still while cleaving his head from his body with the cool precision of a butcher slicing prosciutto. As Holofernes’ eyes glaze over and his defensive grip on the servant’s neck starts to weaken, the bed receives rivers of his blood and his half severed head begins to slide off from his torso.

You don’t have to be a psychotherapist to be able to read this painting as an obvious declaration of psychic revenge and empowerment against the injustice and humiliation perpetrated on female victims by would-be sexual predators.

It also constitutes one of the most unflinching depictions of extreme physical violence in the history of art and still retains its power to shock - even in today’s era of constant mass media horror.

But Gentileschi’s status as the triumphant heroine of Italian Baroque art has come under fire recently as our understanding of her output has deepened. A group of late paintings have come to light that appear to cast a shadow over her earlier works. One example is a large canvas of Susanna and the Elders now in the Pinacoteca Nazionale, Bologna.

This painting is signed by Artemisia Gentileschi and dated 1652. But it has been associated with a recently discovered document that records Gentileschi’s collaboration with a younger and totally obscure (male) artist named Onofrio Palumbo.

The recent suggestion that Palumbo may have contributed to the Bologna Susanna - a painting nonetheless signed as being by Gentileschi’s hand alone - raises a host of unresolved questions about the nature of the latter’s late career and workshop arrangements. 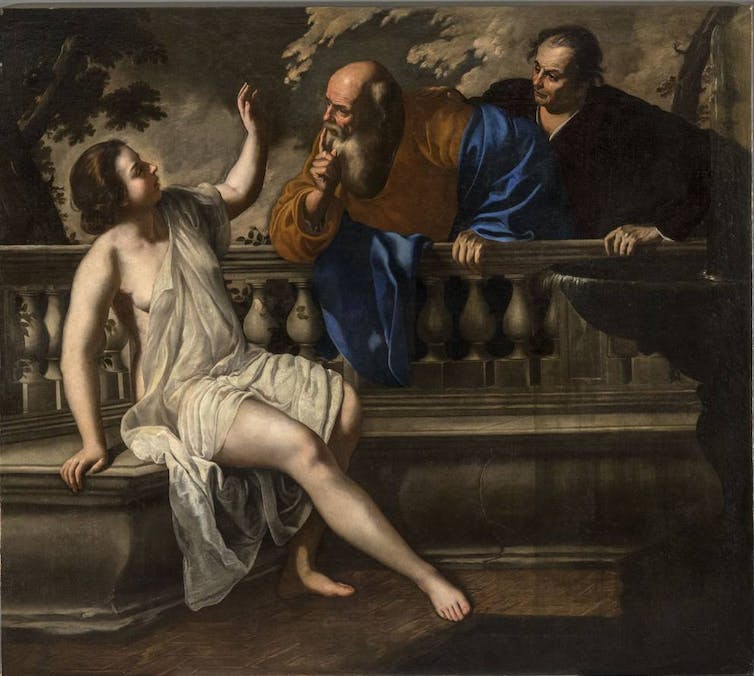 Read more: Still counting: why the visual arts must do better on gender equality

Palumbo’s contribution to Gentileschi’s later works might go some way to explaining differences between her earlier and later paintings. Gentileschi’s late paintings seem stylistically inconsistent both as a group and in terms of the diversity of approaches occasionally detected within single compositions. To some writers, this has suggested a significant lack of quality control in her late output.

Others have argued the need to reconsider Gentileschi’s late works in light of her attempts to advance herself during the latter stages of her career. Gentileschi evidently considered her rate of pay during this period to be an important factor contributing to the quality of a painting. She wrote to a patron:

But I can tell you for certain that the higher the price, the harder I will strive to make a painting that will please Your Most Illustrious Lordship.

‘The spirit of Caesar’

This frank admission of the importance of financial considerations for her art was evidently not something Gentileschi felt ashamed of.

It was part and parcel of the strategies she used to promote herself as an independent female artist who maintained a successful artistic enterprise during the latter stages of a career in a cut-throat, competitive art world otherwise dominated entirely by men.

Your Most Illustrious Lordship will not lose out with me … you will find [in me] the spirit of Caesar in this soul of a woman.

Strong words that have much to tell us about the complex, real-life concerns underpinning this artist’s extraordinary life and career.