There are more than 4,800 satellites orbiting Earth. They bristle with sensors – trained towards Earth and into space – recording and transmitting many different wavelengths of electromagnetic radiation.

Governments and media corporations rely on the data these satellites collect. But artists use it too, as a new way to image and view the Earth.

I work with Geoscience Australia and the “Digital Earth Australia” platform to produce time-lapse images and video of Australian landforms using satellite data.

My Open Air project, produced through a collaboration with Australian painter Emma Walker and the music of The Necks, features macro-photography of Emma Walker’s paintings set against time-lapse satellite imagery of Australia.

Open Air will be launched in Canberra on September 20, 2018.

We see satellites as moving pin-pricks in the night sky, or occasionally – as with the recent return to Earth of the Chinese Tiangong space station – as streaks of light. And most us would have heard about satellite data being used for surveillance, for GPS tracking and for media broadcasting.

But artists can divert satellite data away from a purely instrumental approach. They can apply it to produce new ways of seeing, understanding and feeling the Earth.

Of course satellites are expensive to launch and maintain. The main players are either powerful corporate providers like Intelsat, enormous public sector agencies like NASA and the European Space Agency (ESA), or private sector startups with links to these groups.

Luckily, many of these agencies make their data freely available to the public.

In Australia, Geoscience Australia‘s Digital Earth Australia platform provides researchers and the public with access to Australian satellite data from a range of agencies. 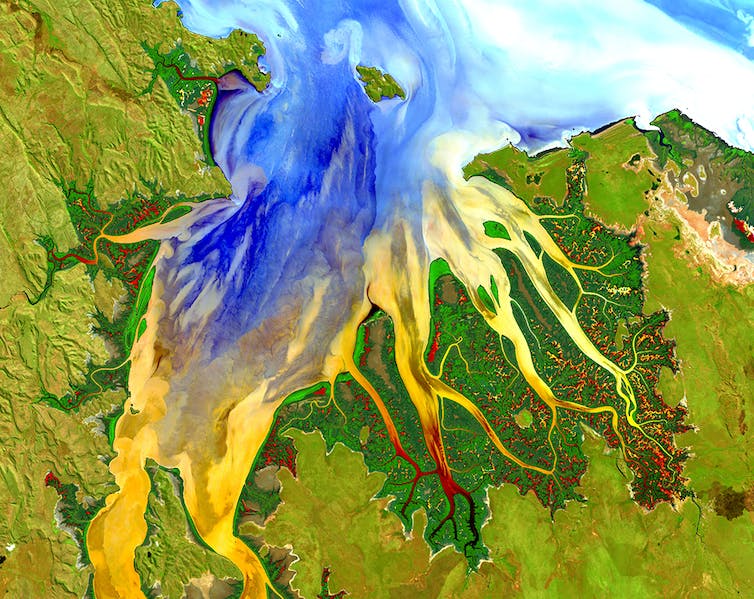 Landsat 8 image acquired in Australia in May 2013 over Cambridge Gulf and the Ord River estuary in Western Australia. Visible light bands highlight the different types of water within the estuary. Shortwave and near infrared bands highlight the mangroves and vegetation on the land. Geoscience Australia, Author provided

Understanding and processing the data

Making satellite imaging data accessible, though, is not the same thing as making it usable. There is considerable technical know-how required to process satellite data.

The Landsat and Sentinel satellites are used by scientists and the private sector to monitor environmental change over time, using what is known as “remote sensing”. They travel in the low Earth orbit range, around 700km above the Earth and circle the Earth in around 90 minutes. After numerous orbits, they return to the exact same spot every 16 days.

Landsat and Sentinel satellites are equipped with sensors that record reflected electromagnetic radiation in a range of wavelengths. Some of these wavelengths fall within the visible light part of the spectrum (between 390-700 nanometers). In that sense, satellites image the Earth in a way comparable to a digital camera. 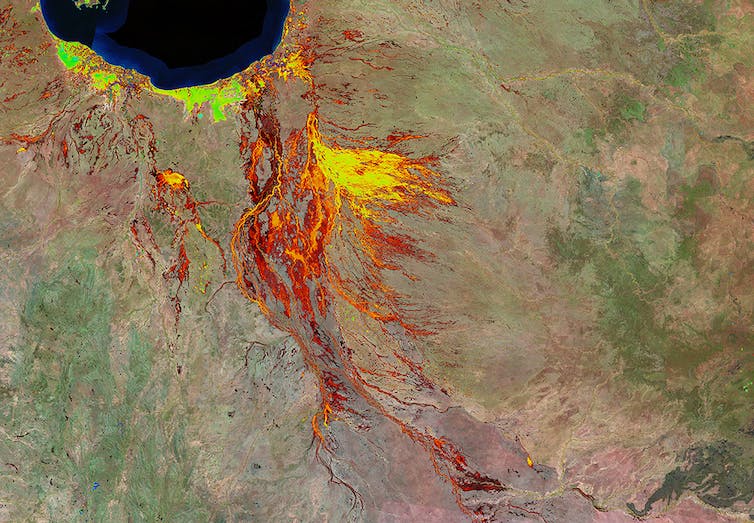 This image shows the percentage of time since 1987 that water was observed by the Landsat satellites on the floodplain around Burketown and Normanton in northern Queensland. The water frequency is shown in a colour scale from red to blue, with areas of persistent water observations shown in blue colouring, and areas of very infrequent water observation shown in red colouring. Geoscience Australia, Author provided

Read more: A sports car and a glitter ball are now in space – what does that say about us as humans?

But the satellites also record other wavelengths, particularly in the near and shortwave infrared range. Vegetation, water and geological formations reflect and absorb infrared light differently to visible light. Recording these wavelengths allows scientists to track, for instance, changes in vegetation density or surface water location that indicate drought, flood or fire.

A single satellite image is made up of numerous bands recording data in very specific wavelengths. Getting a full-colour image requires processing in a GIS application to combine them, and assign the bands to either red, green or blue in an output image. 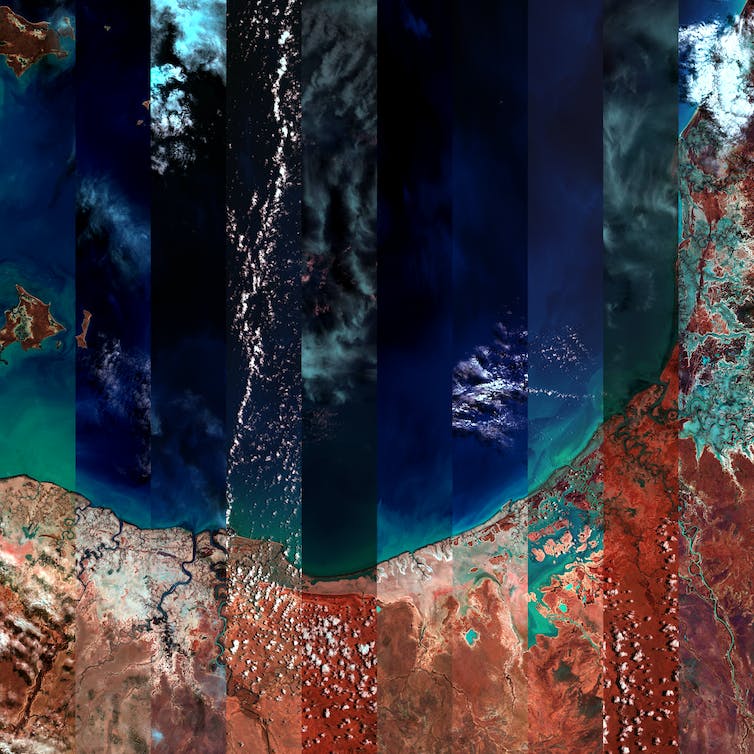 Images collected over 12 months at the Gulf of Carpentaria - 2016. Grayson Cooke, Author provided

Bringing creativity to the data

This is where creativity can enter the picture. Being able to create false colour images that combine infrared and visible light in different ways allows me to produce beautifully surreal images of Australian landforms.

The image below shows the variance in environmental conditions over 12 months in 2016 at the Stirling Range National Park in WA. 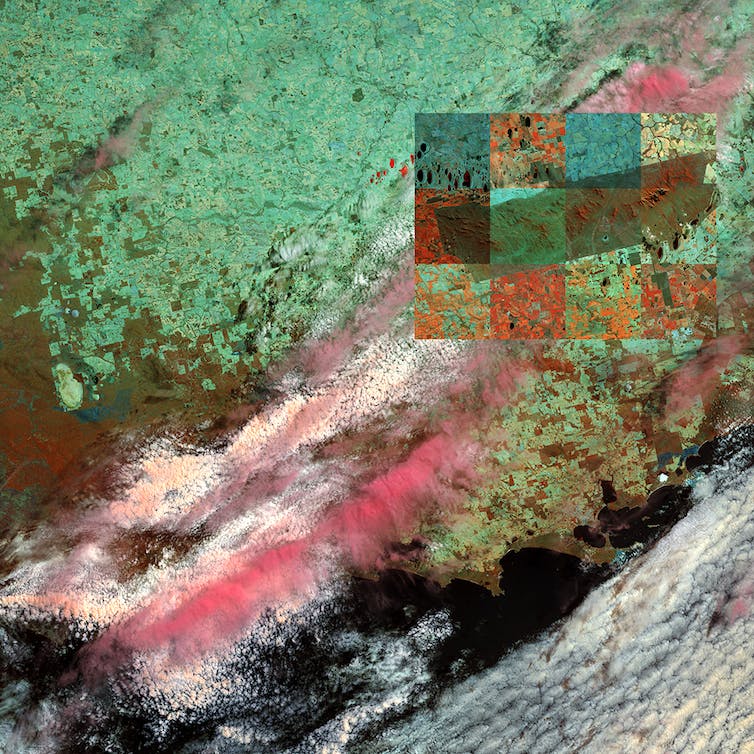 Because geoscientists need clear images of the earth’s surface to analyse, they filter clouds from the data. I chose to take the opposite approach, highlighting the incredible array of meteorological conditions experienced by the country.

Working with the Nevada Museum of Art, photographer Trevor Paglen will launch the Orbital Reflector satellite as an inflatable, visible sculpture, a prompt for wonder and reflection.

Artists place satellite data and usage in new contexts. They question surveillance practices and expose scientific tools and representations to new audiences outside science and the private sector.

The thousands of satellites winging their way around the Earth represent power and possibility, a chance to look again at the intersection between humankind and a changing planet.

“Open Air” will be officially launched at the National Film and Sound Archive in Canberra on September 20. It will also screen at the Spectra conference in Adelaide in October.