As urban planners, we have not been good at integrating land uses, such as homes, shops and offices, with our transport infrastructure. Thus many people find the nearest train or bus stop is too far too walk and too close to drive (even if they could be sure of finding parking). This has created what is commonly known as the “last...

As urban planners, we have not been good at integrating land uses, such as homes, shops and offices, with our transport infrastructure. Thus many people find the nearest train or bus stop is too far too walk and too close to drive (even if they could be sure of finding parking). This has created what is commonly known as the “last mile” problem.

In some Australian cities, hilliness and hot summers add to this problem. The consequences for people’s work commute are obvious. In the end, many people find it’s simplest to drive to and from work.

Over the past 12 months, something new has been promoted as the solution to the last mile problem. Shared e-scooters are reportedly on their way to Australia. Powered by a rechargeable battery, these are dockless, have a range of 20-60 kilometres per charge and a top speed of 24 kilometres per hour.

Read more: Don't ignore the mobility scooter. It may just be the future of transport 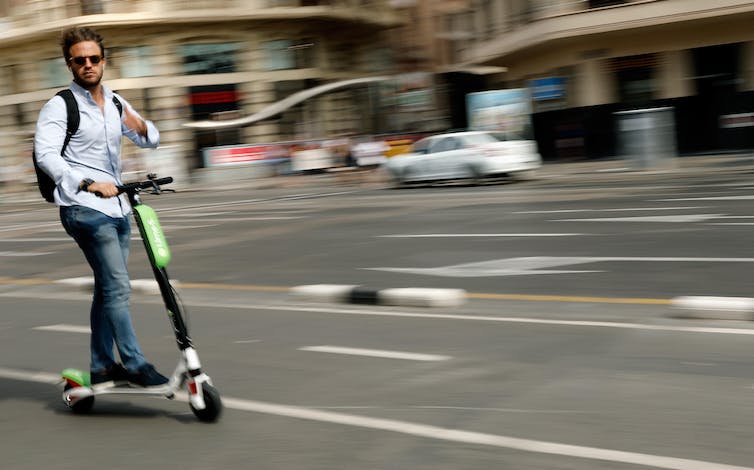 Electric scooters can travel up to 60km with a top speed of more than 20km/h. Juan Carlos Cardenas/EPA

Businesses on the move

The two main e-scooter companies, Lime and Bird, have attracted the most interest. Several other smaller companies have entered the e-scooter market this year, including Scoot, Skip and Spin.

While both are new ventures, Bird and Lime have raised considerable funding in a short time.

Bird, founded by a former Uber executive late last year, has a market valuation of US$2 billion after raising US$400 million in venture capital over the past four months. Bird has e-scooters in 74 US cities, Windsor (Canada), Tel Aviv and Paris, as well as on 22 university campuses.

Lime was founded in January 2017 as a bikeshare business, but has branched out to e-bikes and e-scooters in the past six months. It operates in 49 US cities and seven European cities, as well as on 20 university campuses, although e-scooters have not been deployed at all locations. A group of investors including Uber recently put US$335 million into Lime, which is valued at US$1.1 billion.

Some believe Uber will buy Lime as a step in its quest to build a multi-modal transport platform that provides car, bicycle and scooter sharing services.

What’s the appeal of e-scooters?

Uber is interested in e-scooters and e-bicycles because many of its ridesharing trips are short ones that could be made by e-scooters.

If Uber could shift its short-distance passengers from cars to e-scooters, it would be able to use fewer drivers and reduce operating costs. The remaining drivers would be transporting passengers over longer distances for higher fares.

Shared e-scooters provide a number of advantages over shared e-bikes. The rider can stand up which, for office workers, means no wrinkling of clothes. The posture is also easier for women wearing skirts and dresses.

Scooters are also easier than bicycles to manoeuvre along narrow paths. In some places, e-scooters are not subject to helmet requirements (unlike bicycles).

How to avoid the fate of dockless bikes

E-scooters are not without some disadvantages. Because they are dockless, they tend to litter footpaths, parks and even rivers.

This is similar to the problems presented by dockless share bikes. A number of dockless bike share companies have been forced to withdraw services in Australia because of this. 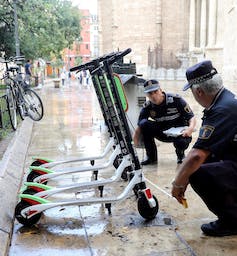 E-scooters have run into problems in Valencia, Spain, where police have removed them for failing to comply with city council regulations. EPA/Kai Försterling

Many communities lack appropriate means of regulating them. The question of whether e-scooters should be allowed on footpaths or only on roads and bike paths remains unanswered. (Given that they have a top speed of 24km/h, e-scooters travelling on footpaths pose a safety concern.)

Lime and Bird have tried to deal with these problems. For example, Bird has committed to a Save our Sidewalks (SOS) pledge and has encouraged other e-scooter share companies to do the same. The pledge has three components:

Adopting an Uber idea, Lime pays for people to collect and charge the scooters each night.

While we have no e-scooter share systems in Australia yet, both Lime and Bird are reportedly looking to launch here soon. How will they fare? Are Australian cities prepared for them?

Authors: Neil Sipe, Professor of Urban and Regional Planning, The University of Queensland