The Sydney suburbs around me are clogged with huge 4WD cars which have never seen a dirt road. I think people buy them because they think they are safer. Are they? – Petrina of Greenwich

The popularity of SUVs, 4WDs and commercial utilities is showing no signs of abating in Australia. In the first six months of 2018, passenger vehicles made up just one-third of new vehicle sales (down from 50% five years ago) and SUVs 43% (up from 29% in 2013). Six of the top ten models sold in this period were SUVs and commercial utilities. Clearly, increasing numbers of people are choosing these vehicles for reasons including image and versatility, but how is this trend affecting road safety?

Our analysis of data from safety tests and crash records suggests the move to SUVs is problematic for road safety in the case of large and small SUVs, as well as commercial utes. This is mainly because these vehicles put other road users at a higher risk of severe injury.

How do we measure safety?

To answer the question, “Are SUVs and 4WDs safer than other cars?” we need to decide first how to measure safety. One option is to consult test results from the New Car Assessment Program (NCAP), a global alliance that subjects new vehicles to standardised laboratory tests.

These tests mostly cover the performance of the car in a crash, including adult and child occupant protection and pedestrian protection. Instrumented crash test dummies are used to measure crash forces and then estimate the likely injuries to human occupants. “Safety assist” tests have been introduced recently to evaluate how well the car can avoid a crash, but we’ll focus on crash protection here.

The problem with NCAP and similar test programs is that these can include only a very small range of tests compared to those occurring in the real world on many different roads and speeds. And real-world crashes happen to real people of all shapes, sizes and ages, impossible to represent fully with a few different crash test dummies.

The MUARC-developed Used Car Safety Rating (UCSR) program aims to overcome this issue by developing ratings based on real-world crashes throughout Australia and New Zealand. The latest dataset contains information on over 7.5 million drivers involved in crashes between 1987 and 2015 for vehicles manufactured in the 33 years up to 2015.

Where individual vehicle models have been involved in sufficient crashes for meaningful results, these are rated on:

For this study we chose two vehicles in each of the large, medium and small segments: one SUV and one passenger car.

In the small vehicle class, we chose the Hyundai i30 hatchback and the Mitsubishi ASX, both top-three sellers in their under $40,000 segments.

The ever-popular Toyota Camry was chosen to match up against the Mazda CX-5 SUV in the medium (under $60,000) class.

In the large segment, the Toyota Kluger was the most popular SUV under $70,000 for June 2018 and second overall for the year. We compared it with the Holden Commodore, the best seller in the rapidly shrinking large car segment. The latest Commodore is too new to feature in the UCSR ratings, so we substituted the discontinued VF model.

Given that the Toyota Hilux is the most popular light vehicle overall in Australia, selling nearly 20% more units than its nearest competitor, we also included it in the large segment comparison.

According to the Australian NCAP (ANCAP) program, all seven vehicles offer their occupants excellent protection, being awarded five-star ratings.

For pedestrian protection, both small vehicles, the Hyundai i30 and Mitsubishi ASX, were rated “acceptable” by ANCAP.

In the medium segment the Mazda CX-5 was also “acceptable”, better than the “marginal” rating of the Toyota Camry.

Both the Commodore and Kluger rated “marginal” for pedestrian protection in the large vehicle segment. The Toyota Hilux surprisingly came out “good” in this test involving the projection of components representing a head and a leg onto a variety of locations on the front and bonnet of the car.

In the small vehicle segment, the i30 has a rating of 3.4, meaning the driver has a 3.4% chance of being injured if involved in a crash. The ASX scored 4.5, which because of statistical uncertainties in the estimates is not significantly different. However, it suggests this small SUV has around a 30% higher risk to its occupants in a crash.

In the medium segment, both vehicles were safer overall than their smaller counterparts, with ratings of 2.2 for the Camry and 2.6 for the CX-5. Again, these two ratings are not significantly different, but the medium SUV is about 20% less safe than the medium car.

Finally, the Kluger scored 2.3 compared with 2.0 for the Commodore, representing around a 14% increase in risk to its occupants in a crash. The Hilux scored 2.8, 40% worse than the Commodore.

The ASX and i30 were comparable with ratings of 2.6 and 2.8 respectively, the small SUV being slightly less likely to injure other road users.

No aggressivity rating is available for the CX-5, with the Camry scoring 3.0 and therefore being slightly more aggressive to collision partners.

In the large segment, the Kluger scored best with a rating of 3.5. The Commodore was around 25% worse with a score of 4.4. The Hilux had an aggressivity rating of 4.9, a significant 40% more injurious to other road users than the similar-sized Kluger.

Looking at a small selection of vehicles, as we did in this study, does not necessarily represent the story of the whole population. The charts below represent the Used Car Safety Ratings by vehicle type for the overall market. 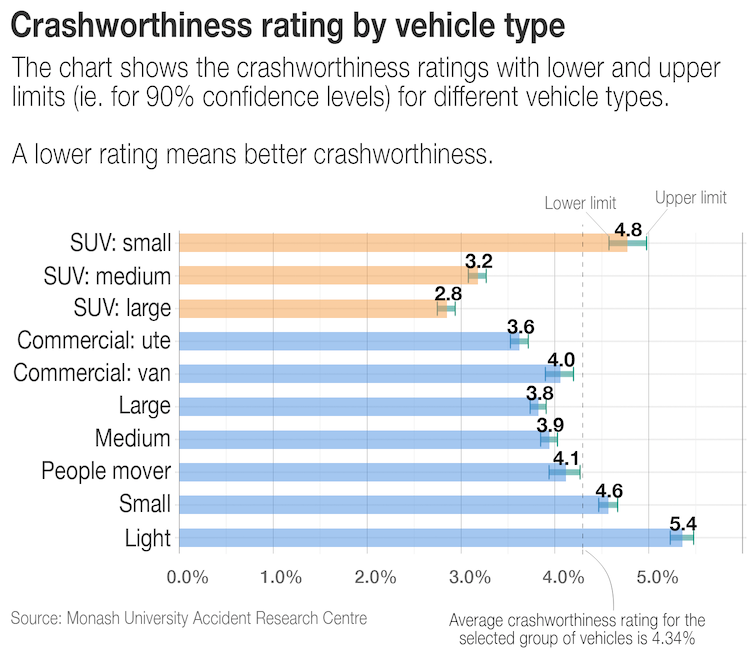 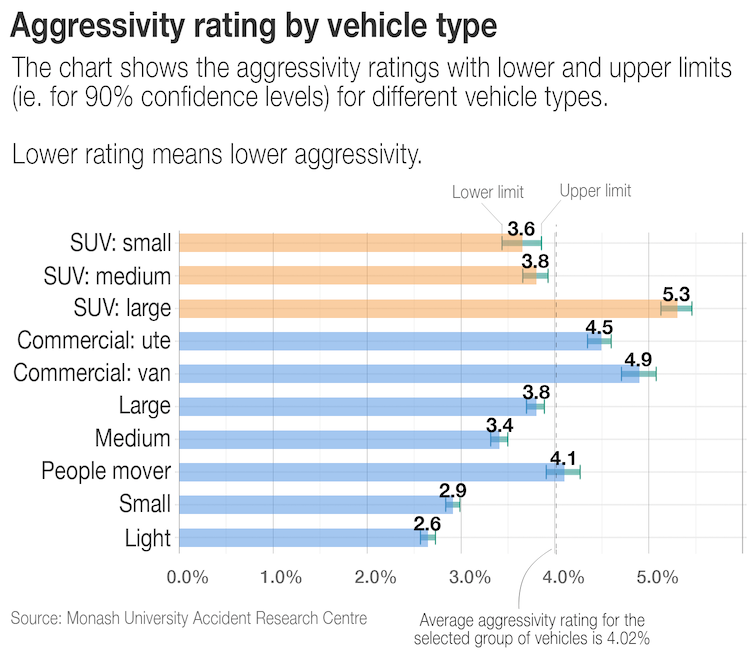 CC BY-ND While individual models vary, there are some important trends to be aware of: Medium and large SUVs perform on par with their passenger car equivalents with regard to occupant protection. Commercial utes also protect occupants as well as large cars. Small SUVs perform worse for occupant protection than small cars and are quite aggressive towards other road users, which is a poor compromise and problematic for a growing market group. Overall, mid-size vehicles — whether conventional passenger or SUVs — strike the best balance between protecting occupants and other road users. The big problem is the high aggressivity of large SUVs and commercial utilities – particularly the increasingly popular utes. This is largely a result of the high mass and ladder chassis construction of most of these vehicles, which is good for being tough but not good for running into other road users. Overall, the move to SUVs is problematic for road safety in the case of large and small SUVs, as well as commercial utes. This is because these vehicles, while not improving crashworthiness overall, put other road users at a higher risk of severe injury. Therefore overall road trauma will be higher with a shift to these vehicle types. * Email your question to alwayswondered@theconversation.edu.au * Tell us on Twitter by tagging @ConversationEDU with the hashtag #alwayswondered, or * Tell us on Facebook