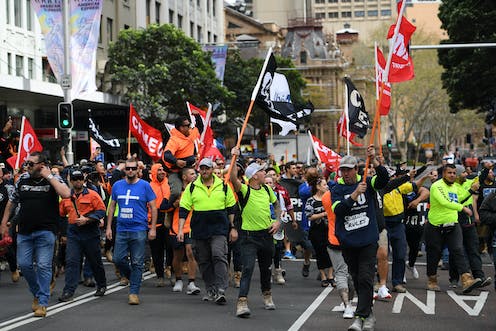 Since Malcolm Turnbull was ousted as prime minister, we have seen a renewed focus by the federal government on targeting union officials.

The latest, and also most enduring, target is the Construction, Forestry, Maritime, Mining and Energy Union (CFMMEU). Prime Minister Scott Morrison has even suggested the government could try to deregister the union.

Mergers and the CFMMEU

The CFMMEU is one of Australia’s larger unions, a merger of the old CFMEU (which in turn is the old building, mining and forestry unions) plus the much smaller Maritime Union of Australia (hence the extra M in the acronym) and the even smaller Textiles, Clothing and Footwear Union.

All union mergers go through a series of ballots. These led to ‘yes’ votes and the Fair Work Commission ratified the merger. This occurred despite opposition from employers and the federal government. Their opposition was ostensibly based on the idea of a single union having coverage of multiple points in a supply chain (as companies already do).

There is nothing new about such opposition. The original balloting rules, then requiring half of members to vote in any ballot, were introduced in 1972 by the McMahon Liberal government. Like the current government, McMahon’s was facing electoral defeat. It had failed to prevent the creation of the then Amalgamated Metal Workers’ Union, then legislated to thwart repeat occurrences.

Read more: Unions have a history of merging – that's why the new 'super union' makes sense

More than four decades later, after the FWC allowed the creation of the CFMMEU, the Turnbull government tried to introduce urgent legislation to stop the merger. That failed to pass the Senate after cross-benchers became disconcerted by the interference in workers’ affairs — and by the lack of action in other areas where more important monopolies had been created.

There was also nothing new about enmity between the government and the union, especially its largest division, representing construction workers. The establishment, twice, of the Australian Building and Construction Commission targeting the construction division, was the most obvious display of that.

The threat of deregistration

Having failed again, the Morrison government now seems to want to introduce legislation enabling the deregistration of the CFMMEU.

Registration gives unions some of the privileges of acting within the federal system of industrial regulation. The benefits for unions are much less than they used to be, when the whole award system was founded on registration of organisations of employers and employees. Now the system has a different constitutional basis and old procedures no longer matter. Minimum wage and other rules apply nationally, regardless of whether a union is registered.

So the main benefit now is that certain types of industrial action are immune from claims for damages by affected employers. That is, some types of strikes within the system are legal.

Even if the legislation were passed and the union deregistered, the law’s objectives would probably not be achieved.

In the past half century, there have been two occasions on which a union in the construction industry was deregistered, due to its militancy. The circumstances, however, were very different from now.

In both cases, the union concerned faced competition from within the union movement. The first case, in the 1970s, concerned the NSW branch of the Builders Labourers Federation (BLF). The second, in the 1980s, concerned its national office. Once the BLF was deregistered, other branches or unions, also militant, moved in and took over their membership. No such situation exists now.

If the CFMMEU was deregistered, the less militant Australian Workers Union (AWU) might take their members in some sites, encouraged by employers. Many members, though, would stay with the CFMMEU.

The union would, in effect, be forced to operate outside the law. This would be a rather ironic outcome, since the government’s complaint has long been that too often it operates outside the law. (However, many attempts to prosecute the union’s officials have failed – sometimes spectacularly).

The strategy to date of the government, and employers, has been to try to bankrupt the union through the courts. They have discovered the union has good lawyers and deep pockets.

But imagine how much more easily the union could avoid the regulators if it were no longer under the scrutiny or rules of the Registered Organisations Commission and could, for example, transfer funds between various versions of itself.

Overall, registration holds more benefits for unions than operating outside the system. That is why most stay registered. A deregistered CFMMEU would likely be considerably smaller and with fewer resources but, on the other hand, also more militant and dangerous for employers.

Many of the industries it covers — most obviously construction, but also mining, forestry and the waterfront — are very hazardous, and workers’ concern for safety lends itself to unionisation. Militant worker action would not go away simply because the union was outside the legal system.

For that reason, it is hard to see some employers genuinely promoting this push (as opposed to supporting it publicly, as part of a political attack on the union).

The government’s push for deregistration, along with a number of other actions in the area of industrial relations, should not really be seen as part of a strategy to bring industrial peace to the economy. It is best seen in political and ideological terms.

The ideological dimension arises from the fact that probably the only thing that unites Coalition MPs is a dislike or hatred of unions. It is probably the issue that most distinguishes Coalition and Labor candidates. So action on this front is one of the few things the new Prime Minister can do to try to unify his fractured party.

The other political dimension is an attempt to get the electorate to focus on industrial relations issues before the next election, in light of the government’s poor position in the polls. But this is a fraught strategy.

In the 2016 election, the Turnbull government ran a very hard anti-union line. Yet it appears that, on balance, industrial relations was an issue that favoured Labor rather than the Coalition. The additional swing against the government in seats where the ACTU campaigned appeared to more than make up for any gains in Voctoria due to the dispute over the Country Fire Authority. The broad anti-union campaign appeared to produce little benefit.

This is probably because unionism is a base issue. It is central to differentiating Labor and conservative members and supporters, but it does much less to sway swinging voters.

The danger is that putting the focus on industrial relations issues will just highlight the ACTU’s “change the rules” campaign. There has been a lot of on-the-ground work undertaken on that campaign. Its central claim is that low wages and insecure conditions are a result of rules rigged against unions.

Running an election campaign on a theme of union power is not likely to persuade many people, but it would take the government into territory that unions may like it to play in. It lost seats in 2016 on such a strategy, and would be on even weaker ground now.