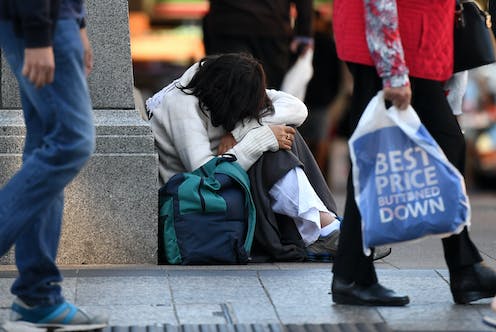 The purpose of our social, economic and political systems is to enable all Australians to lead good lives. Australia is doing well on some fronts. It ranks third out of 188 countries on the UN Human Development Index, which takes into account life expectancy, education and national income per capita. We also rank 19th on national income per capita.

This suggests Australia is rather good at converting national income into social well-being. But a key question is whether we are using our income in a way that will continue to enable all Australians to lead materially, socially and environmentally enriching lives. That is, are we acting in a way that is both fair and sustainable?

A report released by the National Sustainable Development Council, in collaboration with the Monash Sustainable Development Institute, provides robust data on many of the specific indicators related to environmental, social and economic well-being. These indicators give us a clear idea how well we are doing in the important goal of “leaving no one behind” and providing the same opportunities for future generations.

A remarkable feature of Australia’s economy is that, with some fluctuations, real income per capita rose by over 40% from 2000 to 2012, but has not increased at all since. This has left many people feeling stressed and disgruntled about living costs.

There is a sense that a high income is not enough to lead a good life – a continuously rising income is needed. Coupled with the high inequality in society and a worsening environmental footprint, it all points to threats to the sustainability of our current standard of living.

Read more: Growth without direction: How Australia measures up against UN targets

The large rise in income in recent years was accompanied by a decrease in the rates of poverty and material disadvantage, especially before 2013. The increase in the value of the age pension made a material contribution to this. In contrast, the falling relative value of Newstart has had the opposite effect.

Overall, inequality remains high by Australian and international standards. The government continues to play a very important role in offsetting at least some of this inequality. However, this is sustainable only if people remain willing to pay the necessary taxes and support transfer payments to help those with lower incomes.

Australia is also doing well in the health of the population. Life expectancy is among the highest in the world, reflecting comparatively low rates of illness and injury. Good health is supported by a well-resourced, universal healthcare system, substantial gains in reducing deaths from road accidents, and world-leading tobacco control policies.

And we do leave people behind. Indigenous people have much poorer health and lower life expectancy than the general population – a stain on our society.

Early childhood education is lagging behind, too

Australia is performing well in some areas of education: we have high rates of post-secondary school education, our students consistently perform well in collaborative problem solving, and Australian adults rate well above the OECD average in technological problem solving.

But, again, we’re performing poorly on sustainability. Student performance in literacy, maths and science on the international PISA tests has fallen and the percentage of children aged five who are developing normally in overall learning, health and psycho-social well-being has remained stagnant.

Australia is also a laggard among OECD countries in its public support of early childhood learning and development. The only improvement has been in language skills for children aged five.

In other societal issues, the Monash report showed that Australians are increasingly fearful of violent crime, despite low crime rates. Tougher laws have been introduced in response to this fear of crime, and imprisonment rates have risen significantly in recent years. This fear undermines social trust, which is very hard to recover and is a threat to the sustainability of our social cohesion.

Australia is also lagging on gender equality. Women continue to face far greater economic insecurity than men. This is particularly evident at retirement, when women’s superannuation balances are 42% below that of men’s, reflecting their substantially lower lifetime earnings.

Most disturbingly, the proportion of women and girls subjected to physical, sexual and psychological violence remains unacceptably high. Domestic and family violence remains the leading preventable contributor to death and illness for women aged 18–44.

Australia has done remarkably well on some of its UN Sustainability Development Goals. But there is definitely room for improvement, particularly in the way we are degrading our natural world and key areas of health, education and social inequality. We need to address these threats to sustainability if we’re going to ensure our people enjoy good lives now – and in the future.