I began my life as an activist academic in 1979 when the Western Australian government closed the Fremantle railway, saying buses would be better. Patronage immediately fell by 30% and I ran a four-year campaign to save the railway. We won. I have been writing books and running campaigns ever since on why trains and trams are better than buses. But I have changed my mind. The technology has changed, and I think it will end the need for new light rail.

“Trackless trams” are based on technology created in Europe and China by taking innovations from high-speed rail and putting them in a bus.

I went to China to check out the CRRC trackless tram (they call it autonomous rail transit, or ART). I came back convinced it’s a transformative transit technology.

Light rail is a connecting service. It joins up corridors or links heavy rail stations to surrounding areas and sometimes completes shorter corridors that lack rail lines. Buses were filling these functions in most cities but failing on two fronts:

Light rail had many success stories of competing with cars and attracting denser development, so commentators like me did our best to make them policy-relevant (see, for example, here, here and here). 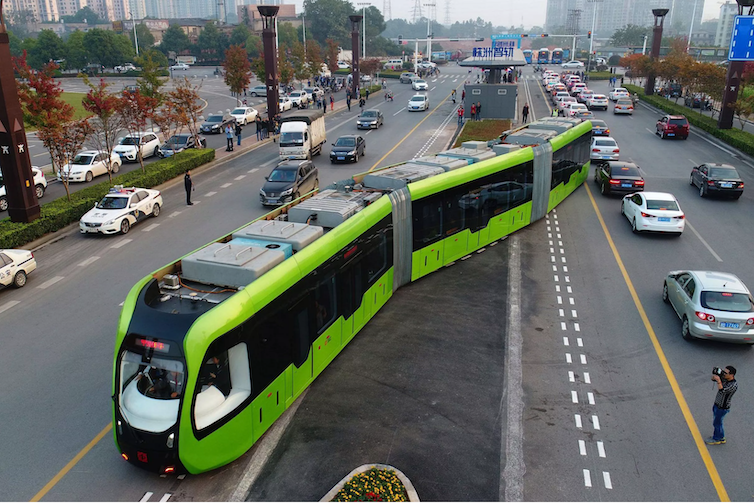 So what can the new technology do?

Trackless trams are neither a tram nor a bus, though they have rubber wheels and run on streets. The high-speed rail innovations have transformed a bus into something with all the best features of light rail and none of its worst features.

It replaces the noise and emissions of buses with electric traction from batteries recharged at stations in 30 seconds or at the end of the line in 10 minutes. That could just be an electric bus, but the ART is much more than that. It has all the speed (70kph), capacity and ride quality of light rail with its autonomous optical guidance system, train-like bogies with double axles and special hydraulics and tyres.

The first trackless tram rolled out for a road test in Zhuzhou, south China’s Hunan Province, on October 23 2017.

It can slide into the station with millimetre accuracy and enable smooth disability access. It passed the ride quality test when I saw kids running up and down while it was going at 70kph – you never see this on a bus due to the sway. 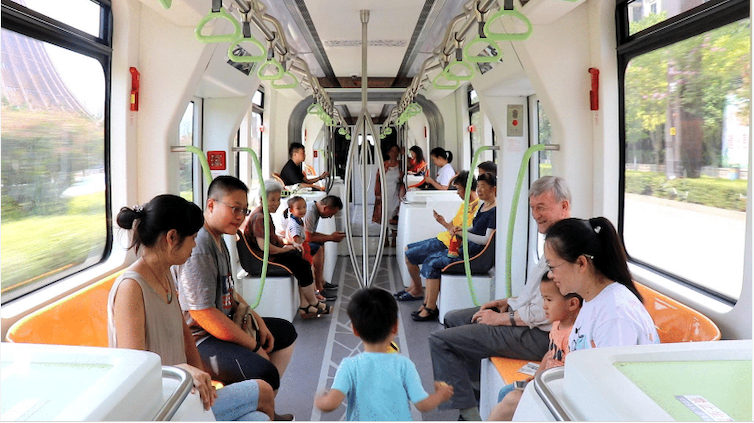 A child runs along the trackless tram with the author looking on. Author provided

The autonomous features mean it is programmed, optically guided with GPS and LIDAR technologies, into moving very precisely along an invisible track. If an accident happens in the right of way a “driver” can override the steering and go around. It can also be driven to a normal bus depot for overnight storage and deep battery recharge.

The standard ART system is three carriages that can carry 300 people, but it can take five carriages and 500 people if needed. In three years of trials no impact on road surfaces has been found.

The author discusses his conclusions after visiting China to assess the operation of trackless trams.

How do trackless trams improve on light rail?

Trackless trams can avoid the worst features of light rail – disruption and cost. It can take years to lay rail tracks, causing major disruption to local economies, as is happening in Sydney.

Similar disruption has happened in the Gold Coast, Canberra and elsewhere, but ultimately light rail systems have been highly successful in attracting patronage and land development. This will happen in Sydney too when the project is complete.

The trackless tram costs around $6-$8 million per kilometre. And it can be put into a road system over a weekend.

The big test is whether the trackless tram can attract development around its stations as light rail can. That is the missing link in our cities. How can we unlock urban regeneration and prevent our cities sprawling ever outwards with poorer and poorer suburbs while the well-placed inner and middle suburbs become more and more expensive?

The divided city needs something that can unlock affordable medium- and high-density housing in new urban centres across the city. Following many discussions with the urban development industry, I think the trackless tram can do this. The cost can be afforded as a contribution to any new development and will bring the uplift in land value that unlocks investment.

Trackless trams could be transformative for a city.

We have developed a model that means governments do not need to find all or even any of the capital costs. This is how trams were first built as real estate projects.

But governments are needed to manage the process and create the land assembly and other urban regeneration processes as well as community engagement. This will help show where best to route such a system and how to manage it as a transit system operating for the public good. Governments can help with risk management on the financing, as in City Deals. We have produced a guide and manual for how to do this.

Read more: Sidelining citizens when deciding on transport projects is asking for trouble

Australian cities are lining up

Cities across the world are lining up to trial these trackless tram systems. So far, Australian cities moving to use them are Townsville, Hobart, Melbourne (in Fishermans Bend and other sites), Sydney (in Liverpool and perhaps Parramatta Road where the first studies were done) and Perth – where five separate corridors are competing to run the first ART trial.

The table below summarises the main characteristics of buses, light rail and trackless trams, showing the improvements the new technology provides on key criteria. 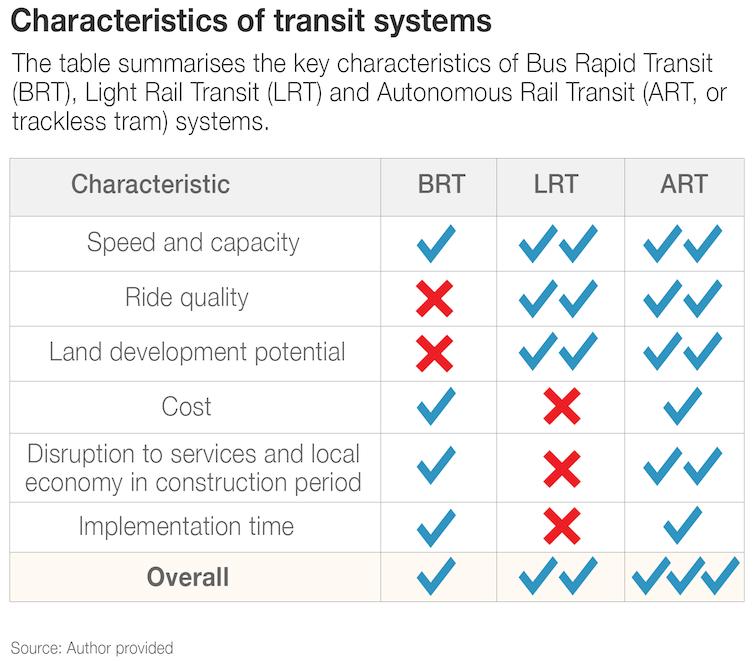 Others would rate some characteristics higher or lower, but for me the trackless tram looks a winner due to its ride quality, land development potential and cost. Time will tell if the early demand for ART translates into a real transformative change – a disruptive innovation. It reminds me of the early days of solar and batteries, which are now completely disrupting coal power systems.