Our society is replete with tales about the unobserved abuse of vulnerable people – in schools, kindergartens, child care facilities, psychiatric institutions, hospitals and the aged care facilities highlighted in the two-part ABC Four Corners report.

Read more: Aged care failures show how little we value older people – and those who care for them

Institutions are under pressure to deploy CCTV to deter abuse and provide evidence for discipline or prosecution. But this is controversial because it erodes the privacy of people in care, staff and visitors.

Some people are taking surveillance into their own hands by using private recording devices to detect abuse and thereby protect a loved one. Use of “grannycams” – undisclosed recording by an individual of what takes place in a senior’s room – is a variant of the “nannycam” used by parents who don’t trust the babysitter.

The use of such devices in places like nursing homes is likely to increase as people are sensitised to this surveillance through reports in the media and revelations by the royal commission.

What the law says

There’s no meaningful restriction on the sale of hidden recording devices. They are readily available through Australian shopfront retailers and online. Questions about legality instead relate to how they are used.

Those questions demonstrate the inadequacy of Australian privacy law – which is a very uneven and increasingly moth-eaten patchwork.

No jurisdiction has an overarching privacy statute. Some states, such as New South Wales and South Australia, have a law that specifically restricts covert recording by officials and by private individuals. But some of that law is seriously outdated because it is restricted to audio recording – centred on the wiretaps that feature in old Hollywood dramas – rather than illicit observation using cameras and other technologies.

Read more: We've had 20 aged care reviews in 20 years – will the royal commission be any different?

Some jurisdictions, such as the ACT, have gone further by enacting law that specifically deals with observation in workplaces and criminalises unauthorised recording. A workplace includes a hospital, school and aged care home – not just an office or retail mall.

The restriction of covert private recording in most other jurisdictions is potentially a matter for action under criminal law. But it’s conceivable that users of the devices would argue they were justified: a “public interest” defence in preventing a crime against vulnerable people.

Use of a grannycam is therefore legally problematic. We don’t have a large body of case law that gives clear examples of what is permissible and how courts in different jurisdictions will respond. 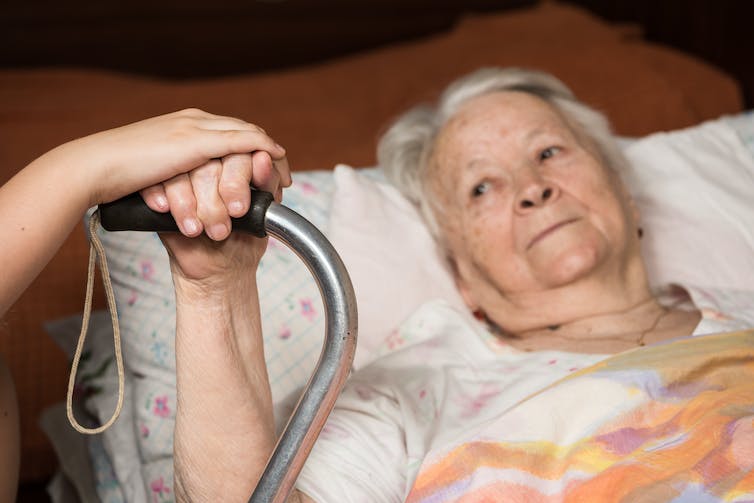 Courts would likely consider whether recording was justifiable and what was done with the recording. Volodymyr Baleha/Shutterstock

Aged care staff and visitors whose conversation and actions have been captured without their knowledge and thus without their consent can legitimately argue their privacy has been violated.

Despite language about “rights”, there is no overarching “right to privacy” at the national level. That’s one reason why we need a “privacy tort”. This would allow individuals to assert a right to privacy and gain compensation where that right had been seriously disregarded, similar to compensation for a physical injury attributable to malice or negligence.

Someone who has engaged in covert recording might argue it was ethically acceptable – “I did it to save grandpa from the abuser” – and that while it was legally wrong, in these very specific circumstances it could be forgiven by the court. Such forgiveness would thus treat privacy as a matter of balances.

Courts would likely consider whether recording was justifiable (for example, whether there was a reasonable belief that someone was at risk of harm) and, importantly, what was done with the recording. Providing the images to the facility’s managers, the Australian Health Practitioner’s Regulatory Agency (AHPRA) and the police as the basis for prosecution and protection of other elders is quite different from streaming audio of every conversation in the room or images of the elder in an adjacent bed using a bedpan.

Aside from the threat of legal action, covert surveillance also has other risks and shortcomings. Many surveillance devices are insecure and can be hacked. Recordings may be inadmissible as evidence. And they are likely to miss some abuse.

Ultimately, the best response to concerns about elder abuse will be achieved by improving the resource allocation, supervision of staff and management of aged care facilities, alongside a coherent national privacy and surveillance law reform.

Note: This piece does not represent legal advice on the part of the author or The Conversation.