Just a little to the left of the leftmost part of the “W” in the constellation Cassiopeia lies a binary system of a neutron star in a 27-day orbit with a more massive, rapidly rotating star.

But the find was something not predicted by current theory. This particular neutron star has a very strong magnetic field, yet jets from neutron stars had only previously been observed in systems with magnetic fields about 1,000 times weaker.

Read more: Explainer: what is a neutron star?

Neutron stars are dense stellar corpses, with about one and a half times the mass of the Sun squeezed into a sphere just ten kilometres across.

With enormous densities (similar to that of an atomic nucleus), they are the densest objects that can support themselves against their own gravity. If they were any denser they would collapse to form a black hole.

After a bright new burst of X-rays was detected from the location of this binary system, astronomers from across the world trained their telescopes on the source to try to determine what was producing them.

It turned out that the strong gravity of the neutron star in this system was capturing material thrown off by the rapid rotation of the other star. For many years this gas had been piling up in a disk of matter swirling around the neutron star. 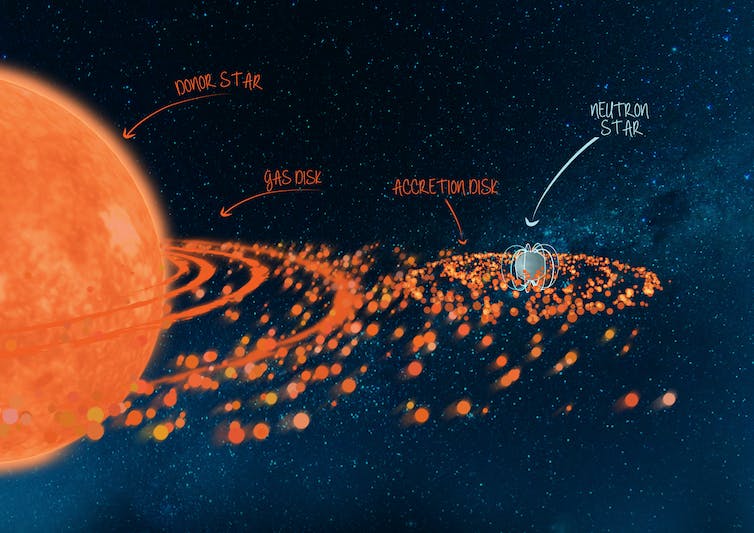 An artist’s impression of the binary system Swift J0243.6+6124 with a neutron star in a 27-day orbit and a more massive, rapidly-rotating donor star. ICRAR/University of Amsterdam, Author provided

When enough matter had accumulated, it all started to move inwards at once. We’re all familiar with a weight thrown from the top of a hill picking up speed as it falls. The physics behind this everyday phenomenon is the release of gravitational energy, which is converted into the energy of motion.

In exactly the same way, the gravitational energy of the mass was released as it fell in towards the neutron star. That energy was initially converted into motion, and eventually into X-ray radiation, which was what the Swift satellite detected.

Jets are narrowly-focused beams of matter and energy that travel outwards at close to the speed of light. They carry away some of the gravitational energy released when matter falls in towards a central object, such as a black hole or neutron star.

The jets deposit this energy into the surroundings, often at very large distances from the launch point.

In neutron stars and black holes that are only a few times more massive than the Sun, this energy can be transported many light years away. For supermassive black holes that lie at the centres of galaxies, the jets can carry away energy to hundreds of thousands of light years from the galaxy centre.

The first jet was discovered 100 years ago by the astronomer Heber Curtis, who noticed a “curious straight ray” associated with the nearby galaxy M87. Since the dawn of radio and X-ray astronomy in the middle of last century, jets have been studied extensively.

They are produced whenever matter falls onto a dense central object, from newly-forming stars to white dwarfs, neutron stars and black holes. The one exception had been neutron stars with strong magnetic fields - around a trillion times stronger than that of the Sun.

Despite decades of observations, jets had not been detected in these systems. This had led to the suggestion that strong magnetic fields prevented jets from being launched.

Astronomers need a new theory to explain these jets.

Our detection of jets from a neutron star with a strong magnetic field disproved the idea that had held for the past several decades. But it requires a re-examination of our theories for how jets are produced.

There are two main theories explaining how jets are launched. If a magnetic field threads the event horizon of a spinning black hole, the rotational energy of the hole can be extracted to power the jets.

But as neutron stars have no event horizon, their jets are instead thought to be launched from rotating magnetic fields in the inner part of the disk of gas surrounding it. Particles can be flung out along magnetic field lines in much the same way as a bead will move outward on a wire that you whirl around above your head.

If a neutron star’s magnetic field is sufficiently strong, it should prevent the disk of matter from getting close enough to the neutron star for this second mechanism to work. We therefore need another explanation.

Recent theoretical work has suggested that under certain circumstances it might be possible to launch jets from the extraction of the neutron star’s rotational energy.

Read more: Once upon a time ... 'sleeping beauties' and the importance of storytelling in science

In our case, this could have been enabled by the high rate at which matter was falling inwards. It would also explain why the jets that we saw were about 100 times weaker than seen in other neutron stars with weaker magnetic fields.

Whatever the explanation, our result is a great example of how science works, with theories being developed, tested against observations and revised in light of new experimental results.

It also provides us with a new class of sources to test how magnetic fields affect the launching of jets, helping us to understand this key feedback mechanism in the universe.