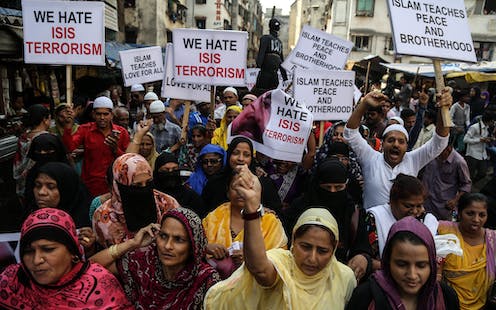 Since the Sept. 11, 2001 attacks in the US, Islam has become central to debates about social cohesion and national security in Australia.

Restrictions on Muslim immigration have been openly discussed – most recently by Senator Fraser Anning in his maiden speech to parliament – and many believe another terrorist attack in the name of “Islam” is inevitable.

Confronted with this reality, the media are playing an essential role in informing us about Islam and influencing how we respond. But, perhaps due to a limited understanding of Islam or a fear of antagonising Muslims, a fundamental point has largely been absent from reporting: the threat of terrorism does not stem from Islam. Rather, it stems from Islamism, a political ideology.

The two terms may sound similar, but Islam and Islamism are not the same thing. Islam is a faith observed by over 1.6 billion people, whereas Islamism is the political ideology of relatively small groups that borrow concepts like shariah and jihad from Islam and reinterpret them to gain legitimacy for their political goals.

How the media legitimises the aims of terrorists

Islamist groups like al Qaida and the Islamic State use violence against non-Muslims with the aim of establishing a political institution (“caliphate”) based on shariah law – neither of which have a basis in the Quran or hadith (Islamic prophetic traditions).

Part of the appeal of the Islamic State comes from its insidious ability to selectively use Islamic teachings and repackage them as legitimate religious obligations.

In particular, Islamists have appropriated the concept of jihad to legitimise an offensive “holy war” against non-Muslims. This interpretation, however, has been rejected by studies that have examined the Quran’s principles concerning war and peace.

Read more: Defeated in Syria and Iraq, the Islamic State is rebuilding in countries like Indonesia

Islamic teachings, for instance, prohibit terrorism and the use of violence against civilians. Further, Muslim leaders and scholars around the world have repeatedly condemned terrorism, issuing fatwas (Islamic legal rulings).

By reporting on this misleading interpretation of jihad and under-reporting Muslim condemnations, the Western news media reinforce the perceived connection between Islam and terrorism.

In some cases, media pundits explicitly make this link, pointing to the fact terrorists specifically refer to “Islam” as the basis for their actions.

This uncritical acceptance of terrorists’ claims and misrepresenting of Islam legitimises and unwittingly promotes the Islamist agenda.

In other words, the media plays into the hands of terrorists by allowing them to become the representatives for Islam and Muslims in general.

Islamist terrorists have a strategic interest in propagating the belief that Islam and the West are engaged in a civilisational war.

As the Islamic State outlined in its online magazine in February 2015:

Muslims in the West will soon find themselves between one of two choices.

The group explained that, as the threat of further terrorist attacks looms, Western Muslims will be treated with increased suspicion and distrust, forcing them to:

…either apostatize [convert] … or [migrate] to the Islamic State and thereby escape persecution from the crusader governments and citizens.

The Islamic State’s divide-and-conquer strategy is crucial to its ability to replenish its ranks with foreign recruits. The group targets disaffected and marginalised Western Muslims and invokes an Islamist narrative with promises of brotherhood, security and belonging.

In turn, the Western news media indirectly advance the group’s interests by repeatedly linking Muslim communities to terrorism and failing to meaningfully distinguish the Islamic faith from Islamist political ideology.

For example, as the first wave of Syrian refugees arrived in the UK in 2015, The Daily Mail warned of “the deadly threat of Britain’s enemy within” and associated refugees with the threat of “Muslim extremists”.

In the midst of the 2014 Sydney siege, The Daily Telegraph prematurely linked the Muslim hostage-taker with the Islamic State – a claim that was later dispelled by terrorism experts.

The impact of careless reporting

This kind of overly simplistic and sensationalist media coverage serves the Islamic State’s objective to pit Muslims and non-Muslims against one another.

As a study conducted at the University of Vienna in 2017 confirmed, media coverage that does not explicitly distinguish between Muslims and Islamist terrorists fuels hostile attitudes toward the general Muslim population.

With growing awareness of the impact of this kind of reporting, some media outlets like CNN have tried to distinguish between “moderate Islam” and “radical Islam”, “Islam” and “Islamic extremism”. But this, too, is misleading because it focuses on presumed religious motivations and overlooks the central role of Islamist political ideology.

A survey of almost 1,200 foreigner fighters by the Combating Terrorism Center revealed that over 85% had no formal religious education and were not lifelong, strict adherents to Islam. The report suggests the Islamic State may prefer such recruits because they are:

less capable of critically scrutinising the jihadi narrative and ideology.

Islamism masquerades as religion, but is much more a post-colonial expression of political grievances than a manifestation of the Prophet Muhammad’s teachings. While the establishment of a caliphate or shariah-based order is the expressed agenda of Islamist terrorists, this is not a religious obligation for Muslims.

And it is not an assault on Islam for non-Muslims to say so.

In an effort to strip the Islamic State of its legitimacy, some governments have advised news outlets in the UK and France to use the derogatory acronym “Da'esh” to refer to the group, although this is not always practised.

Malcolm Turnbull also adopted the term “Islamist terrorism” in order to differentiate between those subscribing to the Islamist ideology and Muslim communities.

But many politicians such as Donald Trump continue to blur the distinction by using rhetoric like “radical Islamic terrorism” instead.

Some argue that our “political correctness” inhibits us from tackling the problem head on.

But those who say the problem stems from Islam are are mistaken. We should be able to have a constructive conversation about the central concepts of Islam, including whether establishing a “caliphate” and committing violence against non-Muslims are indeed religious obligations or have legitimacy in Islam.

Given the extent to which concerns about Islam have impacted on our society, there is an ethical obligation to differentiate between Islam and Islamism – or at least present a counter to the Islamist perspective.