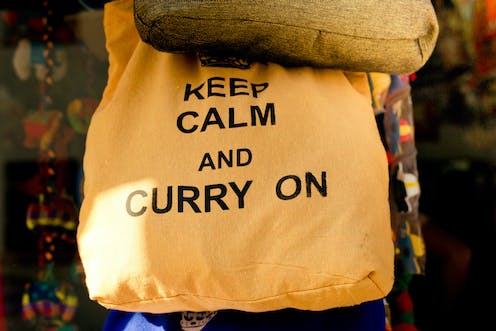 This is so exciting. I honestly… Sorry, it’s unbelievable — that I get to do stand-up comedy here at the Palais in Melbourne. Because I… I’m from Sri Lanka! And I used to be an accountant. Yeah. A Sri Lankan accountant!!! So — not just a money cruncher, but a curry-munching money cruncher!

Thaaat word … is it back again? For someone who has spent the last 30 years of her life specialising in English literary, postcolonial and cultural studies, I had never encountered it until I arrived in Australia 10 years ago.

On today’s episode of Essays On Air, a podcast from The Conversation, I’m reading my essay, titled The politics of curry.

Find and subscribe to Essays on Air in Apple Podcasts, Pocket Casts or wherever you get your podcasts.

Read more: When a suburb's turn for gentrification comes ...

Today’s episode was recorded and edited by Maggy Liu.

Today’s episode was recorded and edited by Maggy Liu.